One of modern society’s most argued-about subjects is unisex toilets.

Naturally, ITV’s This Morning followed up on the story with a discussion on today’s episode (August 17). 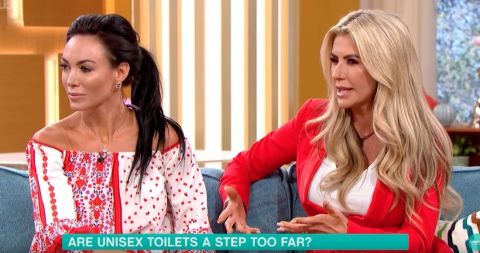 Opening the debate, presenter Mollie King asked: “Where do you stand on unisex toilets?”

Quick to respond, guest Dawn Ward (Real Housewives of Cheshire) said: “I’m saying that rather than building two toilets, do a unisex one and spend the extra money on hygiene.

“Going in a public toilet, I never sit on the toilet anyway, I squat. I don’t feel they’re hygienic.”

In response, Life on Marbs star Danni Levy argued: “All this gender-neutral stuff has gone too far… we cannot get past the fact that men have a penis and they use the toilet in a different way.” 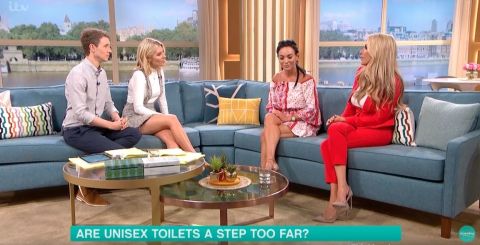 She went on to argue that fixing the problem in the Home Office was going to “cost more tax-payers’ money” and proved their lack of suitability.

Firing back, Dawn suggested using a “self-closing door” which male colleagues “can’t leave open”, before presenter Mollie asked if it was “sexist” to suggest “men’s toilets are dirtier than women’s” – but Danni wasn’t having any of it.

Loads of viewers reacted online to the debate too, with angry This Morning fans landing on both sides.

“A unisex toilet?! This World has lost the plot!” wrote one viewer, while another argued: “Men and women are different so we need different toilets.”

However, one user pointed out that “everyone literally has a unisex toilet in their house, and have done for generations. Perhaps you all get over yourselves and grow up.”

Another viewer agreed and suggested those “worried about men acting gross” should reconsider.

However, a common complaint with the segment was that it ignored the issue of sexual assault.

“As someone with a history of abuse,” began one commenter, “I couldn’t use a unisex toilet for fear of becoming a victim again. It’s too easy for bad men to have access to innocent people.”

What do you think – are unisex toilets a great idea or do they ignore important issues?