This Morning viewers got quite the shock today (September 20) as they turned on their TVs to see none other than the Supreme Leader of North Korea, Kim Jong-un, sitting on the sofa.

In a world exclusive interview with the ITV show, hosts Phillip Schofield and Holly Willoughby attempted to probe the controversial leader. 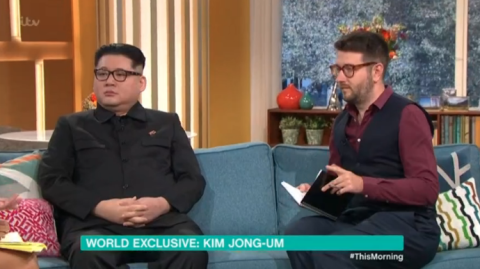 Alright, it wasn’t the real Kim, but he did look freakishly like him.

Viewers thought so too, with many genuinely convinced that Holly and Phil had pulled off the biggest scoop of the year.

One viewer tweeted: “Just walked back into my living room after making a cup of tea and nearly spat it out seeing Kim Jong-un on the sofa.”

While another wrote: “It took me way too long to realise that wasn’t the real Kim Jong-un on @thismorning.”

However, the entertainment didn’t stop there, with the Australian impersonator, who goes by the name Howard X, shocking Holly and Phil when he told them he once attempted to use his likeness to “get a shag”.

One amused viewer tweeted: “The moment Kim Jong-un talks about getting a shag on @thismorning. Your faces @Schofe and @hollywills . It got even better when you could see him talking about it as it cut to adverts. Another This Morning classic moment.”

And another wrote: “The Kim Jong-un lookalike on This Morning is hilarious just horrified Phil and Holly by saying he was trying to get a shag from one of the North Korean cheerleaders.”