Home » TV & Movies » Toni Collette: 'Some people stick to the rules, some question them'

In the 20-plus years that she's been on our screens, Toni Collette has tended to avoid playing characters she has much in common with. That, she reasons, would be boring. It means she wasn't ever like the awkward Muriel Heslop in her breakout film, P.J. Hogan's 1994 classic Muriel's Wedding. Nor has she been a suicidal hippie like Fiona in the 2002 British rom-com About a Boy. And (as far as she knows) neither of her children sees dead people, as her character's son did in Hollywood's 1999 supernatural flick The Sixth Sense. 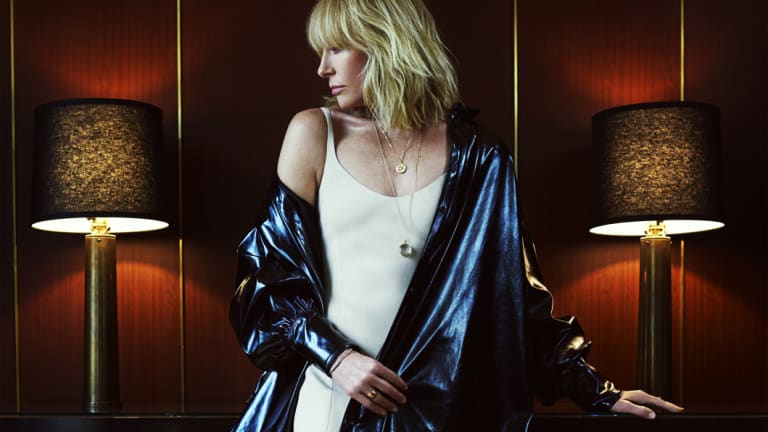 Toni Collette at 45: her latest role is the “best thing” she’s done, her husband told her. “It made me cry,” she says.

But Collette's latest role is as a therapist. And within a few minutes of her relaxing into a chair in the restaurant in London's West End where we meet, I suspect she's fairly good at giving profound advice. "Life is long," she says, scanning the menu and casting it aside in one smooth motion. "Some people stick to the rules, some people question who made them. And those people then pave their own way, which is a braver, more satisfying path, yes, but it's also a scarier one, you know?"

I think so. To be fair to Collette, we are talking about the themes of Wanderlust, a new drama co-produced by the BBC and Netflix, in which she plays Joy, a counsellor who tries to resuscitate her own marriage after a cycling accident. But gentle wisdom, smoothed by travel, seems to pour from her.

In Wanderlust, created by British playwright Nick Payne and beginning on Netflix in Australia on October 19, the inertness of Joy's sex life with her husband, Alan (played by the British actor Steven Mackintosh), forces her to consider whether monogamy is really all that – especially when temptation crosses her path in the form of a handsome stranger. As luck would have it, several of her friends and clients are grappling with similar levels of midlife dissatisfaction, including Alan. But will any of them act on their lustful impulses? (Spoiler: oh yes.)

"It's so honest and real, it'll be a conversation-starter," Collette says. "Everybody goes through the same stuff. When people get married, they're very idealistic, but it's hard to know how people are going to grow and change. And if you don't make an effort to [do that] together, you don't know what'll happen."

Shot in Manchester, the show is funny and immaculately observed, and the supporting cast – including Sophie Okonedo and Fresh Meat's Zawe Ashton – is superb. It's also full of fumbly sex scenes that are bound to raise eyebrows. The head of BBC drama recently said he was "terrified" by the potential response. "We've never seen anything like it on BBC One."

"I had to be quite … vulnerable with a lot of different people. It was quite intense," Collette says, treading carefully. "But in the scenes with Steven, I felt like an audience member at times, instead of being in there with him. He's so detailed in what he's doing."

Collette has had therapy over the years, but didn't immerse herself in research. Part of the point is that anyone, even Joy, can succumb to life's plot twists. "Most of us have a blind spot when it comes to knowing ourselves, and it happens over time. Growth can be painful. Initially fun, but then it gets more complicated." 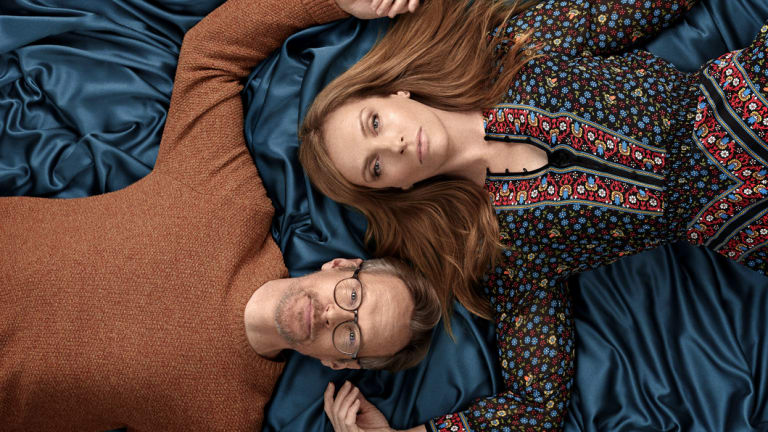 "Growth" appears to be Collette's watchword – it's mentioned 11 times over her salmon and broccoli – and a concept she believes in. Perhaps it's because she's an actor, thinking in terms of character arcs, but it might also be from experience.

Collette is now 45, with wavy blonde hair, a deep tan and a big and bright smile. It has been 24 years since Muriel's Wedding, the comedy about a young woman who dreams of having a glamorous wedding to enrich her personal life.

The film became an unexpected global hit, launching its star's career. Despite all that's happened since, to many fans Collette will always be Muriel. The stage musical version of the story was another hit in 2017, so much so that Muriel’s Wedding the Musical returns to Sydney and Melbourne in 2019, with expectations it will eventually make its way to the northern hemisphere.

"It's lovely that people are so fond of that character and story," she says. "I had no expectations. I appreciated it, and sometimes felt overwhelmed, but ultimately it was positive. That film changed my life, really." 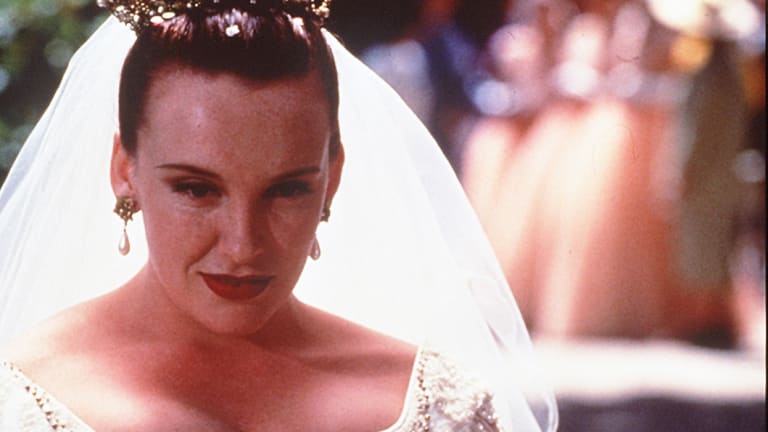 The eldest of three children, Collette was raised in Blacktown, in Sydney's west, by her truck-driver father, Bob, and her mother, Judith, who worked in customer service. As a child she was gregarious and athletic, swimming, playing sport and climbing trees. Eventually she channelled that energy into drama and found acting made her "feel alive. I could let emotion out instead of bottling things up. That was a relief."

She left school at 16 to try out for drama college, and a year later was starring opposite Geoffrey Rush in a Sydney Theatre Company production of Chekhov's Uncle Vanya. "No one really expected me to leave school, including my parents. But when they saw me in Uncle Vanya, they relaxed a little about it. They understood I wasn't kidding myself."

She worked selling jeans ("I still fold very well") and delivering pizzas, but soon a part in 1992's Spotswood, with Anthony Hopkins and a young Russell Crowe, came along. "I was so nervous on set, it was a blur." More folding, more pizzas, more plays. And then the next year, an audition for Muriel's Wedding. "And it was kind of non-stop from there."

In her 20s, the films got bigger, and the travelling further. In between stints in New York and LA, she bought a flat in Brixton, south London, where she lived for a few months during the filming of Todd Haynes's Velvet Goldmine in 1998.

In Brixton she later saw a man "getting his head bashed in with a pole 30 metres away. It was then that I was like, 'I gotta go'," she says with a laugh. They were heady days – literally, she once said she shaved her head five times, either for different roles or just because it was "cleansing" – and not always happy.

After Muriel's Wedding, much was made of Collette's 19-kilogram weight gain for the part ("Every time Toni opened her mouth," the director, P.J. Hogan, once claimed, "I put a doughnut into it") and subsequent swift loss.

She has spoken before of struggling with an eating disorder and panic attacks, but doesn't seem keen to revisit those experiences.

"I had to put on weight for another film later on. Sometimes you have to do that as an actor," she shrugs, sounding both blithe and firm. 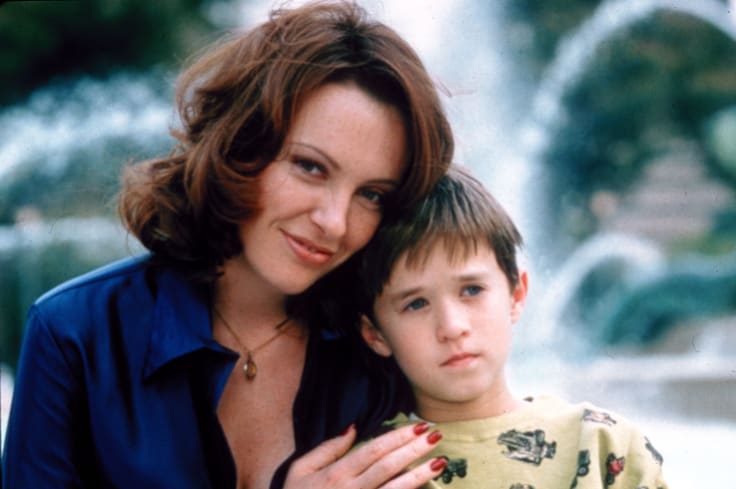 Collette in 1999’s The Sixth
Sense

Even at 26, Collette tried to vary her roles. A turning point was Velvet Goldmine, Haynes's drama about glam rock in which she "effectively played Angie Bowie" opposite Jonathan Rhys Meyers. The pair later had a short, and reportedly tumultuous, relationship. That isn't revisited, either.

"I wouldn't have been on a casting list for Velvet Goldmine, but I muscled my way in and I'll be forever grateful. It was pure glee," she says. "Before, I was playing characters who were self-conscious, a bit wallflowery." It might have been the confidence boost she needed: her next film, The Sixth Sense, gained her an Oscar nomination in 2000.

While briefly living back in Sydney in the early 2000s, Collette went with a friend to see her boyfriend's rock band, Gelbison. Playing the drums was Dave Galafassi, who spoke to her afterwards, and a few days later they met again at a house party. 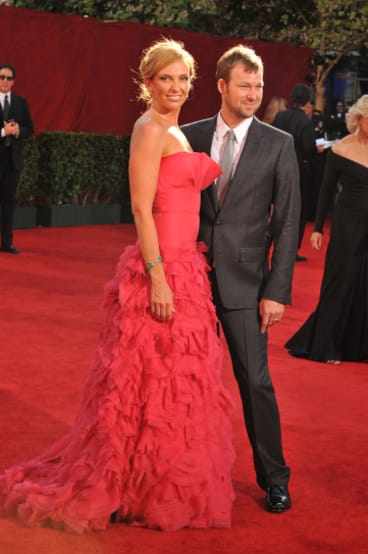 "He was the first person I saw when I walked in the door. He kissed me on the cheek and I just kind of melted. I planned to stay for 10 minutes … I was there for 12 hours," she says. "It was a good day."

The couple have now been married for 15 years. They plan to return to Sydney one day, but currently live in Los Angeles with their two children, Sage, 10, and Arlo, 7. It seems by all accounts a happy marriage. They have even worked together: Toni Collette & The Finish, a band featuring Collette as singer and Galafassi on drums, toured Australia a decade ago.

Has Galafassi seen Wanderlust, I wonder? Collette goes misty-eyed, which is slightly alarming. "All of it. He's really open-minded and pretty aware of what life can throw at people," she says. "The one thing he did say was, 'This is the best thing you've ever done.' It made me cry."

Despite rarely playing the lead, Collette has no regrets about parts she's taken. Not even turning down Bridget Jones, due to commitments on Broadway. People used to ask her why she plays so many mothers ("It's like saying, 'How is it being a man?' 'How is it, breathing?'") but all she looks for are interesting roles.

"If I'm just standing around, being someone's girlfriend, how boring is that?" she says. "Especially these days, when I leave my kids to go to work, I want it to be as worthwhile and invigorating as possible."

She has seen the film industry change a lot, but never more so than in the past two years. "Women are gaining power back, which is not only essential but exciting. There's still a long way to go but, man " – she bangs the table – "make a noise and things do change. The whole #MeToo thing is about bullies taking advantage of an assumed inequality, which to me means they're an unevolved person." 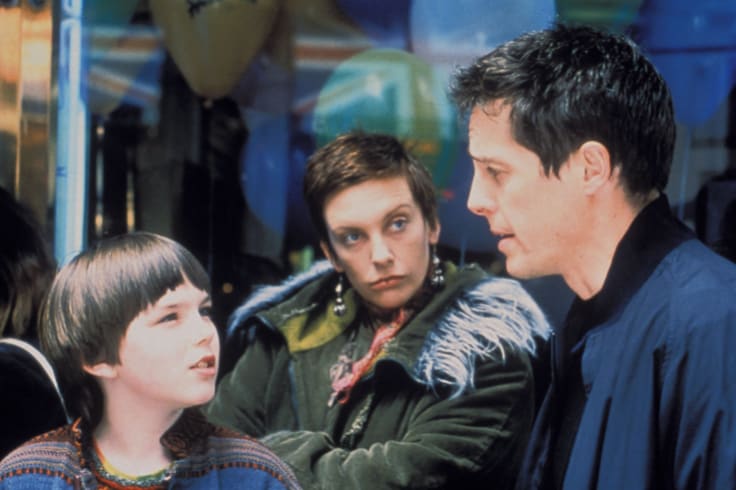 With her personal life steady and her outlook quite terrifyingly zen, Collette is taking greater control of her work, too. She's been executive producer of (and starred in) one of the year's hit films, Hereditary, and plans to begin directing soon. She has about five other projects on the go, among them Unbelievable – a true story about a teenage girl who is charged with lying about being raped – and an art-world thriller, Velvet Buzzsaw, with Jake Gyllenhaal.

Ageing bothers her not a jot. "People say, 'Oh you're middle-aged now in this industry, blah.' And it's like, 'So what? It's not important to me.'" But she has changed – sorry, grown – since her 20s. "I used to love going out, I couldn't get enough, but now that's not what I want to do. I've always been drawn to the spiritual side of life and that has deepened as I've gotten older. The mind and the heart are the most important things."

Yoga and meditation play their part in keeping that mind and heart healthy, but a cross-trainer at home sees to the rest. "I'm healthy, yeah, but trying to live longer is ridiculous. It sounds trite, but the best you can do is to understand yourself, be kind and present in every moment."

And, of course, avoid playing characters like yourself. "Yes, I think that helps," she says with a smile. "I mean, I'm still here, aren't I?"

Edited version of a story first published in The Telegraph (UK).

To read more from Good Weekend magazine, visit our page at The Sydney Morning Herald or The Age.