Note: The following article contains spoilers for Upstart Crow and a 400-year-old play.

It’s taken a few centuries years, but literary fans finally have the secret origin of Shakespeare’s A Midsummer Night’s Dream thanks to Upstart Crow.

David Mitchell’s comedy series was back for its third series on BBC Two on Wednesday (August 29), and the premiere was all about Shakespeare putting the finishing touches on his best-known comedy.

Only, Burbage (Steve Speirs) and the other members of his acting company didn’t really find A Midsummer Night’s Dream very chuckle-worthy, so they encouraged him to punch it up with a few more jokes and fewer creepy love potions. 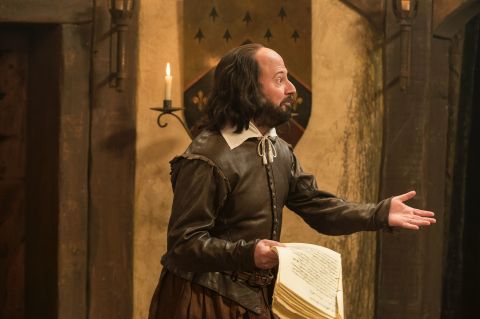 “It’s a Midsummer Night’s Snooze Will,” the gang protested, with a disgusted Kate complaining: “Is your play suggesting that a drugged person could give consent?!”

Throughout the episode, it was revealed that Shakespeare had actually based the comedy of errors on his own love story with wife Anne Hathaway (Liza Tarbuck), who he’d planned to woo with a love potion.

In fact, it was a “puckish sprite” in the employ of the Fairy Queen that gave Will the potion that won him the love of “dear sweet Anne”, his reluctant pregnant bride. Unfortunately, there was a small side effect of Will going bald (or partially bald).

“My midsummer play be not mimsy whimsy, but gritty realism,” he insisted.

But, in the end, Anne revealed that she never even used the potion because she never needed an enchantment to love Will. This alternate history of A Midsummer Night’s Dream endlessly entertained many viewers:

As always, there were a few detractors. Admittedly, they were entertaining!

There was also a fun guest appearance from comedy great Nigel Planer, as an odious-but-rich nobleman out to win over Kate (Gemma Whelan):

There’s a full series of Upstart Crow to follow throughout the autumn, and then a festive Shakespearean special to come during the Christmas season as well.