Doctor Who‘s David Tennant is used to hanging out in boxes that are bigger on the inside, so that’s probably why he wandered into a closet in an exclusive outtake from Hang Ups.

Digital Spy has footage that fans of the new Channel 4 comedy series did not see in Tuesday’s (August 15) episode, which included Tennant in a cameo as one of Dr Richard Pitt’s (Stephen Mangan) web therapy patients.

Watch below as Tennant’s character Martin severely tests Dr Richard’s patience by role-playing as Jerry Hall in order to avoid being sommelier for his party guests:

The new sitcom is adapted from Lisa Kudrow’s Web Therapy, the web series that migrated over to US pay channel Showtime for a few years before bowing out in 2015.

Hang Ups‘s clever format of brief video therapy sessions allows the show to fit in lots of celebrity cameos as Dr Richard’s patients — and that’s exactly what this first series does. 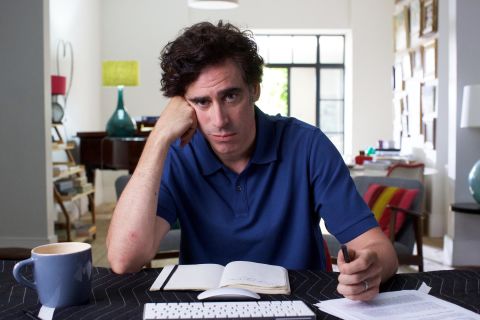 Fans also seem to be rating the UK adaptation, which might be down to Mangan’s efforts to avoid directly remaking Web Therapy.

“With a few notable exceptions, shows that are made in one country and then remade in another country – for commercial reasons – don’t normally work,” he admitted. “I’ve just spent the last seven years in a show called Episodes which is about exactly this scenario.

“But then watching it [Web Therapy] and thinking about it, we realised that the central premise is a really good one, so we took that central premise and made an entirely different show.”