You thought Los Angeles was hot? Selling Tampa is here to prove us wrong. Along with seasons 4 and 5 of Selling Sunset, Netflix announced that they’re working on a spin-off, Selling Tampa, that will definitely keep viewers on their toes just like the original. With a new city to explore and so many dreamy properties on the market, things are bound to heat up. So get ready, because you’re definitely going to want to hit play as soon as it lands on Netflix.

Here’s everything you need to know about Selling Tampa.

So how is Selling Tampa connected with Selling Sunset?

You might be asking, “Wait, when did the Oppenheim Group open a Tampa office?!” Well, they haven’t. This series will actually follow a completely different brokerage, Allure Realty, that are doing their own thing on the East Coast.

However, they’re both under the Selling umbrella, so there’s no doubt that you’ll be just as obsessed with this new series long after you finish watching.

What is Selling Tampa all about?

According to Netflix, “Along the Florida coast, Allure Realty stands out among the crowd. Owned by military vet Sharelle Rosado, this all Black, all female real estate firm has its eyes set on dominating the Suncoast. These ladies are equally as fun as they are fiercely ambitious, with all of them vying to be on top of the lavish world of luxury waterfront real estate. Sharelle has big plans for her brokerage and won’t let anyone or anything get in the way of making her dreams a reality.”

Who will be starring in Selling Tampa? 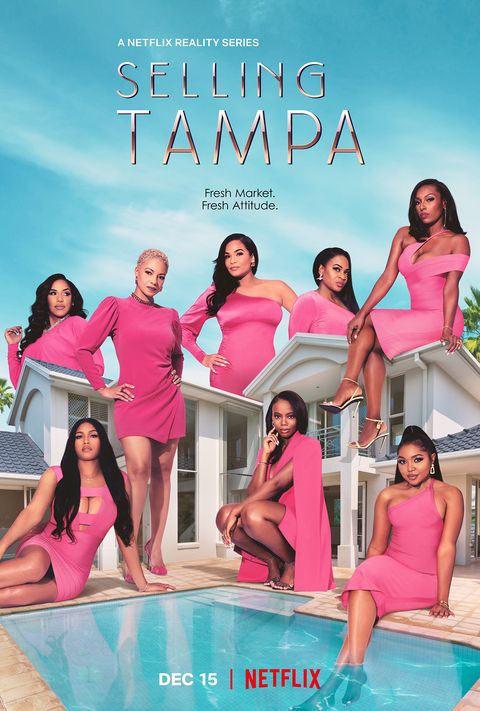 When will Selling Tampa premiere?

Get ready to mark your calendars, because Selling Tampa is coming up soon! Netflix revealed that the new series will be released on December 15. The first season will include 8 episodes that will run at 45-minutes each, so there’s plenty of time for tons of drama and excitement.