Home » TV & Movies » 'Wonder Woman 1984': Everything You Need To Know About The Dreamstone

The Dreamstone is totally insane, and we’ll help you get a grip on what exactly it does 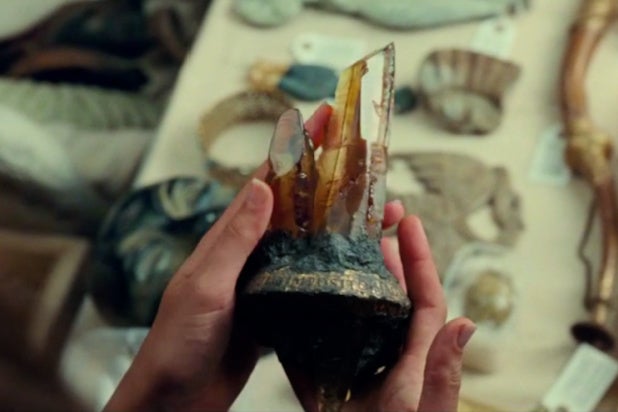 Amidst the magical lassos, flying superheroes, and invisible jets, at the core of “Wonder Woman 1984” is a story that we can all relate to: the desire to have our greatest wishes come true. During the events of the film, Diana (Gal Gadot) and Barbara Minerva (Kristen Wiig) come into contact with something called the Dreamstone: a mysterious and ancient object that has the power to grant wishes and desires to anyone who comes in contact with it.

The magic properties of the Dreamstone are essentially how Barbara eventually becomes Cheetah and how Steve Trevor appears back in Diana’s life. But since the Dreamstone was made by the God of Lies, it means that everything comes with a price — it’s a Monkey’s Paw kind of situation. Although Diana and Barbara don’t realize the full effects of the Dreamstone until much later, Maxwell Lord (Pedro Pascal) is very much aware of what the stone does.

He manages to get it in his possession before anyone realizes its powers and wishes to become the stone itself so he can gain its power to grant wishes. Being the embodiment of the Dreamstone also allows him to be in control of everyone else’s desires, which puts him on the dangerous path to becoming a powerful influential figure — one that Diana must stop before he destroys humanity.

In the film, the Dreamstone’s purpose is pretty easy to understand, though the mechanics of it will pretty much blow your mind if you think about them too hard. I mean, we’re talking about a rock — and then a person — that grants literally any wish anyone asks.

As we see in the film, these wishes are literally altering the fabric of reality and any number of paradoxical ways. Fr example, an Englishwoman wishes that all the Irish people in England be sent back to Ireland, and immediately outside the window we see cops arresting an Irishman to deport him.

How does that work? Assuming all the people involved there are real and not just manifestations of the Dreamstone, it certainly seems like actual reality has been altered in a huge way. It’s as if somebody went back in time to pass a law that will in the present round up all the Irish people in England.

And with everyone wishing at the same time at the end of the movie, it’s not too difficult to imagine these myriad changes to reality conflicting with each other, as there will inevitable be folks making mutually exclusive wishes that are all granted.

It’s an impossible thing to wrap your head around because it’s paradoxical. You can’t parse it logically. While “Wonder Woman 1984” doesn’t really dwell on the ramifications of all this, aside from foreshadowing some kind of unspecified cataclysm that may just be a standard collapse of civilization — but could instead be something much worse, like the time apocalypse threatening the world in “Tenet.”

The comic book version of the Dreamstone is different, but could give us some insight into what’s going on in “Wonder Woman 1984” — as well as provide a potential non-paradoxical explanation for the chaos.

In the comics, the Dreamstone allows whoever wields it to see dreams, bring those dreams into reality, and reshape one’s own reality. And if the stone was destroyed in any way — as it essentially is when Lord inhabits it in the film — it would destroy all of existence by shredding the fabric of space-time.

But this new Dreamstone contained millions of flaws in its structure, and so when someone else tried to use it to take over the world like Max does in “Wonder Woman 1984,” it spawned millions of parallel universes, each of which having the ability to destroy the real world.

As you can see, the movie version of the Dreamstone doesn’t have a ton in common with the comics version. The creator of the stone in “Wonder Woman 1984,” this alleged God of Lies, is not even a thing in DC Comics. But the idea of the Dreamstone spawning alternate realities is super interesting. Are we seeing that happen in the film? Could the chaos of the end of the movie be, beneath the surface, a war between these realities?

It’s impossible to know with the way “Wonder Woman 1984” glosses over these concerns. But it’s certainly a fun thing to think about.

“Wonder Woman 1984” did what most superhero movies do: it took a notable piece of DC lore and changed it to fit it to the story, while retaining a few very specific aspects. (Lord absorbing the stone so only he could have its power is reminiscent of Doctor Destiny making the stone so powerful, only he could wield it.) But in this case, it worked for the story. The Dreamstone gave “Wonder Woman 1984” a foundation on which to build that humanity: a way for Diana to see her long-lost love again, and a way for Barbara to realize getting what you want doesn’t always mean everything is easy.

Now, if we could only get the Dreamstone to wish away most of 2020…