WWE star Roman Reigns paid a visit to the Good Morning Britain studio, where he discussed what it was like to be WWE Universal Champion ahead of tonight’s Raw show at The O2.

The wrestler defeated Brock Lesnar at SummerSlam earlier this month to claim the title, and he shared that he was delighted to have overcome “adversity”.

“It was awesome,” he told Kate Garraway and Charlotte Hawkins. “I think any time in life, when you have a goal and you’ve been chasing towards something – and you’re just sticking to a drill and you’re consistently going after that dream and then occasionally run into a roadblock or an obstacle or some adversity – that’s been the past year, two years for me. 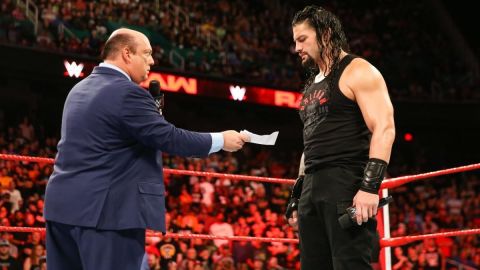 “Just constantly running into this wall called Brock Lesnar. And finally, I was able to put all the pieces together.”

The star also chatted about his family’s connection to wrestling.

“My father and uncle were The Wild Samoans back in the ’70s,” he said. “That was a time back when it was more professional wrestling.

“There were territories, and being in England, there’s a lot of history as far as professional wrestling here. So it’s just really neat to see my family lineage, and also with the business, our company, the WWE.”