The YouTube ad begins with a volume sign, its familiar white bar dancing left then right before finally switching to mute. For one second, there is only the mute sign against a black background. And then, abruptly, the grisly, zombielike face in a nun's habit leaps at the viewer, accompanied by a piercing sound.

The jump-scare ad was over in an instant, but it's apparently so startling to many who've seen it that their complaints reached YouTube, which decided to take it down.

Myriad Twitter and Reddit users complained about: 1) having to watch an unskippable ad that interrupted their YouTube viewing time, and 2) nearly suffering a heart attack in the wee hours of the morning while binge-watching YouTube videos. 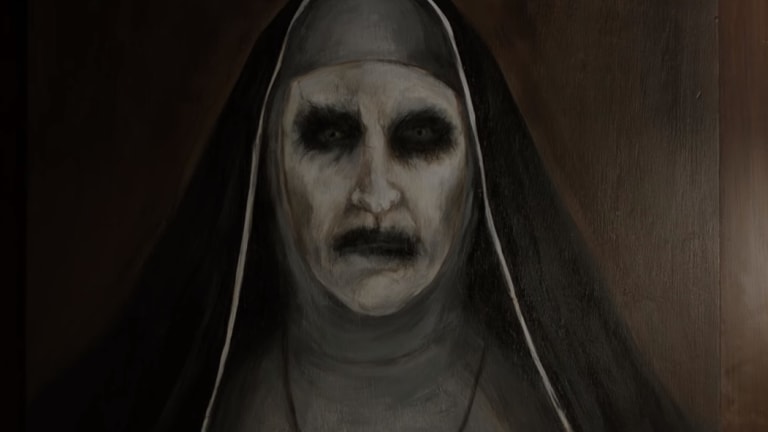 An ad for horror film The Nun has been pulled from YouTube.

"I advise you look away and/or turn down the volume if you have anxiety or just straight up jumpscares, pls rt to save a life," says one tweet that has been retweeted 130,000 times since Sunday.

Google, YouTube's parent company, has advertising policies that prohibit what it considers to be shocking content. Ads that contain "gruesome or disgusting imagery" and that "are likely to shock or scare" aren't allowed on the platform.

A jump scare is a technique commonly used in horror movies. For several seconds, the character sees or hears nothing, and then suddenly, something or someone appears from behind, or in a nearby mirror.

"A good jump scare is a magic trick," screenwriter C. Robert Cargill told The Verge. "It's 'I'm going to get you to look over here while I'm doing this,' and then out of nowhere – bam! – something's going to get you."

Jump-scaring is also an old school internet prank that was pretty synonymous with trolling on mid-2000s forums. It still exists – YouTube viewers have probably stumbled across a bait-and-switch video before, or seen one of the many reaction videos where people subject themselves to some of the worst pranks out there on camera.

But an ad from a major motion picture company is an unexpected place for these pranks to pop up.

The Nun, the story of a novice nun and a priest sent to investigate the suicide of a Romanian nun, conceived by Aussie horror maestro James Wan and screenwriter Gary Dauberman, uses the same technique in its arguably scarier trailer.

The main character, Sister Irene, is walking down a dark hallway with only a gas lamp to light her path. The camera shifts from her to the hallway. When the camera moves back to her, there's a faceless nun standing a few feet behind her.

A representative for the film's distributor, Warner Bros. Pictures, did not immediately respond to a request for comment.

This has been a year of reckoning for objectionable content on YouTube, although most of the controversies have been about content uploaded to the site – and not the ads that play before it.

At the beginning of the year, YouTuber Logan Paul vlogged a dead body in a Japanese forest, resulting in the loss of his access to premium ad revenue from YouTube. Last week, YouTube banned conspiracy theorist Alex Jones from the platform altogether for violating their community guidelines, which includes prohibitions on hate speech and harassment.

The Nun opens in Australian cinemas on September 6.