Up to 20 people are feared dead after a sightseeing plane crashed in the Swiss Alps – hours after a family of four were killed when their small aircraft went down in a forest.

The old-time propeller plane crashed on the Piz Segnas mountain above the Swiss Alpine resort of Flims on Saturday.

Authorities provided few details about the second crash, but local airline JU-AIR said one of its Ju-52 airplanes, which seats 17 passengers along with two pilots, had crashed. 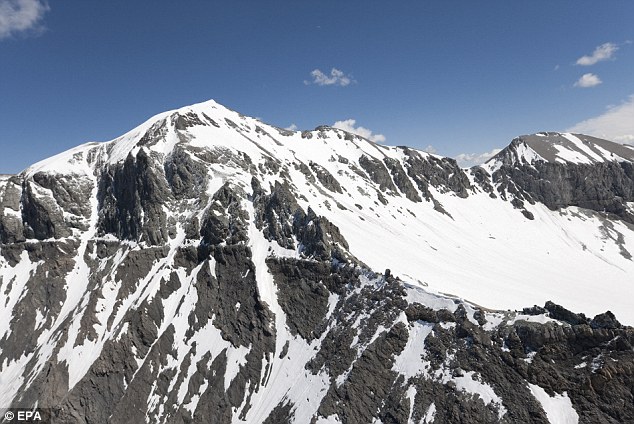 The old-time propeller plane crashed on the Piz Segnas mountain above the Swiss Alpine resort of Flims on Saturday. Pictured, a file photo shows the mountain

It was not clear how many people were on the plane.

But local newspaper Blick reported that all passengers aboard the plane were killed.

The planes can accommodate 17 passengers and three crew, according to Blick.

The area is popular with hikers and includes a glacier.

Earlier on Saturday, a small plane crashed in the Rengg mountain pass area in the canton of Nidwalden, killing two parents and their two children. JU-AIR said one of its Ju-52 airplanes (above, file photo), which seats 17 passengers along with two pilots, had crashed Both crashes were under investigation.

Ju-Air said on its website: ‘We have the sad duty to announce that one of our Ju-52 aircraft had a accident today.

WHAT IS A JUNKERS Ju-52 PLANE?

The German trimotor transport aircraft were manufactured between 1931 and 1952.

In the 1930s and 1940s, they were used by the military and for commercial purposes.

Before the Nazis seized control of Junkers, they were used as a 17-seat airliner mainly by Lufthansa.

Later, they flew with the Luftwaffe – the aerial branch of the Germany military forces during the Second World War – to transport both troops and cargo as well as briefly as a medium bomber.

It could carry 18 fully equipped soldiers or 12 stretchers when used as an air ambulance.

The Ju-52 continued to serve military and civilian air fleets into the 1980s.

‘At the moment, no further information is available.’

Based out of Duebendorf in canton Zurich, Ju-Air offers sightseeing, charter and adventure flights with its three midcentury Junkers Ju-52 aircraft, known affectionately in German as ‘Auntie Ju’ planes.

Police said on Twitter that five helicopters and a large rescue mission were deployed to the scene of the accident.

The airspace above the crash site was closed by the country’s Federal Office for Civil Aviation.

Police gave no information on casualties, but said on Sunday they plan a news conference in the afternoon.

Swiss police confirmed that a Ju-Air plane with the registration HB-HOT was the one that crashed.

Switzerland’s civil aviation authority closed the airspace above the site after the crash.