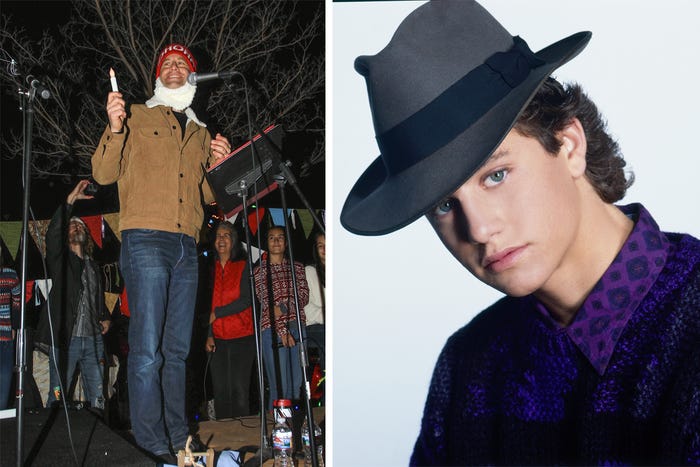 Actor Kirk Cameron led a group of around 100 people in Christmas carols outside The Oaks mall in Ventura, California, in protest of COVID-19 restrictions on Tuesday night.

Despite record coronavirus spikes in the area, Cameron has been leading what he calls a "Christmas Caroling Peaceful Protest," in opposition to Gov. Gavin Newsom's state-wide stay-at-home order. Cameron told ABC7 News that attendees were encouraged to wear masks, but masking was not enforced.

In footage NBC 4 shared on Tuesday night, a mask-less crowd can be seen singing. Cameron shared his own amateur footage of the events on Instagram.

Local officials are concerned that the gatherings are potential "super-spreader" events.

The Oaks released a statement on social media Tuesday calling the caroling sessions "irresponsible, yet constitutionally protected." The mall is also currently home to a COVID-19 testing site.

"Liberty and freedom are very fragile and they come with great responsibility," she said following the first event. "Continuing to hold large gatherings and ignoring all guidelines, I feel, is un-Christian."

To date, Ventura County has had more than 32,895 total coronavirus cases and at least 224 deaths, according to the LA Times' tracker. About 300 patients are currently hospitalized with COVID-19 in the county. Southern California, in which Venture County is located, currently has 0% ICU capacity.

Cameron, appearing on Fox News last week, said he had no plans to stop the events, adding, "there is immunity in community and desolation in isolation."

"Have you ever watched the eye-opening, heart-bursting movie, 'The Giver' with Jeff Bridges and Meryl Streep," he wrote. "Today's government leaders' 'safety rules' of 'no singing,' 'wear your mask at all times' and 'socially distance' seem like they're straight out of a scene from this scary movie about redefining life and reality for the 'safety of the community.'"

Some research has shown that singing is especially risky for spreading the novel coronavirus.

"If you're singing, you're breathing in a lot of air, you're breathing out very forcefully, and you're also moving your vocal cords. The vocal cords are wet, they're covered in this fluid, they're vibrating, and that can also produce more particles," University of Colorado-Boulder physics professor Jose-Luis Jimenez told the BBC in August.

The CDC says it strongly encourages wearing masks "in settings where individuals might raise their voice (e.g., shouting, chanting, singing)."

Cameron, who is probably best-known for his role on the '80s sitcom "Growing Pains" — and for being the subject of the "Kirk Cameron's sad birthday" meme — has spent the last several years carving out a career in evangelical media and running a ministry.