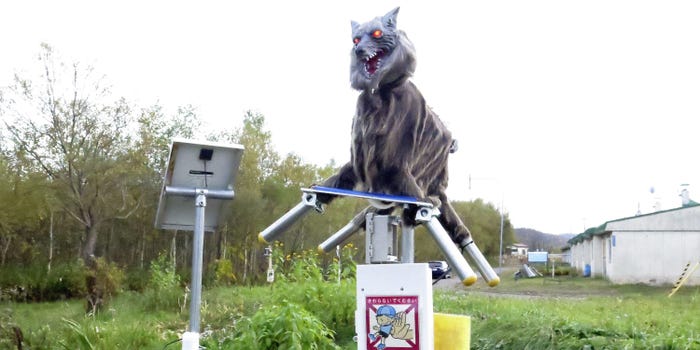 A small town in Japan has deployed red-eyed "Monster Wolf" robots to scare away wild bears roaming its streets.

The town of Takikawa, on the northern island of Hokkaido, purchased two wolf robots from maker Ohta Seiki after hungry bears started wandering around the town's neighborhoods in September.

The so-called "Monster Wolf" is propped up on a stand and has bared-teeth and glowing red eyes. It also has built-in motion detectors that, when activated, cause the robots to flash its eyes and emit wolfish-like howls.

The latest installments come as bear sightings in Japan reach a five-year high, with reports of more than a dozen attacks in 2020, two of which were fatal.

Japan has historically dealt with numerous bear attacks, its most infamous one being the Sankebetsu brown bear incident in Hokkaido between December 9 and 14, 1915.

The bear's brutal attack, which was reportedly 8-feet tall and weighed 837 pounds, left seven people dead and three others injured.

It is known as the worst bear attack in Japanese history and has led many people to refer to the animals as "man-eaters," according to the Daily Telegraph.

City officials believe the bears have become more active recently as they're looking for food before going into hibernation later this month.

However, this year's lack of acorns and nuts has prompted the bears to scavenge for food in towns instead.

City officials have said there had been no bear encounters since.