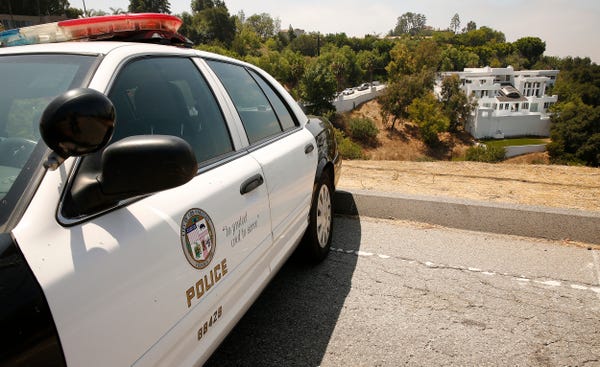 A reporter was arrested as she was covering a press conference near a hospital where two Los Angeles County sheriff's deputies were allegedly ambushed in Compton on Saturday.

Josie Huang, a reporter for the news website LAist and the pubic-radio station KPCC, was "tackled" by local authorities outside St. Francis Medical Center, KABC-TV reported.

Huang shared her experience online on Sunday and said she was detained and "charged with obstructing a peace officer because she was video-recording the police officers as they interacted with demonstrators gathered at the press conference in Lynwood.

"I saw a commotion ahead of me. Deputies rushed one man and chased another," Huang wrote. "I was filming an arrest when suddenly deputies shout 'back up.' Within seconds, I was getting shoved around. There was nowhere to back up."

Footage taken on Huang's cellphone shows glimpses of a scuffle between her and law enforcement. In the footage, a voice can be heard screaming, "I'm with KPCC."

Huang said she was in police custody for five hours. She described the incident as "being tossed around in the ocean and then slammed into rock."

"The female, who was later identified as a member of the press, did not identify herself as press and later admitted she did not have proper press credentials on her person," the department said.

"A tweet from the Sheriff's department at 2:19 a.m. Sunday includes a false claim that Huang did not identify herself as a journalist," LAist wrote. "Huang told deputies at least five separate times that she was a reporter and KPCC staffer in less than a minute, according to the recording."

NPR tweeted its support for Huang on Sunday.

"NPR is appalled by the arrest of Josie Huang, a KPCC public radio reporter, who was performing her job last night—gathering facts to inform the American public," the organization wrote. "The rights of journalists are protected by the First Amendment, and essential to an informed public and our Democracy."

An investigation into the incident is underway.