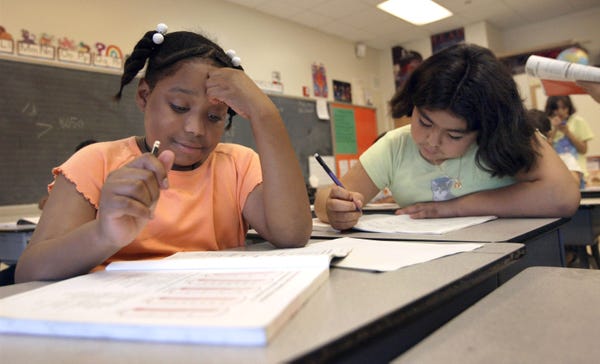 After resounding criticism from Texas Gov. Greg Abbott and a police group made up of 354,000 law enforcement officers nationwide, school officials retracted an assignment for eighth-graders that included cartoons comparing police officers to slave traders and members of the Ku Klux Klan.

The assignment asked students to evaluate the role of protests in a democratic society, as well as to think critically about the cartoons and the message one of them was sending, CNN reported. The assignment specifically referenced George Floyd, a Black man killed by police on Memorial Day in Minneapolis.

It was met with intense criticism on social media after Joe Gamaldi, the vice president of the National Fraternal Order of Police, tweeted out one of the cartoons included.

The cartoon Gamaldi shared depicts a series of five images, each with a white man pressing down on the neck of a Black man. The white man's status changes in each scene, and there are depictions of him as a slave trader, Ku Klux Klan member, and police officer. The Black man in each image appears to try and say he can't breathe.

In protest of the cartoon, the National Fraternal Order of Police, which bills itself as "the world's largest organization of sworn law enforcement officers," sent a letter to David Vinson, superintendent of the Wylie Independent School District, asking to withdraw the assignment and release a statement of apology. Vinson oversees the Texan school district that houses the school that sent out this assignment.

The backlash reached the office of the governor, who also denounced the assignment, as well as called for the teacher who assigned it to be fired. Abbott, the governor of Texas, also urged that an investigation be opened.

"A teacher in a Texas public school comparing police officers to the KKK is beyond unacceptable," Abbott tweeted. "It's the opposite of what must be taught."

In response to the criticism, the school district said in a statement to CNN that the cartoons "are not part of the district's curriculum resources or documents."

"We are sorry for any hurt that may have been caused through this lesson. The assignment has been removed, and students will not be expected to complete it," the statement continued. "We don't condone the use of these divisive images and are addressing the issue to prevent this from happening again."