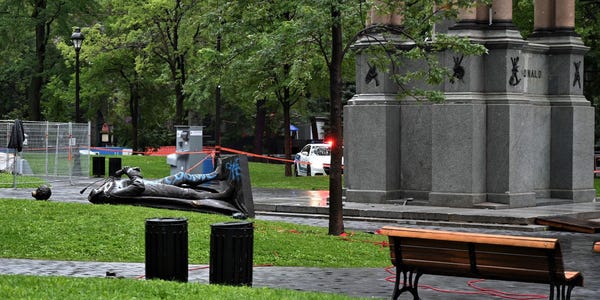 Protesters pulled down a statue of Canada's first prime minister on Saturday.

A widely circulated video shows the toppling of a landmark statue of John A. McDonald, in which the figure's head breaks off and bounces on the paving stones.

The otherwise peaceful protest gathered under the banner of a group named The Coalition for BIPOC Liberation. BIPOC stands for "Black, Indigenous and people of color." Insider has contacted the group for comment but did not immediately receive a reply.

The statue's removal came at the culmination of a 200-strong protest that started as a call for changes to the city's police funding, according to local newspaper the Montreal Gazette.

Police accompanied the protesters but did not intervene at the statue's removal, according to the Montreal Gazette.

A statement on the group's Facebook page calls for the removal of all "statues, plaques and emblems" connected to those who have promoted racism.

"Symbols of hate encourage the mental oppression of marginalized people and serve as reminders to all people of the inequitable imbalance of power and encourage white supremacist attitudes," read the statement.

John A. McDonald was among Canada's founding fathers and the country's first prime minister, holding the office in the late 19th century.

Although he is seen as a key figure in the formation of the modern Canadian nation, he also enacted cruel policies towards Indigenous people.

He is accused of capitalizing on a famine to drive Indigenous people into reservations, and founded the Indian Residential Schools system, an assimilation project that forcibly removed children from their parents.

A 2015 reconciliation commission called the school "cultural genocide" and noted that abuse at the schools was widespread, according to The Guardian. The Canadian government eventually issued a formal apology for the school system in 2008, calling it a "tragic legacy."

The statue of McDonald had been the topic of debate for some weeks, with a petition signed by around 9,000 people addressed to Montreal Mayor Valérie Plante in June, according to Canadian TV channel Global News.

On receiving the petition, Plante said she was "not closed" to the idea of taking down the statue, but said, "it's important to remember the past from an educational perspective." The possibility of placing contextual materials around the statue has been discussed.

A leaflet circulated by the protesters on Saturday described McDonald as a "white supremacist" and denounced the "inaction" of Plante, according to the BBC.

Plante tweeted on Saturday: "I strongly condemn the acts of vandalism that took place this afternoon in downtown Montréal, which led to the John A. Macdonald statue being torn down."

Quebec Premier Francois Legault also disapproved, tweeting: "We must fight racism, but destroying parts of our history is not the solution. Vandalism has no place in our democracy and the statue must be restored."