On June 21 Janis Taylor was out with her two sons Jackson, 11, and Maxwell Lamb, nine, in the Tunstall Bank area of Rhyhope, Sunderland when the dog bounded up to her and sank its teeth into her arm.

The 39-year-old, fearing for her life, told her two sons to run. 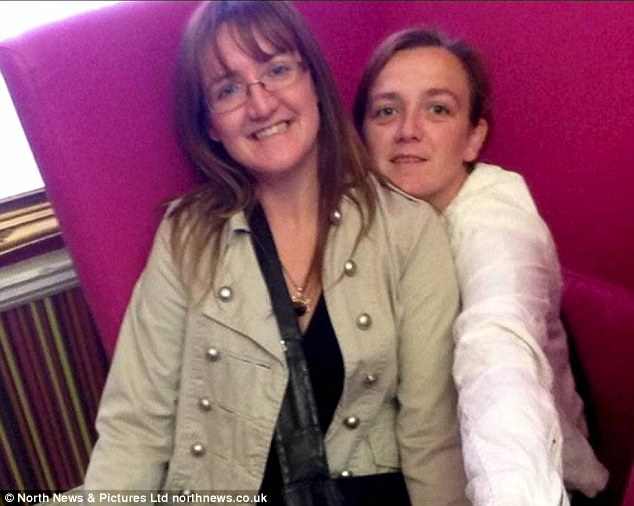 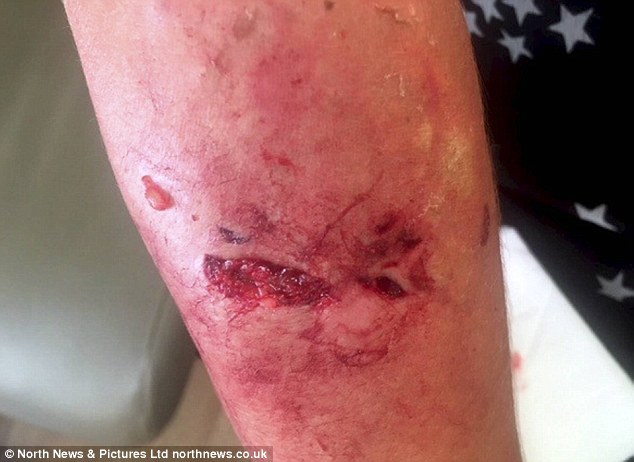 The 39-year-old mother was with her two sons when the dog attacked her. She said the dog jumped on her face and when she tried to get her son out of the way it bit her arm

Ms Taylor said:  ‘We were out walking with our American bulldog Bullseye when we saw this dog.

‘It was coming towards us, so I told my eldest lad to take Bullseye back.

‘It raced over and jumped up at my face so I threw my arm out to get my son out of the way.

‘The boys ran off and that’s when the dog chomped on to my arm.

‘My kids said that the dog was shaking me but I can’t remember. They were hysterical.

‘I just want to warn people that this dog is out there somewhere.’

She was taken to Sunderland Hospital for treatment where she needed four stitches, two butterfly clips and antibiotics.

On her way there her sister called her to say she had been attacked by the same dog.

Lynne Moore said she was injured close by, claiming it was the same dog who attacked her while she was out with her two children Leland, nine, and Darcy, six. 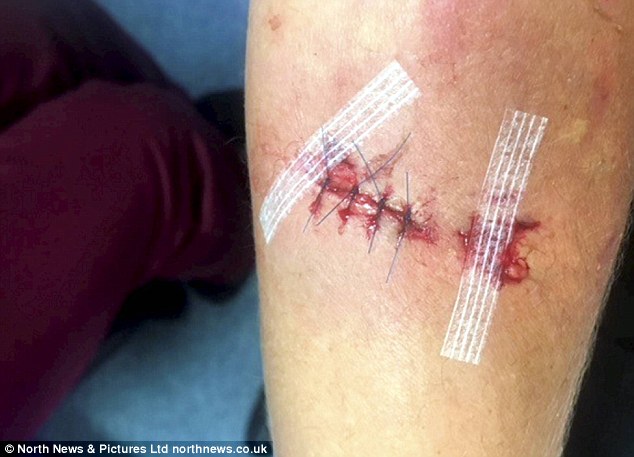 Ms Taylor was taken to hospital where she recieved four stitches, two butterfly clips and antibiotics 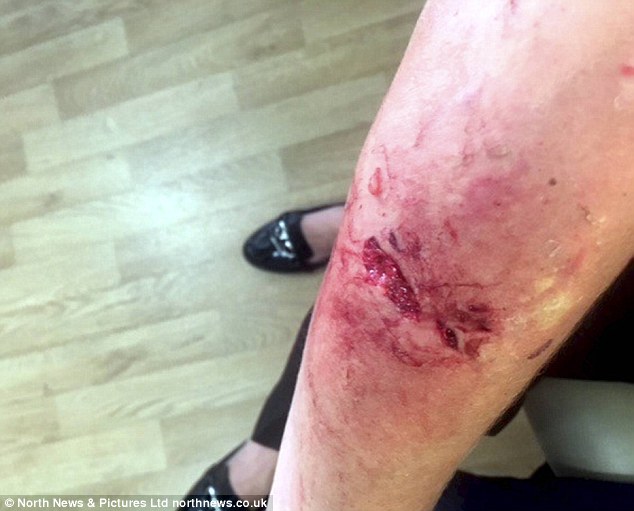 The 35-year-old explained she was walking down a pathway behind houses with her two kids.

Ms Moore said: ‘As the dog came towards us I said to my children “move to one side so the dog can go past us”.

‘Then it went for my little girl who is just six. I picked her up, put her on my hip and spun my back around so my back was facing the dog.

‘The next thing I know it was on the back of my arm and I went into shock.

‘It took the dog a good two or three minutes to leave go of my arm.’

The family then walked back the way they came.

The mother-of-two said she was in shock when she found out her sister had been attacked by what is believed to be the same dog. 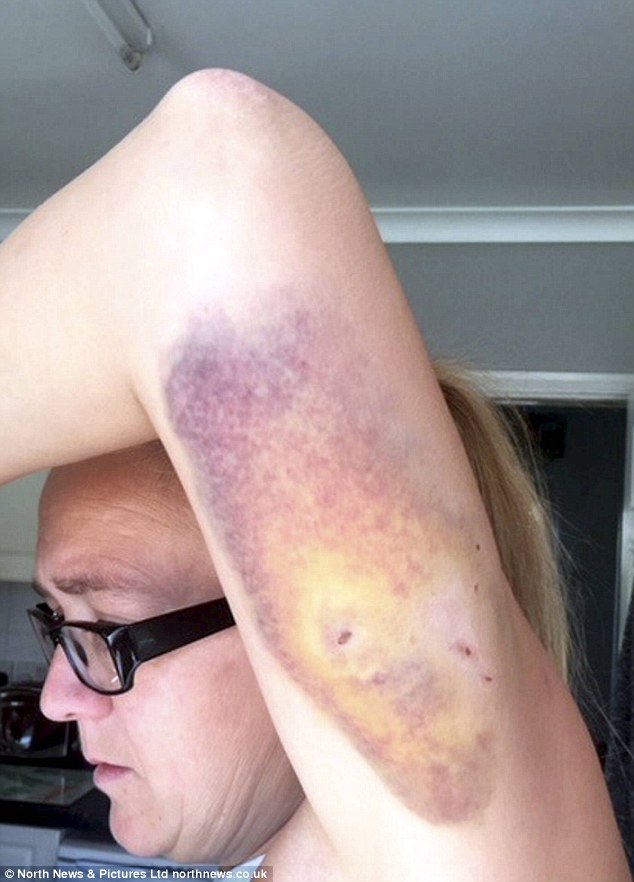 She said: ‘I thought how could this happen to us separately.

‘Nine times out of ten we are always together and this afternoon, when we haven’t been together, we have both been attacked.

The painful injury on the back of her arm has forced Ms Moore to take time off work.

She said she had been unable to drive shortly after the incident.

She’s also said that her daughter is now afraid of dogs. 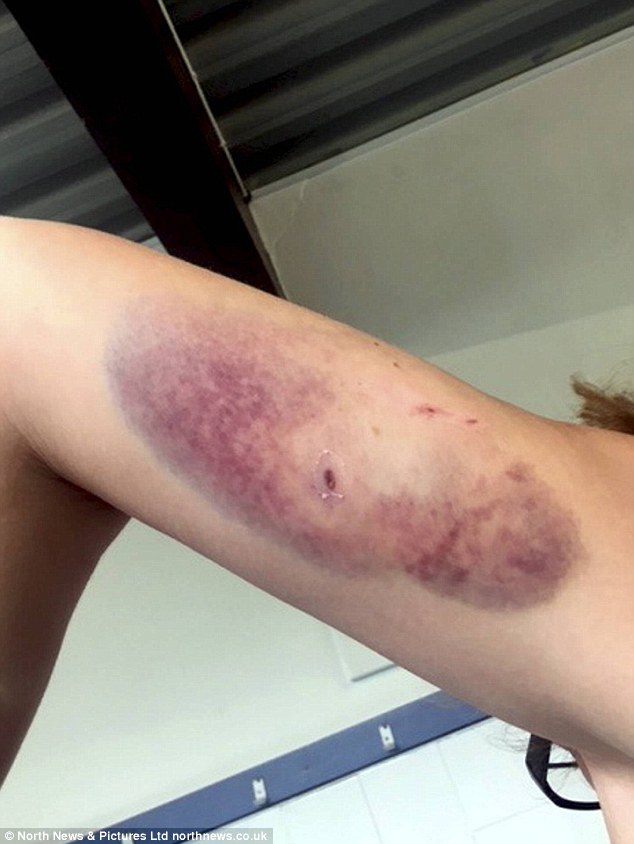 Ms Moore said: ‘I just want the owner to own up and say “yes my dog did escape”.

‘It could be a child next time!’

Numbria Police have confirmed that they are investigating the attacks but have been ‘unsuccessful’ in tracking down the person they believe is the dog’s owner.

A spokesperson said: ‘We would encourage anyone who has more information about this incident, or the owner of the dog responsible, to come forward and contact police on 101 quoting crime number 081772P/18.’