This is the adorable moment a stubby alligator was given a second lease of life in Phoenix, Arizona.

Thanks to a 3D printed prosthetic tail, the alligator can go swimming among his kind once again.

Affectionately named him ‘Mr Stubbs’, the gator has since been swimming with its new clip-on tail.

When 32 alligators were rescued from an illegal smuggling attempt across the Arizona border in 2005, one small male gator ‘stood out from the rest’.

This was because of one unusual physical characteristic where he had no tail.

Vets believe he lost it in a fight with another gator and just like humans losing a limb, the injury affected his ability to do everyday things.

Believing to have been lost somewhere during transit, the afflicted alligator was thrust into the care of the Phoenix Herpetological Society. The alligator, named affectionately as Mr Stubbs, for its missing tail which meant it was unable to swim or even walk properly

However, not being able to swim at all or even walk properly, Mr Stubbs was unable to live alongside his reptilian peers.

After creating molds to fit the tail to Mr Stubbs, a 3D printer was used to create the rest.

Now the gator can swim around and live like any other alligator. 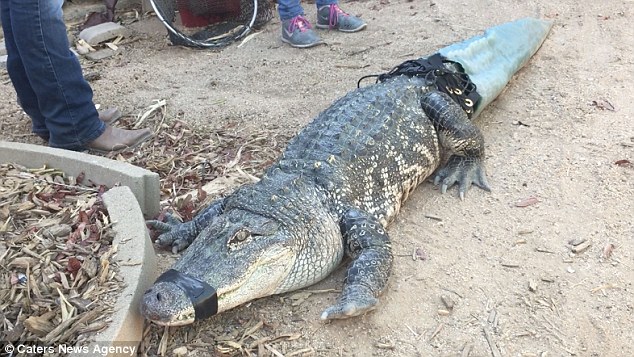