Christchurch: Forty years after the tragedy, New Zealand Prime Minister Jacinda Ardern has given a "wholehearted and wide-reaching" apology to the families of those killed in the Mount Erebus disaster.

On November 28, 1979, Air New Zealand flight 901 crashed into the side of the Antarctic mountain, killing all 257 on board, including 200 Kiwis and one Australian. 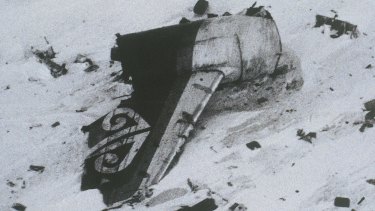 The tail section of an Air New Zealand DC10 plane is seen after it crashed into Mount Erebus in Antarctica in 1979.Credit:AP

The anniversary of the worst aviation incident in the country's history – and greatest peacetime loss of life – has drawn much attention in New Zealand.

There have been calls for a memorial and the re-airing of grievances thrown up by two official and conflicting reports conducted in the aftermath of the crash. 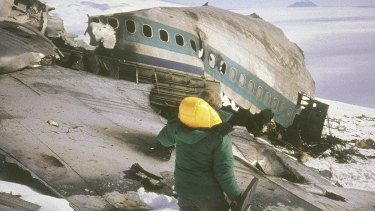 A rescue worker walks past the wreckage of an Air New Zealand DC10 plane.Credit:AP

Previous governments failed to table those inquiries in Parliament until 20 years after the crash.

On Thursday, Ardern gathered with victims' families at Government House in Auckland to deliver the apology, saying the government's botched response "was wrong. It caused trauma on top of grief. And persecution on top of pain".

"I have read many accounts from family members. Letters telling stories of that day, of the weeks that followed, of the trauma that arises any time that Erebus is mentioned," she said.

"All I know is that after 40 years, setting down grief will only be made harder, if we don't acknowledge past wrongs.

"After 40 years, on behalf of today's government, the time has come to apologise for the actions of an airline then in full state ownership; which ultimately caused the loss of the aircraft and the loss of those you loved.

"This apology is wholehearted and wide-reaching. We will never know your grief but I know the time has come to say I am sorry."

At the same time as the memorial service in Auckland, staff based at New Zealand's Scott Base in Antarctica also read a message from Ardern and held a moment's silence.