This is the moment a ‘heroic’ staff member used a stool to chase off a gun-wielding thug who tried to steal from him.

Tyrone Roach, 29, now faces a lengthy prison sentence after being convicted of attempted armed robbery at a Newcastle court.

CCTV footage taken from last summer shows the moment a masked Roach bursts through the front door of the Gulf petrol station in Chapel House, Newcastle and storms towards the counter. 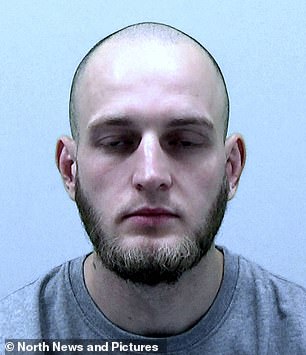 Armed robber Tyrone Roach, 29, faces a lengthy prison sentence after he was convicted of attempted robbery at Newcastle Crown Court

He proceeds to pull a gun from his pocket and aims it through the safety glass at a male member of staff.

But, to his surprise, the brave employee responds by picking up a blue stool and charging at the gunman, who flees the scene on foot.

The footage switches to a camera showing the petrol station’s exterior, with Roach having made off after the stool-wielding employee stood his ground.

Detectives working on the case heaped praise on the brave employee and described his actions as ‘heroic’.

The 20-second video of Roach bursting into the Gulf petrol station in Hillhead Parkway was released by Northumbria Police after the case concluded. 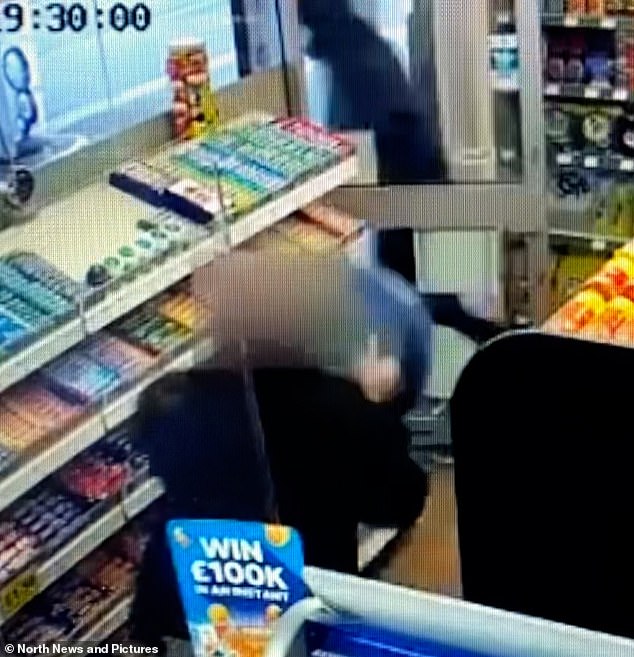 Newcastle Crown Court was told how Roach had charged into the Chapel House Petrol Station store on July 17 last year.

Police identified and later arrested the suspect using CCTV evidence and DNA found on a discarded face mask close to the scene.

Roach, of Deighton Walk, East Denton, was convicted by a jury at Newcastle Crown Court on Friday, May 21. 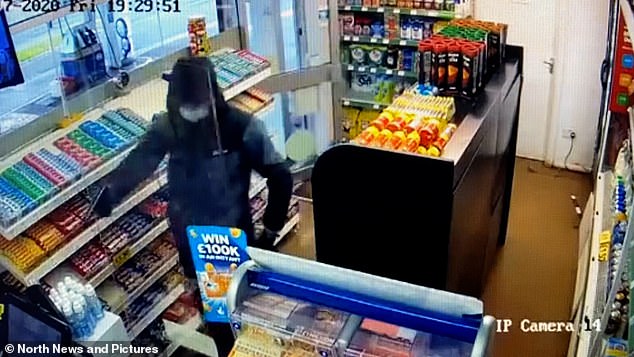 In the 20-second clip, a masked Roach clad in a dark coloured hoodie points his weapon, believed to be a gun, at the shopkeeper and gestures towards the till 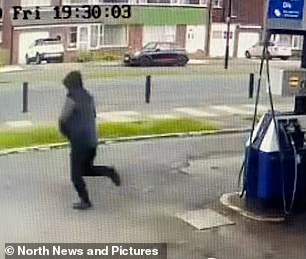 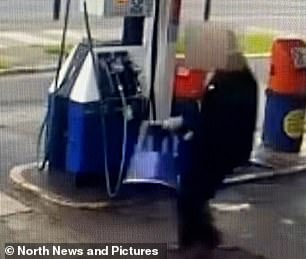 But, Roach is forced to flee the scene in fear after being chased by a ‘brave’ and ‘heroic’ employee who used a blue stool to defend himself

Detective Sergeant Mark Atherton, of Northumbria Police, said: ‘This would have been a terrifying confrontation for the staff member at this petrol station and his response was heroic.

‘While we would never encourage anyone to fight back against an armed criminal we do think it is right to recognise this victim’s bravery.

‘He refused to hand over money and instead stood up to the thief who was so shocked that he immediately turned and fled the scene.’

Roach will face sentencing at Newcastle Crown Court on June 6.