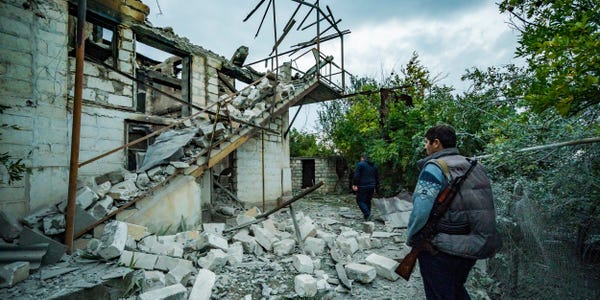 Leaders of Armenia and Azerbaijan have agreed to a US-brokered ceasefire that will begin on Monday.

In an Oct. 25 statement released by the US State Department, foreign ministers for both nations said they agreed to a "humanitarian ceasefire" that will take effect at 8:00 am local time. The statement said that the US had "facilitated intensive negotiations" to resolve the conflict over Nagorno-Karabakh, an autonomous enclave that is internationally recognized as part of Azerbaijan but which contains a majority population of Armenian descent.

Fighting began September 27, when the Azerbaijani military launched strikes against Nagorno-Karabakh, with Armenian forces launch an offensive in return.

Both sides have been credibly accused of war crimes, with Amnesty International saying it is "gravely concerned by the ongoing use of heavy weaponry by both parties in areas populated by civilians." Azerbaijan, backed by Turkey, has dropped "inherently indiscriminate" cluster bombs on Stepanakert, the capital of Nagorno-Karabakh, according to the group, while Armenia has shelled homes in Ganja, Azerbaijan's second largest city, killing numerous civilians.

At least 1,000 people have been killed since fighting began, with Russian President Vladimir Putin claiming the real toll could be as high as 5,000. Russia, which has a defense pact with Armenia, has supplied both nations with arms.

Have a news tip? Email this reporter: [email protected]