Phnom Penh: Australian filmmaker James Ricketson has been found guilty of espionage in Cambodia and sentenced to six years in prison.

The 69-year-old has spent the past 14 months incarcerated in the city’s overcrowded Prey Sar prison after he was arrested for flying a drone above an opposition party rally in June 2017. 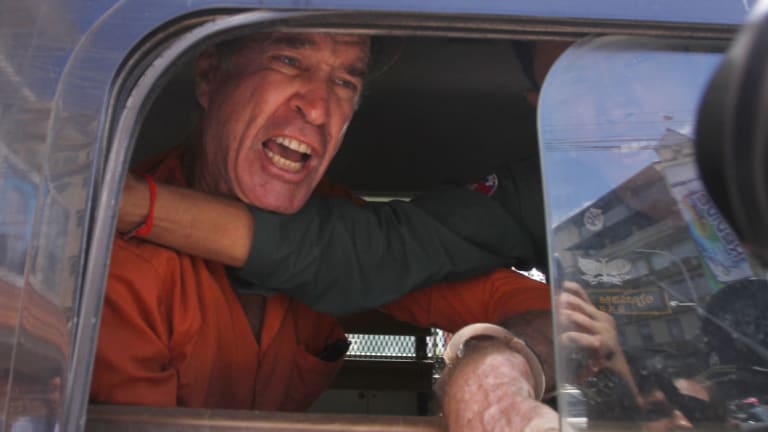 Australian filmmaker James Ricketson speaks from a prison truck during a lunch break at Phnom Penh Municipal Court on Friday.

He was accused of gathering information that could jeopardise Cambodia’s national defence, but the lengthy trial focused more on his criticism of strongman Prime Minister Hun Sen than alleged covert activities for a foreign power.

Ricketson raised his arms and implored the judges: “Please, tell me, which county was I spying for?”

Ricketson then turned to the gallery and said the decision was “unbelievable”. His son, Jesse Ricketson, assured him, “It’s not over”.

“It’s the end of the beginning, believe me,” the elder Ricketson said.

The offences were committed between December 2010 and June 2017, the judges said, not from 1995 as initially alleged. The charge carried a maximum sentence of 10 years.

Prosecutor Sieng Sok said he “agreed with the decision of the court,” but defence lawyer Kong Sam Onn said the evidence was insufficient to convict his client.

“After seven days of hearings we have seen so little evidence to put the burden on James in accusing him of being a secret agent, a spy that affects the national defence, or accusing him of espionage or anything against the government,” Sam Onn said.

He said Ricketson could appeal the decision or ask for a royal pardon, and he would meet with his client to discuss further legal steps. He added he would write to the Australian Embassy asking them to support any pardon request.

The decision left Ricketson’s family members in Phnom Penh and in Australia devastated.

“We’re not giving up,” said son Jesse outside the courthouse.

“This result will send shockwaves out through all of our family and community and James’ supporters … It’s been a really long hard road to this point, and now to get his result is just heartbreaking. I feel so much for my father right now.”

“Justice was not served today,” she said. “For a 69 year old man like my dad, who is in poor health, this is effectively a death sentence.”

A statement from the family said the toll of this result had been immense and it continues to to be a “truly brutal experience.”

“We are in utter shock at this outcome and that James, an innocent Australian, has been sentenced so harshly. Our family lives this tragedy daily … Now, more than ever we desperately need the help of the Australian government to strongly advocate on behalf of one of its citizens.”

The unprecedented and uncharacteristically lengthy trial drew to a close on Wednesday with Prosecutor Sieng Sok recommending Ricketson be convicted, alleging his filmmaking and humanitarian work were a cover for espionage activities between 1995 and 2017. 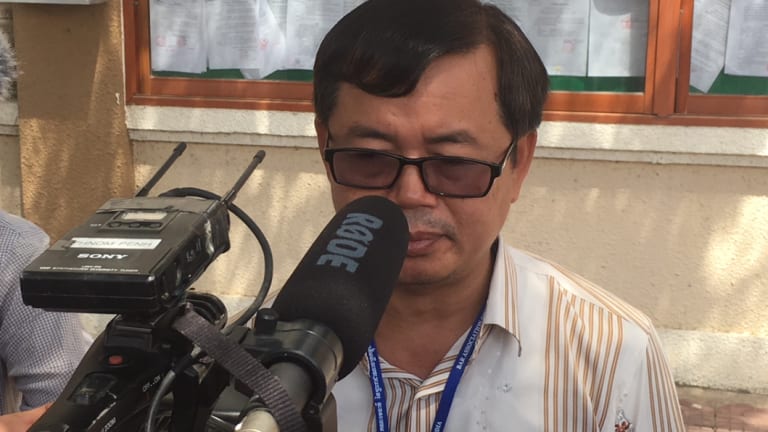 The prosecution gave just three items of evidence to back up the espionage charge – a letter to former prime minister Malcolm Turnbull, an email to former Cambodian opposition leader Sam Rainsy and a dozen photographs of riot police at a protest in Freedom Park.

Rainsy slammed the result: "The decision is revolting and reached in the absence of any evidence to support the charge. Cambodia's legal system has acted at the behest of the executive and remains far removed from international norms,” he said.

“This witch trial must trigger an international response. Why does the Australian government allow such an injustice to be perpetrated against one of its citizens?”

Phil Robertson, of Human Rights Watch, said the guilty verdict was “predetermined” and the charge was “ridiculous”.

“When it comes to a conviction in a Cambodian court, clearly no facts are required,” he said. “Cambodia should stop tormenting Ricketson and his family, release him immediately and unconditionally, and quash this conviction.” 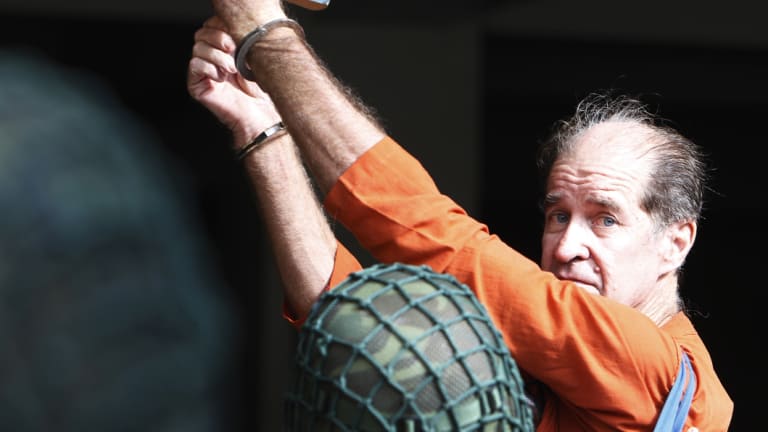 Ricketson has repeatedly asked which country he allegedly spied for – a question that was not answered over seven days of hearings in the Cambodian court.

After his defence team screened clips of Ricketson’s feature films and documentaries in an effort to prove he was not a spy, the trial judges brought up new emails as evidence, and peppered Ricketson with politically-tinged questions about his criticism of Hun Sen and the ruling Cambodian People’s Party (CPP).

The CPP swept to victory at the national election last month, claiming all 125 parliamentary seats less than a year after the Supreme Court – headed by a card-carrying CPP member – forcibly dissolved the opposition Cambodia National Rescue Party (CNRP) and banned its senior leaders from politics for five years.

The CNRP’s president, Kem Sokha, was also arrested in a midnight swoop almost a year ago and accused of treason over a speech he made in Australia in 2013, in which he described political advice he received from the US about regime change.

Cambodian authorities alleged the speech was evidence of plans to foment a “colour revolution” and a plot to “topple” Hun Sen’s government – part of the conspiracy rhetoric that came to dominate Cambodian discourse in the lead up to the election.

Ricketson’s support for the CNRP and his apparent closeness to Sokha’s predecessor, Rainsy – including asking Rainsy’s wife to fact-check an opinion piece, offering media advice, and sending clips of footage from rallies and protests – was also interrogated by the judges.

Of particular interest was a private email to a family member, in which Ricketson wrote: “It is fascinating to be behind the scenes and to be observing the way in which Rainsy is plotting to become Prime Minister,” and that Rainsy planned to pull off “a bloodless coup”.

Rainsy said Ricketson was an independent filmmaker and journalist who had never worked for him.

“I deny all their accusations which are not only groundless but silly,” he said.

“These are pure inventions intended to harm an innocent person who has the right not to like Hun Sen's authoritarian style of government.”

“The lack of independence of the Cambodian judiciary is clearly shown in this case, as in many others.”

Ricketson gave some combative answers to questions from the judges, who asked him why he wrote “bad things” about Hun Sen and the CPP and why he did not focus on the good developments in Cambodia.

Ricketson said he didn’t see how criticism and opinion equated to espionage, before taking on a contrite tone on his final day in court, repeating his apology to Hun Sen for the “too strong words” he used in a letter to Turnbull suggesting he cancel Hun Sen’s visit to Australia.

Ricketson has proved a divisive figure and admitted he had enemies in the NGO sector. He has previously been accused and convicted of defamation in a Cambodian court – a case said he was unaware of until after the verdict – and has been criticised for staunchly defending convicted paedophile David Fletcher.

He has had a public spat with Screen Australia and once took to Facebook to describe Hun Sen as the “Darth Vader of Cambodian politics”.

But his adopted Australian daughter Roxanne Holmes has described her father as her “hero”. His Cambodian adopted daughter, Chap Chanti, and her family described James as a true humanitarian who had supported them and other impoverished Cambodians for some 20 years.

His adopted son-in-law Phun Chork gave a moving testimony that brought both him and Ricketson to tears in the courtroom.