Mystery Australian soldier who shot dead a terrified, unarmed Afghan man in what was labelled a ‘straight up execution’ is IDENTIFIED eight years later and stood down from duty

A soldier who was filmed shooting dead a seemingly unarmed and ‘docile’ Afghan man has been identified and stood down pending further investigation.

The disturbing footage, which aired on ABC’s Four Corners on Monday night, showed the Australian soldier open fire on the man as he cowered in a field at the village of Deh Jawz-e Hasanza in Afghanistan.

An internal investigation into the soldier’s actions in 2012 cleared him of any wrongdoing, but the Defence Minister this week referred the matter to the Australian Federal Police Commissioner.

The soldier, known as Soldier C, has since been identified and suspended from duty for the duration of the investigation.

A statement from the Department of Defence described the footage, in which the soldier appears to shoot the man in point blank range, as ‘serious and disturbing’.

Defence Minister Linda Reynolds said she made a ‘formal referral to the Commissioner of the Australian Federal Police regarding the incident involving the alleged serious criminal conduct of so-called Soldier C’.

The confronting vision shows a group of soldiers following a German Shepherd named Quake as he guided them to the man, who was hiding in a wheat field.

Once the man was identified, the soldier in question pointed his M4 assault rifle at his head, from about two metres away.

‘You want me to drop this c**t?’ the soldier yelled at the dog handler.

The Afghan man cowered down holding what appeared to be red prayer beads.

‘I don’t know mate. Hit *** up,’ the handler replied, referring to the patrol commander nearby.

The soldier then directed his question at the commander.

He asked twice but the commander’s response isn’t distinguishable in the video.

The soldier then shot the man three times in the head and chest.

An ADF investigation ruled the shooting was self defence, but Braden Chapman, a former member of the same squadron, was shocked when he saw the footage.

‘He’s asked someone of a superior rank what he should do, but it comes down to the soldier pulling the trigger. It’s a straight-up execution.’ 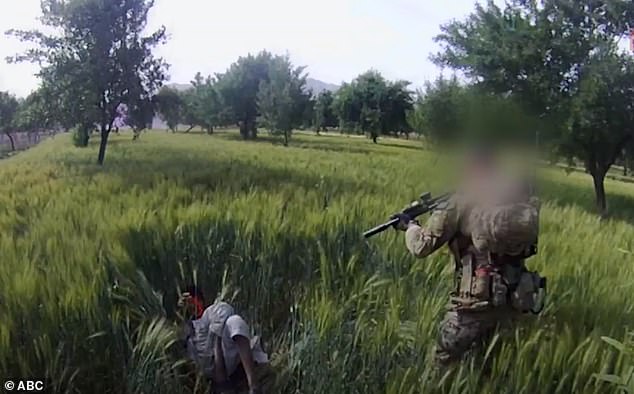 ‘You want me to drop this c**t?’ the soldier (pictured right) yelled at the dog handler

The SAS soldier seen in the footage claimed he opened fire in self defence, arguing the Afghan man had a radio which wasn’t visible in the footage and could have posed a threat.

He also told the ADF he pulled the trigger from 15 to 20 metres away.

Senator Reynolds said she was ‘deeply disturbed’ by the footage.

She said she steadfastly supported an inquiry by the Inspector-General of the Australian Defence Force into allegations against special forces in Afghanistan from 2005 to 2016.

The military watchdog is investigating 55 separate allegations of unlawful conduct in Afghanistan by Australian soldiers.

‘Where serious allegations are raised, Australians would rightly expect they are thoroughly examined,’ she said.

‘The Chief of the Defence Force has advised me that the IGADF will soon provide a report on the findings of the Afghanistan Inquiry.’