A bear cub is recovering after receiving fish skin bandages to her paws, which were burned in the California wildfires.

A contractor found the yearling black bear female alone on August 2 near Whiskeytown, California, lying in ash and unable to walk on her raw, burned paws.

The area falls within the path of the Carr Fire which has burned tens of thousands of acres since it ignited in July.

The contractor notified California Fish and Wildlife, which tranquilized the bear and took it to the department’s lab in Rancho Cordova, California, for treatment. 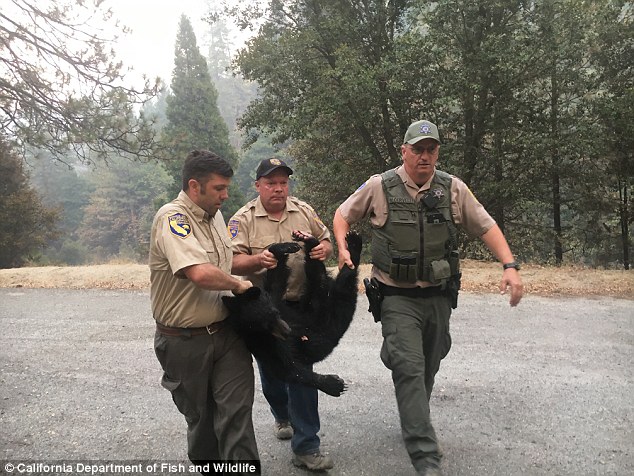 A yearling black bear cub was found all alone, lying in ash and unable to walk due to burns on all of her paws. She was found in an area where wildfires have been active 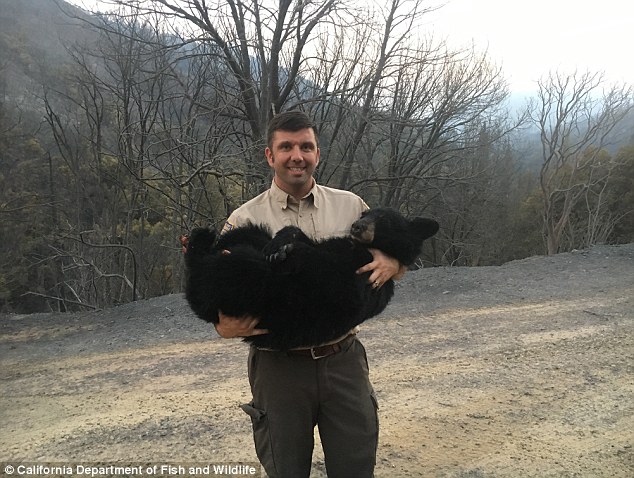 After the cub’s burned paws were cleaned, sterilized tilapia skin was used as a ‘biological bandage’ and sewn to the healthy areas of the paws to help reduce healing time

‘Generally speaking, an animal that has survived a fire and is walking around on its own should be left alone, but that wasn’t the case here,’ California Department of Fish and Wildlife environmental program manager Jeff Stoddard told ABC News.

Besides the fact that she couldn’t stand or walk, Stoddard said that active and growing fires and the lack of a suitable nearby habitat to re-home the cub  in contributed to the decision to move her to the lab.

An examination by a vet Monday revealed that the cub had third-degree burns on all four of her paws.

University of California, Davis Veterinary Medical Teaching Hospital’s Dr. Jamie Peyton then decided to treat the bear with an experimental procedure involving the use of sterilized tilapia skins — a treatment that had previously worked successfully on two adult black bears and a mountain lion cub also burned during wildfires. 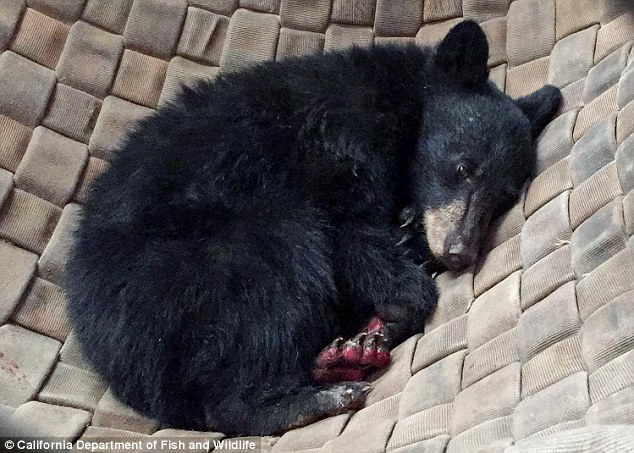 The bear was examined by a vet on Monday, who determined she had third-degree burns 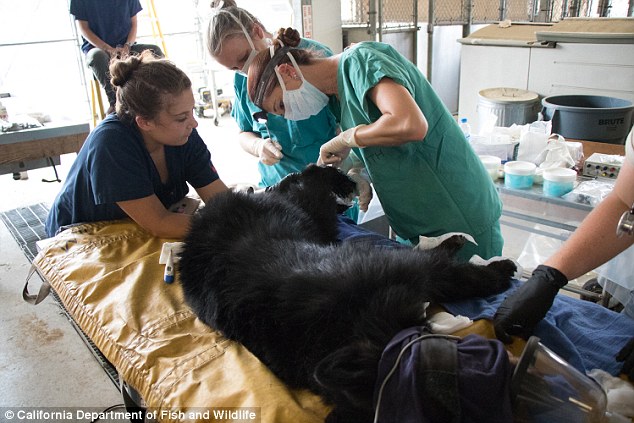 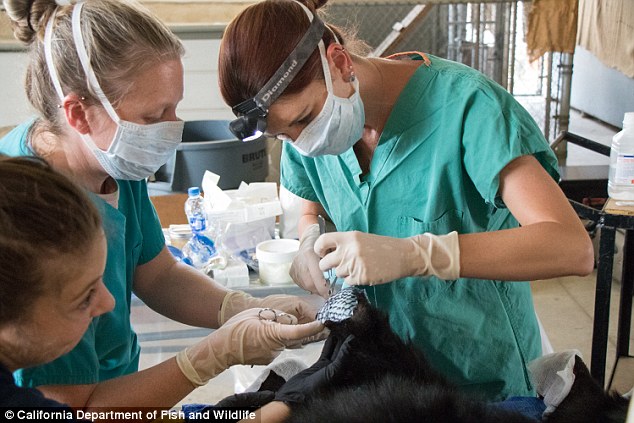 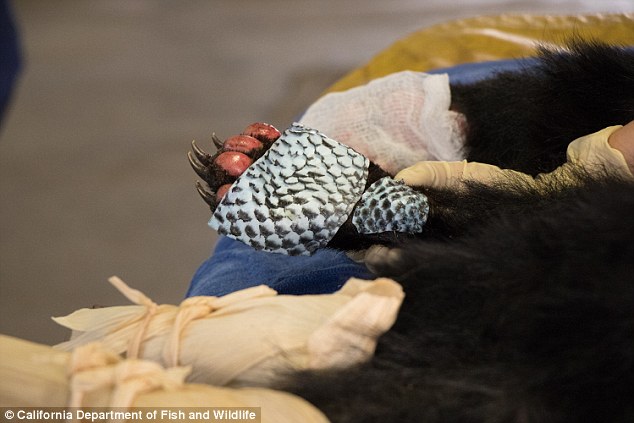 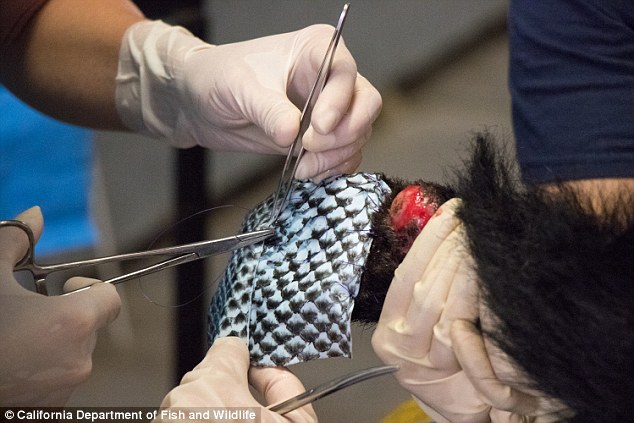 After her paws were cleaned, the  fish skin was sewn onto the healthy tissue of the bear’s paw 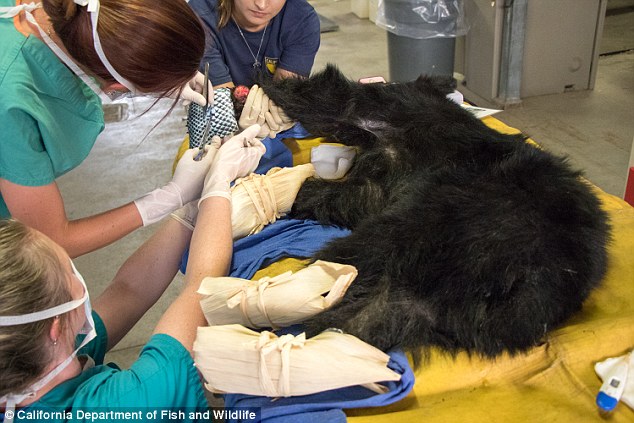 Veterinarians were concerned that the cub might wreck the fish skin bandages after they were put on, but so far the bear has left them alone After the cub’s paws were cleaned, the sterilized fish skins were sewn onto the healthy tissue around the burns.

In addition, the skins are said to provide direct and steady pressure to the wounds, while also doing a better job of keeping bacteria out than traditional bandages would, the Department of Fish and Wildlife said according to SF Gate.

Peyton said she was concerned that the cub would wreck the ‘biological bandage’ fish skin because she was licking her paws so much. But, after the procedure, the cub seemed to have stopped licking her paws, a sign that she isn’t in as much pain, since animals tend to lick at painful wounds.

Considering her youth and general health, officials are optimistic the cub will make a full recovery.

Several areas in California are struggling to control and contain wildfires. Firefighters are said to be battling 17 wildfires.

The 279-square-mile Carr Fire has already killed two firefighters, a utility worker and three members of one family. It has destroyed nearly 1,100 homes.

The largest fire is said to be in Mendocino County and has since become the largest wildfire in California’s recorded history, according to CNBC. It has destroyed more than 300,000 acres.

The most destructive wildfires this summer began burning in late June.