Supermassive black holes emit ‘burps’ when they’re eating the gas and stars around them and this flicker is directly correlated to their size, study finds

Researchers at the University of Illinois Urbana-Champaign have discovered that black holes emit flickers of light – akin to a ‘burp’- when they’re consuming gas and stars around them and this change in brightness is directly correlated to their size.

Supermassive black holes (SMBHs), which are millions to billions times more massive than the sun, usually reside at the center of galaxies, including one at the center of the Milky Way, known as Sagittarius A*.

When dormant, SMBHs often don’t give off much light. However, when they are active, usually at the dawn of the universe consuming all known matter, the radiation they give off occasionally outshines the galaxies they reside in, with the flickering light ranging from hours to decades of observations. 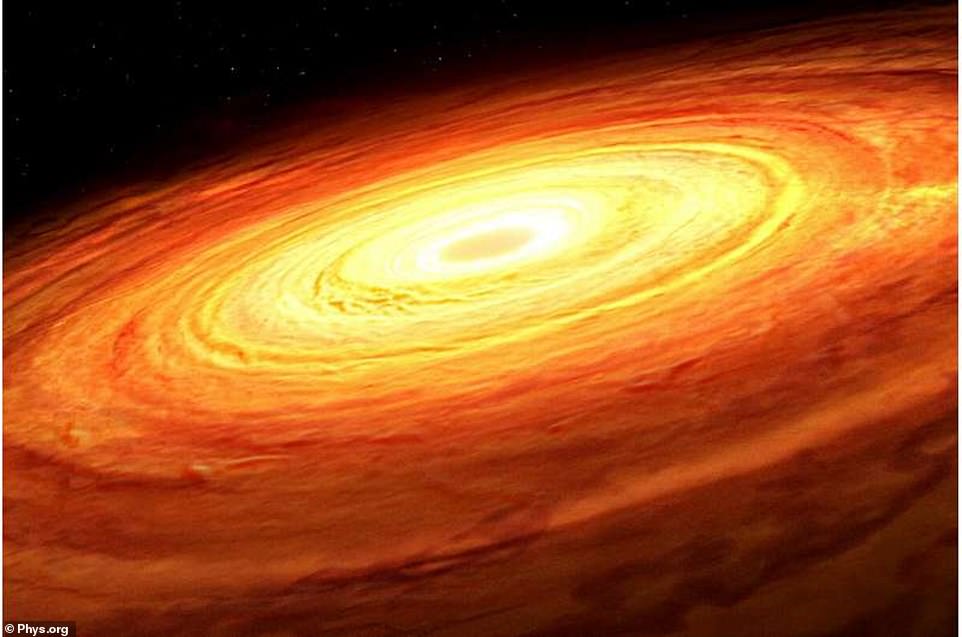 Supermassive black holes emit flickers of light when consuming matter, with the change in brightness directly correlated to size. When SMBHs are active, the radiation they give off occasionally outshines the galaxies they reside in, with the flickering light ranging from hours to decades

SUPERMASSIVE BLACK HOLES ARE AT THE HEART OF GALAXIES

‘There have been many studies that explored possible relations of the observed flickering and the mass of the SMBHs, but the results have been inconclusive and sometimes controversial,’ said the study’s lead author, Colin Burke, in a statement.

A supermassive black hole swallows a large amount of matter. As that matter begins to move at high speed due to the black hole’s gravity it emits intense energy, which can push the surrounding matter outward. This is how the galactic wind is created.

It’s still unclear why the flickering happens due to ‘physical processes that are not yet understood,’ however.

The researchers looked at a number of characteristics, including timescale, to allow them to see how the pattern changes and see if it correlates with the SMBH’s mass.

They also looked at the results of accreting white dwarfs, remnants of stars similar to the sun and found that there is a timescale-mass correlation holds, despite the fact white dwarfs are significantly smaller than black holes.

‘These results suggest that the processes driving the flickering during accretion are universal, whether the central object is a supermassive black hole or a much more lightweight white dwarf,’ the study’s co-author, University of Illinois Urbana-Champaign Yue Shen added.

‘The firm establishment of a connection between the observed light flicker and fundamental properties of the accretor will certainly help us better understand accretion processes,’ study co-author Yan-Fei Jiang added. 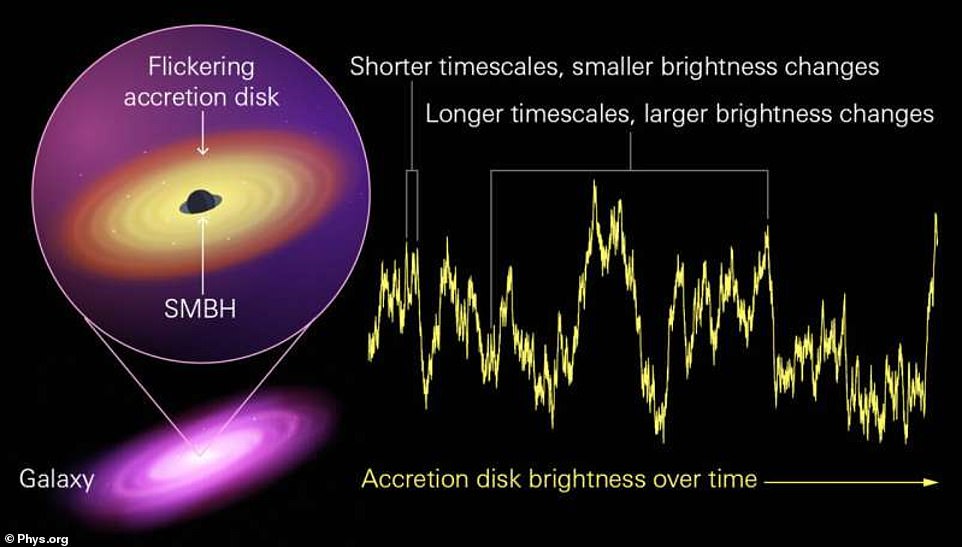 Not only could these flickers of light help determine the size of SMBHs and white dwarfs, but they may also help researchers uncover intermediate-mass black holes (IMBHs), which are between 100 and 100,000 times the mass of the sun, of which only one has been found.

‘Now that there is a correlation between the flickering pattern and the mass of the central accreting object, we can use it to predict what the flickering signal from an IMBH might look like,’ Burke added.

The study was published Thursday in the journal Science.

Black holes and their existence have continued to fascinate researchers in recent memory.

The first image of a black hole’s event horizon – the ring of light around the perimeter- was unveiled in April 2019, after scientists spent years probing Sagittarius A*.

In September 2020, scientists said the M87* black hole appeared to be wobbling while it rotated, the result of turbulence.

Last month, Stephen Hawking’s theory that black holes’ event horizons will never shrink was proven right by a group of researchers at MIT.

Separately, Einstein’s theory of general relativity was proven after scientists spotted light coming from behind a black hole for the first time.