Washington: A 72-year-old voter in Dayton, Ohio, said, "I'm angry about everything." A retired veterinary technician in Detroit said she voted for one reason only: "Donald Trump. To make sure he's not reelected." A federal employee who waited in line for 10 hours in suburban Atlanta explained simply: "I have three black sons."

A few weeks before the US presidential elections, black Americans have voted in striking numbers, helping to drive historic levels of early voting. Mail ballots have flooded election offices and people have endured huge lines to cast ballots in person across the country. 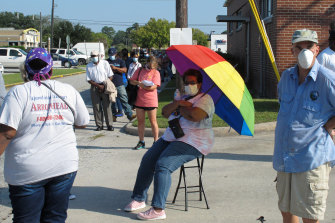 Crystal Clark sits on a folding stool while holding an umbrella for shade as she waits in line to vote early in Savannah, Georgia.Credit:AP

In interviews in 10 states where early voting is underway, black voters said this year's election is the most important of their lifetime – some calling it more consequential even than in 2008, when those who were old enough went to the polls in record numbers to make Barack Obama the country's first black president.

They spoke of a sense of urgency to protect the nation's democracy, and their role in it, which they believe a second Trump term would erode beyond repair. Many said they view the President as a racist who cannot bring himself to disavow white supremacists or the year's spate of police killings of unarmed black Americans, and they believe the country is less safe for themselves and their families.

Over and over again, black Americans described their vote this year as much more than a choice between two presidential candidates; an urgent stand in the long fight against racial injustice in America.

"We shouldn't be where we're at in 2020," said Tasha Grant, 44, a nurse who voted in Charlotte, North Carolina, and hoped her vote for the Democratic nominee Joe Biden, would ensure that her children grow up in a safer, more accepting world.

"Especially my son," she said. "It doesn't matter if he's smart and an 'A' student. People still see him as a black male." 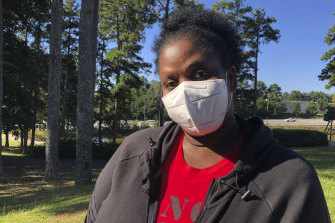 Early voter Stephanie Loftin poses for a photo outside a polling place in Duluth, Georgia, after casting her ballot in the presidential race.Credit:AP

Turnout numbers in states with available data show a surge of black participation in the first few days of in-person voting. In North Carolina, which began early voting on Thursday, black voters accounted for more than 30 per cent of turnout on the first day – well above their 23 per cent share overall in 2016. In Georgia, black voters accounted for about 32 per cent of mail ballots and in-person votes cast through to Thursday, so far outpacing their overall share of the electorate in 2016.

The pattern is similar in US. cities with large black populations. In the counties that include Milwaukee and Detroit, for instance, the roughly 283,000 in combined votes cast already is equivalent to nearly a quarter of those counties' total turnout four years ago. A drop-off in votes for Democrat Hillary Clinton in those cities in 2016 compared with Obama's 2008 and 2012 vote tallies contributed to Trump's overall victory after he carried Wisconsin and Michigan by tiny margins. 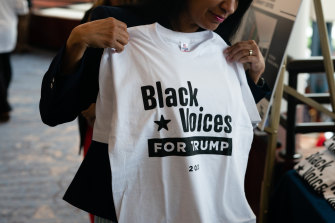 An attendee holds a “Black Voices for Trump” shirt before a campaign event for US President Donald Trump in Atlanta, Georgia last month.Credit:Bloomberg

In some parts of the country, the Black Lives Matter movement has carried into the voting booth. Last week, dozens of people protesting the police shooting death of Breonna Taylor marched from a Louisville, Kentucky, park to a basketball arena serving as an early voting site.

They chanted: "This is what democracy looks like! You can't stop the revolution!"

Another voter at the arena, Rhonne Green, 39, said he had been at the Taylor protests from the start and decided to cast his ballot early because, he said, "It's time for a change".

"We've been going through this for way too long and everybody keeps putting a Band-Aid over it or sweeping it under the rug," Green said, after emerging from voting in a T-shirt bearing the phrase, "Stand for black women." 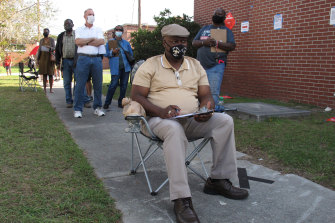 Richard Williams sits in a folding chair, filling out paperwork, as he waits in line to vote early in Savannah. Black people are going to the polls by the thousands and waiting in lines for hours to vote early.Credit:AP

So far, this year's mobilisation is on track to rival 2008, when historic levels of black turnout helped propel Obama to the White House. Since Clinton's lower performance among black voters in 2016, Democrats have lamented whether a white candidate, including Biden, could ever attract the same level of support as Obama.

Interviews with dozens of black voters, however, suggest that the driving force for many this year is not the Democratic candidate but the desire to remove the current President; some black voters said they were more motivated to vote against Trump than they were to vote for Obama.

"I was waiting for this day," said Connie Neal, who works in healthcare management in Charlotte and voted on Thursday. "We need change. We need a new president. As soon as I could do my part, why put it off?"

In addition to issues of race, black voters also said in interviews that Trump's handling of the coronavirus crisis was a major motivating force. According to the Centres for Disease Control and Prevention, black Americans are more than twice as likely as whites to become infected with the coronavirus, nearly five times more likely to be hospitalised and twice as likely to die.

Married couple Latonia and Irie Smith, both 62 and retired postal workers from Fishers, Indiana, said healthcare was the driving issue behind their decision to vote in person on October 6, the first day it was allowed in their state.

"We've been fortunate to not have been affected so far," Irie Smith said. "But we never know what the fall and winter are going to bring."

Many voters interviewed as they waited in lines in recent days in Atlanta, Houston and Durham, North Carolina, said it was important to cast a ballot in person at the first opportunity to make a statement about how important this election is.

They brought picnic lunches and chairs, wore Black Lives Matter apparel, and, in some cases, voted for the first time.

Some also said they were suspicious of using the mail – in part because of the raft of reports this year about delays at the US Postal Service and Trump's threats to withhold postal funding.

Another force resonated for others: a wariness, born of decades of voter suppression targeting blacks, to trust that their vote would be counted if they couldn't feed it into a scanner themselves.

"Since I was 18, I feel more comfortable this way," said Alyson Marsalis, 57, a psychologist from Waukegan, Illinois. "I have folk who got beaten over voting."

Said Jatona Mitchell, 37, a homecare nurse who voted last week near Charlotte: "My people fought for the right to vote."

Carole Blount, 60, of Detroit, also a retired postal worker, offered a succinct answer to the question why she cast her ballot in person. "To get it counted," she said.

"My people, my heritage, were not born with this right, and they had to fight," she said. "I owe them my vote. They fought hard and shed blood and died so I could be here in 2020 to vote."

Our weekly newsletter will deliver expert analysis of the race to the White House from our US correspondent Matthew Knott. Sign up for the Herald‘s newsletter here, The Age‘s here, Brisbane Times‘ here and WAtoday‘s here.