Blood clots are fatal for up to a quarter of patients who develop them from AstraZeneca Covid vaccine – but only strike one in 50,000 under-50s, study claims

Blood clots from AstraZeneca’s Covid vaccine are extremely rare but can kill up to a quarter of the few affected patients, a study has revealed.

The complication prompted UK health chiefs to recommend all under-40s get Pfizer or Moderna instead.

But researchers insist the link is rare, with the side effect thought to affect just one in 50,000 under-50s who are given the British-made jab.

Of those, 23 per cent died because of vaccine-induced immune thrombocytopenia and thrombosis (VITT) — the name of the side effect. Experts claimed it was deadlier than other similar clotting disorders.

Thrombocytopenia is a condition where the patient has a low count of cells that help the blood clot, known as platelets. Thrombosis occurs when blood clots block veins or arteries, and is a major cause of strokes and heart attacks.

No clots have been seen for over a month, academics at Oxford University Hospitals NHS Foundation Trust also revealed. But this is mainly because no-one is getting the first dose of the vaccine anymore.

The risk of developing VITT from the second jab — given eight to 12 weeks after the first — is significantly lower.

For this reason, the researchers who investigated the link argued a third dose would probably carry an even smaller risk of blood clots. 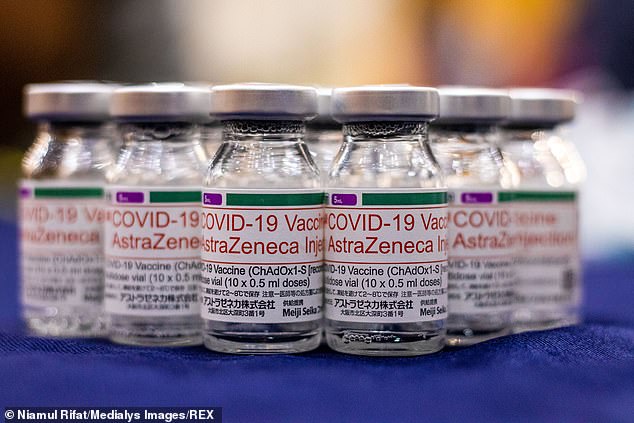 UK regulators saw 411 cases of vaccine-induced immune thrombocytopenia and thrombosis after AstraZeneca’s jab up to July 28. Forty-three cases occurred after a second dose 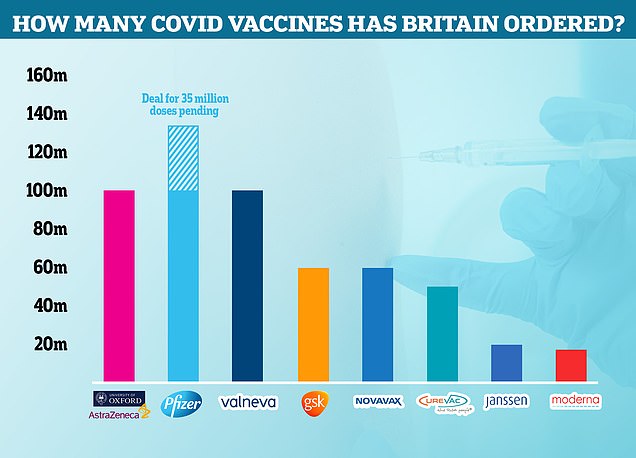 Consultant haematologist Dr Sue Pavord said: ‘If people have had their first doses and not developed VITT, their risk of getting it on their third dose would probably be very small.

‘It can be devastating: it often affects young, otherwise healthy vaccine recipients and has high mortality.

Britain has bought another 35million doses of Pfizer’s Covid vaccine for next autumn’s booster jab drive, it was claimed today.

Whitehall sources say the deal will cost in the region of £1billion, after the drug giant hiked its prices by a fifth in response to demand.

Ministers already ordered an extra 60million doses for this year’s campaign to give out third doses, which would be enough to give top-ups to all 54million British adults and fully vaccinate the 1.4million 16- and 17-year-olds who are now eligible.

Health Secretary Sajid Javid yesterday confirmed preparations were in place for the booster campaign to start next month.

But experts have repeatedly questioned whether they are even necessary. One of No10’s top scientific advisers today claimed top-ups may only be needed for anyone with a weak immune system, such as cancer patients, the elderly and transplant recipients.

Professor Adam Finn, who sits on the Joint Committee on Vaccination and Immunisation (JCVI) — which advises the Government on vaccine policy, said the evidence on whether all over-50s need them remains unclear.

Pfizer has insisted a third dose of its vaccine is necessary and BioNTech — the German firm which produces the vaccine alongside the drug giant — has said double-jabbed people need another dose for a ‘robust neutralization response’.

Vaccine equity campaigners have slammed Pfizer for profiteering during the pandemic, calling the company’s move to increase the price of its jabs ‘shamefully unsurprising’.

It comes after a study claimed Moderna’s jab is better than Pfizer’s at stopping people getting infected with the Delta variant. One expert behind the research said Moderna’s jab would be better for top-ups.

‘It is particularly dangerous when the patient has a low platelet count and bleeding in the brain.’

She added: ‘Vitt is a very new syndrome, and we are still working out what the most effective treatment is.’

UK regulators saw 411 instances of vaccine-induced immune thrombocytopenia and thrombosis after AstraZeneca’s jab up to July 28. Forty-three cases occurred after a second dose.

At that time, 24.8million Britons had received their first AstraZeneca jab and 23.6m had already been fully-vaccinated.

Dr Pavord told a press briefing for health journalists: ‘It’s important to stress that this kind of reaction to the Oxford-AstraZeneca vaccine is very rare.

‘In those aged under 50, incidence is around one in 50,000 among people who have received the vaccine.’

She also medics had not seen any cases of VITT in the last four weeks, which she said was ‘a tremendous relief’.

Their findings, published in the New England Journal of Medicine, showed the overall mortality rate was around 23 per cent.

The researchers evaluated 294 patients aged between 18 and 79. All the patients had received the first dose of AstraZeneca’s vaccine.

And treatments such as plasma exchange, which involves removing straw-coloured liquid known as plasma from the blood and replacing it with new plasma fluid, can dramatically increase survival chances for those with severe disease.

Professor Michael Makris, a thrombosis expert at University of Sheffield, who is one of the study authors, said the team were all ‘strong pro-vaccination advocates’.

Professor Makris, who himself was vaccinated using AstraZeneca, said: ‘I believe the whole world should be vaccinated against Covid.

‘We are not here to say anything bad about AstraZeneca, it is a matter of targeting it.’

It comes after it was claimed Britain has already bought another 35million doses of Pfizer’s Covid vaccine for next autumn’s booster jab drive.

Whitehall sources say the deal will cost in the region of £1billion, after the drug giant hiked its prices by a fifth in response to demand.

Ministers ordered an extra 60million doses for this year’s campaign to give out third doses, which would be enough to give top-ups to all 54million British adults and fully vaccinate the 1.4million 16- and 17-year-olds who are now eligible.

Health Secretary Sajid Javid on Tuesday confirmed preparations were in place for the booster campaign to start next month.