Giggly Harry threw royal stuffiness out of the window and couldn’t contain his happiness as he announced the birth of his son, says body language expert

Prince Harry showed ‘whole-body happiness’ as he announced the birth of his first child today because he was ‘too proud and joyful to do anything else’, a body language expert has revealed.

The Duke of Sussex, 34, spoke to reporters live in Windsor this afternoon to confirm the safe arrival of his son, who was born at 5.26am today weighing 7lbs 3oz.

He said his wife Meghan, 37, and their newborn baby are both doing well and that childbirth was ‘the most amazing experience I could ever have possibly imagined’.

According to body language expert Judi James, Harry abandoned the traditional scripted nature of royal announcements because he was too elated.

She said his fast blinking reveals high adrenaline levels and edge-to-edge teeth show his previous stress about the birth.

He jumped forward as he uttered the words ‘baby boy’, unable to contain his excitement, and clapped his hands together at the end, which shows he could not wait to be reunited with his bundle of joy.

Harry even thanked the royal horses visible in the background of the video as he was so keen to share his ‘incredible news’. 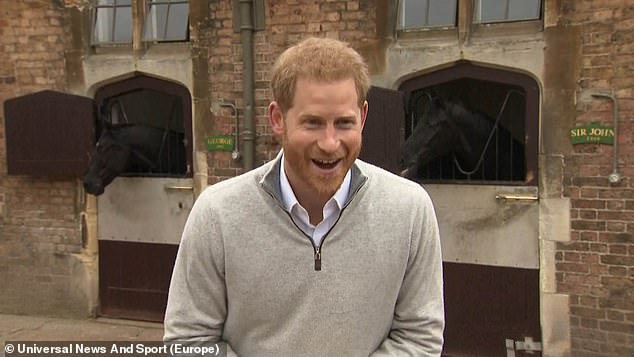 Prince Harry displayed ‘whole-body happiness’ when he made the announcement his son had been born in Windsor this afternoon, says body language expert Judi James. He leaped forward as he said the words ‘baby boy’, highlighting his elation 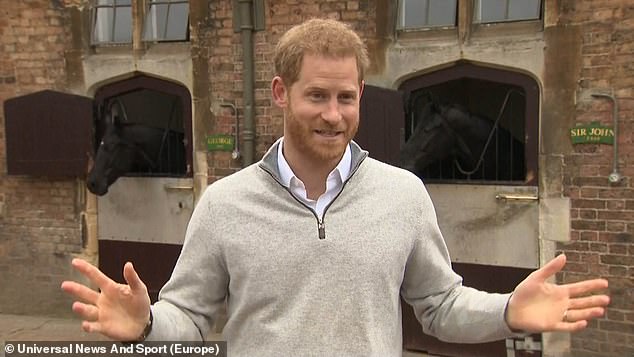 Describing the experience as ‘amazing’ he throws his hands out and erupts into a loud giggle, which showed he was ‘too proud and joyful’ to adhere to the usual royal stuffiness

Body language expert Judi James told MailOnline: ‘It’s not often we see any royal using spontaneously happy and excited body language to this level but Harry was clearly too proud and joyful to do anything else but share his great news with anyone around, including the horses, which he randomly thanked at the end of his announcement!

‘Harry is into whole-body happiness here, spontaneously jumping forward as he says the words ‘baby boy’ and describing the experience as ‘amazing’ while throwing his hands out and erupting with a loud giggle.

‘His rapid blink rate shows the adrenaline rush is still pumping in his veins, although the edge-to-edge teeth in his smile hint at some previous stress levels about the birth.

‘His face changes when he talks about his wife and how impressed he is with her and he touches his forehead and shakes his head in a gesture of bewilderment.

‘The hand clap at the end shows he can’t wait to get back to his ‘little thing’ though.’ 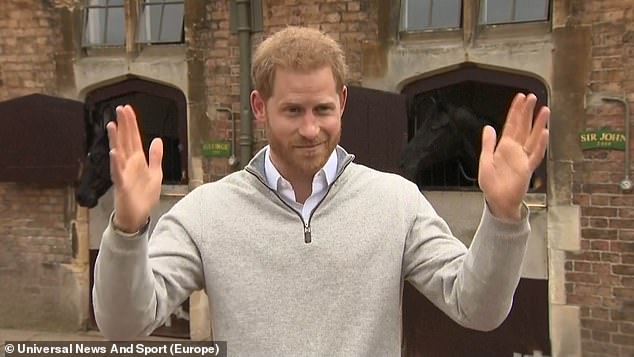 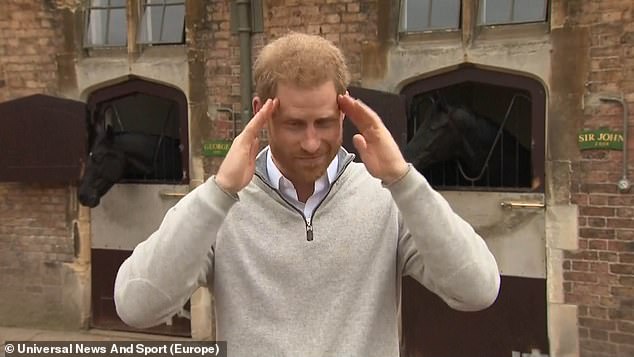 ‘His face changes when he talks about his wife and how impressed he is with her and he touches his forehead and shakes his head in a gesture of bewilderment,’ body language expert Judi James told MailOnline 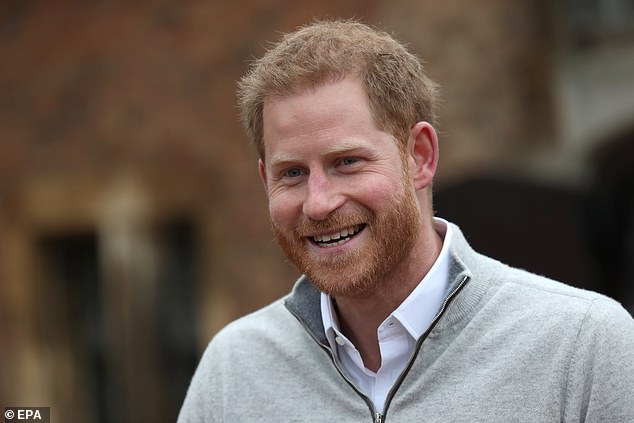 An overjoyed Harry said in his statement: ‘Mother and baby are doing incredibly well. It’s been the most amazing experience I could ever have possibly imagined.

‘How any woman does what they do is beyond comprehension, but we’re both absolutely thrilled and so grateful to all the love and support from everybody out there. It’s been amazing, so we just wanted to share this with everybody.’

Asked if they had any names yet, he said: ‘Still thinking about names. The baby is a little bit overdue, so we’ve had a little bit of time to think about it.

‘That’s the next bit, but for us I think we will be seeing you guys in probably two days’ time as planned as a family to be able to share it with you guys and so everyone can see the baby.’

Asked what it was like to be present for the birth, he laughed and said: ‘I haven’t been at many births. This is definitely my first birth. It was amazing, absolutely incredible, and, as I said, I’m so incredibly proud of my wife.

‘As every father and parent will ever say, you know, your baby is absolutely amazing, but this little thing is absolutely to-die-for, so I’m just over the moon.’ 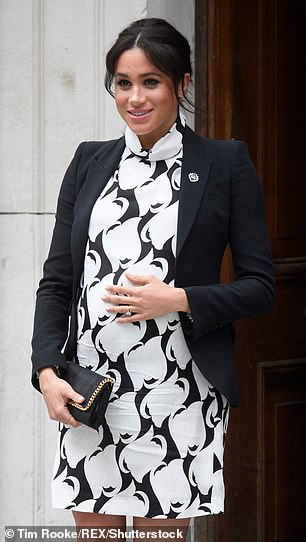 Meghan is pictured at King’s College, London in March (left) and with Harry at at Buckingham Palace in the same month (right)