Boeing’s bill for the 737 MAX grounding could exceed $25 BILLION – but new CEO vows to resume production in spring, months before troubled plane returns to service

Boeing’s bill for the 737 MAX grounding could balloon to more than $25 billion, analysts estimated on Wednesday, a day after the U.S. planemaker warned of further delay in returning its once best-selling jet to service.

The company has already booked $9 billion in costs related to the grounding, including $5.6 billion as compensation for airline customers and $3.6 billion in charges to cover additional production costs.

Jefferies analyst Sheila Kahyaoglu said Boeing may now need to boost its compensation package for customers by another $10 billion and revise its cost estimate related to the 737 MAX’s production by an additional $5.4 billion.

Boeing CEO Dave Calhoun told reporters on Wednesday that the company expects to resume 737 MAX production months before its forecasted mid-year return to service and said it did not plan to suspend or cut its dividend. 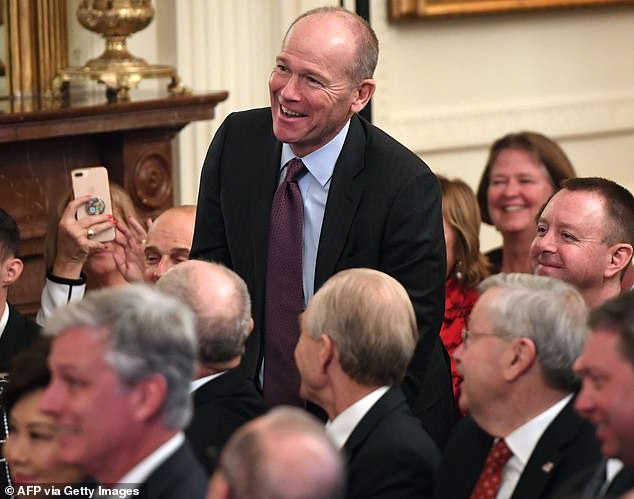 The company announced a production halt in December, when the global grounding of the fast-selling 737 MAX following two deadly crashes in five months looked set to last into mid-2020 — a timeline pushed back after Boeing endorsed new simulator training for pilots.

The company said on Tuesday it now expects regulators to approve the plane’s return to service in the middle of the year. Calhoun said he did not see recent issues raised about wiring or software as ‘serious problems.’

The production delay threatens to cut U.S. gross domestic product by as much as 0.5 percentage points. President Donald Trump on Wednesday told CNBC Boeing is a ‘very disappointing company.’

United Airlines said Wednesday it does not expect to fly the Boeing 737 MAX this summer.

Boeing shares closed down 1.4% on Wednesday. 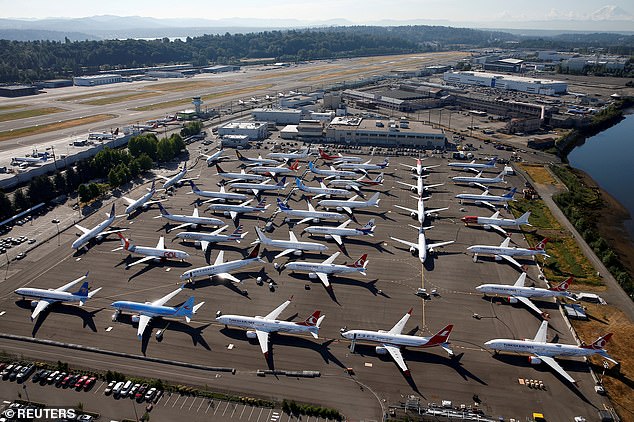 Grounded Boeing 737 MAX aircraft are seen parked in an aerial photo at Boeing Field in Seattle, Washington in a file photo

Calhoun said Boeing is not planning to cut or suspend the dividend because Boeing has the ‘financial capacity and capability to do the things we need to do.’ Calhoun said he ‘will stay on that path unless something dramatic changes.’

Calhoun declined to provide a specific date for resumption of production, but said it ‘will be reinvigorated months before that moment in June because we have to get that line started up again.’ He also said the company would make some changes to the 737 MAX production line to make it more efficient.

The CEO said the company ‘will slowly, steadily bring our production rate up a few months before that date in the middle of the year.’ He said the company was not planning to lay off any employees because of the latest MAX delay.

The latest push back in the forecasted return to service is due to the company’s decision to endorse simulator training for pilots before they resume flights, Calhoun said. ‘We can get this thing back on its horse and we will,’ he added.

Calhoun was a director at Boeing for a decade before taking over as CEO earlier this month. The board ousted Dennis Muilenburg in December amid rising anger by regulators, politicians and customers.

He said the company should have not have repeatedly revised the plane’s forecasted return. ‘It was hard for anybody to trust us,’ Calhoun said.

Calhoun said before certification there will be ‘a few more things somewhere along the way that the FAA and us will determine need a little extra work and we’ll do it. They won’t be big emergencies things, they won’t be things that take the airplane down.’