London: Boris Johnson has cemented his position as the most likely next prime minister of Britain with a dominant win in the first round of Conservative party voting.

The former foreign secretary and London mayor won more votes from his fellow MPs than the next three contenders put together, in a round that saw three of his nine rivals knocked out. 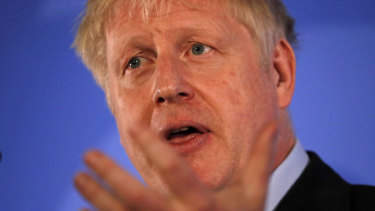 Boris Johnson has secured a commanding lead after the first-round of ballots in the contest to become Britain’s next prime minister.Credit:AP

Johnson had 114 of the 313 votes from his House of Commons colleagues, followed by current foreign secretary Jeremy Hunt with 43, Environment Secretary Michael Gove with 37 and former Brexit Secretary Dominic Raab with 27.

“Thank you to my friends and colleagues in the Conservative & Unionist Party for your support,” Johnson said on Twitter after the results were published.

“I am delighted to win the first ballot, but we have a long way to go.”

Hunt said he was “delighted to come second”, adding “this serious moment calls for a serious leader”, an unsubtle poke at the mercurial Johnson.

Gove said it was “all to play for” and Raab said his campaign was “just getting started and we’ve got a good base to build on”.

Rory Stewart, a junior minister who has presented as a dark horse candidate opposed to a ‘no-deal’ Brexit, narrowly scraped through to the second round with 19 votes. In a comment possibly intended as tongue-in-cheek, he said he was “getting some real momentum here… it’s increasingly clear it’s me against Boris”.

Stewart vowed that if PM Johnson suspended Parliament to force through a no-deal Brexit he would hold a rogue session of Parliament across the road and “bring [Johnson] down”.

There will be another round of voting on Tuesday. In that round candidates will need at least 32 MPs’ votes not to be eliminated.

Some candidates may decide to drop out before then in order to build support for other alternatives to Johnson – or cement his lead. 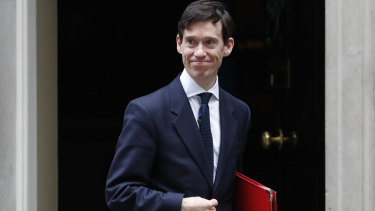 Rory Stewart has narrowly scraped through to the second round.Credit:AP

If necessary there will be more rounds after Tuesday until two candidates remain for a head-to-head postal vote by Conservative Party members with the result due in the week beginning July 22.

Meanwhile, Johnson already has more than enough supporters (as long as he doesn’t lose any deserters or tactical voters) to be assured of getting to the final two.

Polls have shown Johnson as the clear favourite with the Tory grassroots. Whoever comes in second may come under pressure to stand aside to give Prime Minister Johnson more time to settle his government, fine-tune his Brexit strategy and somehow get it through the House of Commons by the October 31 Brexit deadline.

In previous such Conservative contests the leading candidate at the end of the first round did not always go on to win.

Most famously, in 1990 Prime Minister Margaret Thatcher was challenged by Michael Heseltine and won more than half of the first vote, but was persuaded to resign and John Major came from nowhere to beat Heseltine in the next round and go on to take the prime ministership.

However, pundits are predicting that based on Thursday’s numbers and given party member sentiment Johnson is unbeatable.

According to The Spectator, Johnson’s team knew exactly how much support he had, with one adviser handing him a sealed envelope which correctly predicted the result before it was counted.

His campaigners know “who is likely to switch from those knocked out or with weak numbers and can, therefore, start preparing for the battle of the final two while the other candidates scrabble for second place,” the magazine reported.

Johnson reportedly consulted his friend and political ally, Australian election guru Lynton Crosby, every day of his campaign for the leadership.

On Wednesday he promised to “do for the whole country what we did in London” when he was mayor.