Boris Johnson again failed to categorically rule out a post-Brexit general election as he took a selection of questions on Facebook Live today.

He was asked by ‘Sam from Newport’ about ‘what lengths am I going to, to prevent Parliament from blocking Brexit and does it include an election after October 31?

He replied that he believes the British public have ‘had a lot’ of elections and electoral events in recent years.

‘I think what they want us to do is get on and deliver Brexit on October 31. I never tire of telling you that’s what we’re going to do,’ he added.

All eight questions were pre-selected by Downing Street and those chosen were all about key areas of Mr Johnson’s campaign ahead of Brexit in October. 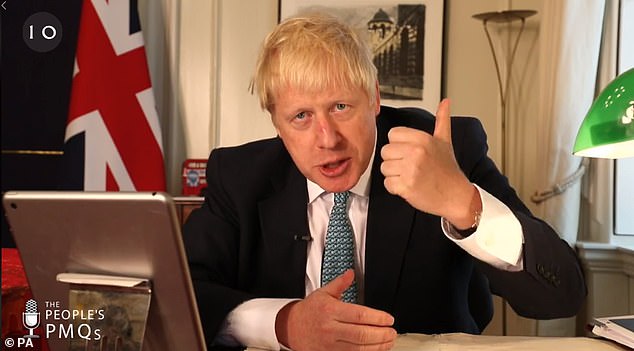 The Prime Minister consistently ducked the issue of a general election, saying he doesn’t ‘want’ one to happen.

But Number 10 has been gearing up for a November election in recent weeks.

Mr Johnson has spearheaded a series of announcement on law and order designed to make the Tories look tough on crime.

And is team has cancelled the holidays of senior ministerial aides.

The Prime Minister’s chief strategic adviser Sir Edward Lister emailed all special advisers last week informing them that no holidays should be booked until the end of October.

The move is likely to fuel speculation that ministers are preparing the ground for a general election after MPs return to Westminster in September.

Mr Johnson addressed questions on Brexit, mental health, knife crime and the Union during the session, watched by more than 7,000 people at the peak of the broadcast.

The broadcast lasted for some 13 minutes and 30 seconds, although this included a 60-second countdown and a video before Mr Johnson answered questions for around 12 minutes.

The Prime Minister appeared sat at a desk, with a red London bus behind him and a tablet computer propped up in front of him.

Boris Johnson sensationally accused Remainer MPs of ‘collaborating’ with the EU to stop Brexit as he held his first ‘People’s PMQs’ on Facebook today.

The Prime Minister took aim at politicians trying to thwart attempts to leave on October 31 with or without a deal with Brussels as he appeared live from Downing Street on the social media site.

His strongly-worded intervention came as Tory Eurosceptics launched a furious backlash against Philip Hammond after the former chancellor co-ordinated a Remainer attack on the PM, accusing him of torpedoing any chance of a new Brexit deal.

Mr Hammond authored an explosive letter to Mr Johnson, signed by a ‘Rebel Alliance’ of 20 of the former Cabinet minister’s Tory Europhile colleagues, in which he suggested the PM had ‘set the bar so high that there is no realistic’ chance of a new divorce agreement being struck with Brussels.

Meanwhile, in a column for The Times he took aim at Mr Johnson’s top aide Dominic Cummings who he accused of ‘pulling the strings’ to steer Britain towards a No Deal split from the EU.

In reply to a question about Brexit and parliamentary opposition from ‘Luther in Cheshire’, Mr Johnson said: ‘Luther you have asked the crucial question and there is a terrible kind of collaboration going on between people who think they can block Brexit in Parliament and our European friends.

The other questions were:

Scottish farmer ‘Mickey’ asked what he would do to protect the Union.

Mr Johnson cited his role as ‘minister of the Union’, under which he would ‘stress the benefits that flow to us all from the Union’. He also cited jobs in Scotland ‘built on ‘investment from the whole of the UK’.

Amy in Weaverham, Cheshire, asked: What are you going to do to restore the British people’s faith in politics and politicians after the last three years of chaos, division and broken promises?’

He replied: ‘We are coming out of the European Union on october 31. That’s what the British people voted for and they feel very frustrated.’

Shal, who lives in the countryside, asked how he would help rural people who feel ‘isolated from politics of London and Westminster’?

Mr Johnson cited Brexit, saying it was ‘at least partly to do with people in towns and regions of the UK feeling they weren’t being heard’. He also mentioned plans for regional devolution and his pledge to roll out fibre broadband.

Kyle in Stourbridge asked what he was doing about mental health provision.

The PM said that ‘so many of the problems of youth crime, youth violence and crime of all kinds are associated with mental health problems’ and said state agencies had to work together on ‘wraparound care’.

Mr Johnson said it was a ‘scourge’ and ‘a terrible thing’. He repeated his leadership campaign pater from earlier this summer by referencing his time as mayor of London from 2008- 2016. He talked about an approach that married helping kids with activities and jobs but also being ‘tough on law and order’, plus ‘a lot of stop and search’.

Oliver asked who his political hero was.

Mr Johnson said Winston Churchill and then added 5th century BC Greek statesman Peracles of Athens, who ‘believed in great infrastructure projects .. the many not the few … but above all will go down as one of the most powerful articulators of the idea of democracy.’