Boris Johnson says it is ‘Loch Ness Monster, Bermuda Triangle’ territory for Labour to claim the NHS is up for sale under his Brexit deal as the PM takes his election campaign to the East Midlands and enjoys a cup of tea with health service staff

Boris Johnson today labelled Labour claims of the NHS being put up for sale in a post-Brexit trade deal with the US as ‘pure Loch Ness Monster, Bermuda Triangle stuff’.

The Prime Minister took his election campaign to a hospital in the East Midlands this morning where he enjoyed a cup of tea with staff and launched a defence of the health service.

Jeremy Corbyn has repeatedly claimed that Mr Johnson is planning ‘sell out’ the NHS in a trade deal with Donald Trump once the UK has left the EU.

The Tories have always rejected the claims and Mr Johnson today went even further as he compared Mr Corbyn’s accusations to myths like the Loch Ness Monster. 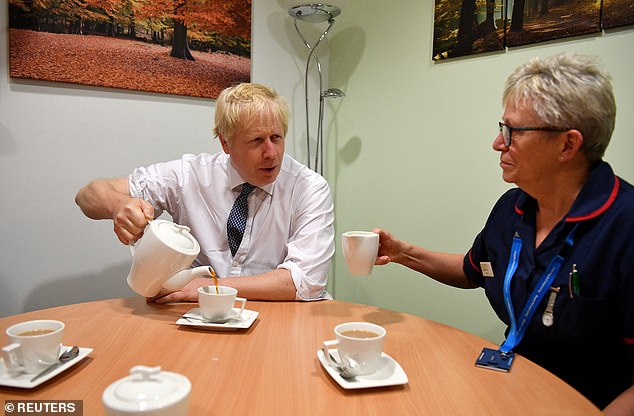 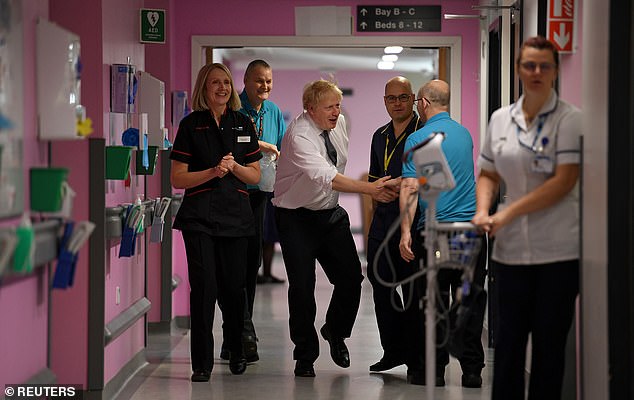 Asked if he would legislate to protect the NHS from US intervention, Mr Johnson said: ‘We can do free trade deals with countries around the world but under us the NHS is not for sale. It’s not going to be on any kind of international trade negotiation.

‘The NHS, free at the point of use, is a fantastic service and we not only believe in it, but are investing more in it than at any time in recent memory and we’ll continue to do so.’

The NHS will be a key battleground in the run up to December 12 as both the major parties try to persuade voters that the health service is safe in their hands.

Priti Patel, the Home Secretary today unveiled plans for an ‘NHS Visa’ to fast track doctors and nurses from abroad into vacancies in the health service.

Medical staff hoping to work here will have a decision on their applications within two weeks, and the visa fee will be half the normal price.

The proposal is part of the Conservative Party’s plans to introduce a post-Brexit Australian-style points system which will prioritise migrants with much-needed skills.

The Tories have made a point so far during the campaign to hit back hard whenever Labour has claimed the NHS could be sold off to the US.

The claims were undermined when Mr Trump rubbished the suggestion that the health service would be ‘on the table’ during trade negotiations.

Mr Trump also said the first he had heard of the idea had actually been from Mr Corbyn.

The US President told Nigel Farage during an LBC Radio intreview at the end of October: ‘I mean, it’s so ridiculous – I think Corbyn put that out there.’

He added: ‘We wouldn’t even be involved in that… it’s not for us to have anything to do with your healthcare system. No, we’re just talking about trade.’ 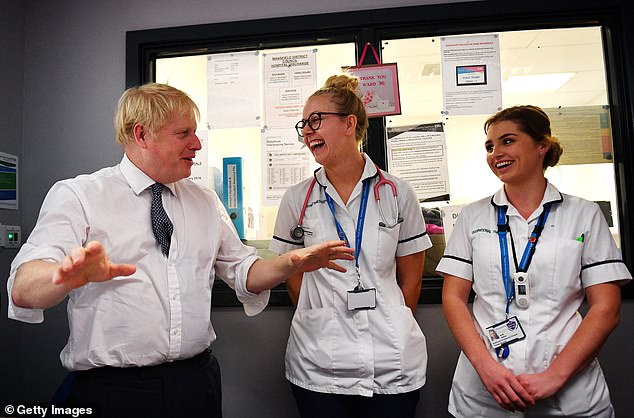 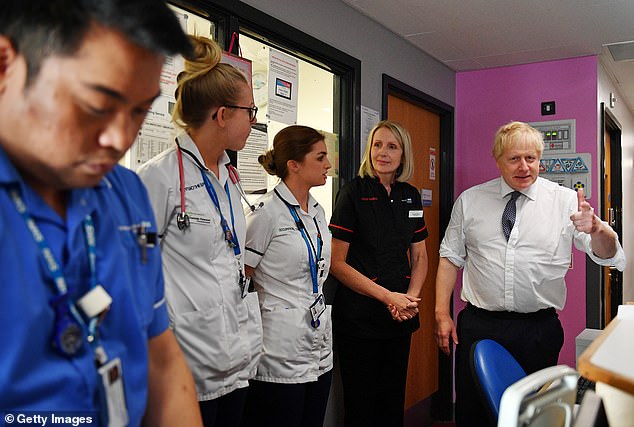 Mr Corbyn hit back on Twitter at the time and said: ‘Donald Trump is trying to interfere in Britain’s election to get his friend Boris Johnson elected.

‘It was Trump who said in June the NHS is ‘on the table’. And he knows if Labour wins US corporations won’t get their hands on it. Our NHS is not for sale.’

Matt Hancock, the Health Secretary, has accused Labour of peddling ‘pathetic scare stories’ in a desperate bid to win over voters.

He said after Mr Trump’s intervention: ‘How many more times do Labour’s pathetic scare stories need to be rubbished?

‘Labour are totally confused on Brexit & have nothing positive to say, so they just spread nonsense.’