They look like treats that you could buy from a sweet shop and most children would be only too eager to try them. But these innocent-looking ‘sweets’ – openly advertised on Instagram – are laced with high-strength cannabis.

A Mail on Sunday investigation has exposed the trade in illegal marijuana edibles, or ‘medibles’. And brazen drug dealers are using the social media site to offer cakes and chocolate bars containing powerful tetrahydrocannabinol, or THC, the main psychoactive constituent of cannabis.

In an apparent effort to maximise their appeal to children, the products are designed to look and taste like popular sweets such as Mars, M&Ms and Smarties. They can be bought at the click of a button, but boast dangerous levels of THC, which is known to increase the risk of developing psychotic illnesses including schizophrenia.

Last night, Mars and Nestlé, which makes Smarties, condemned the use of their famous brands. 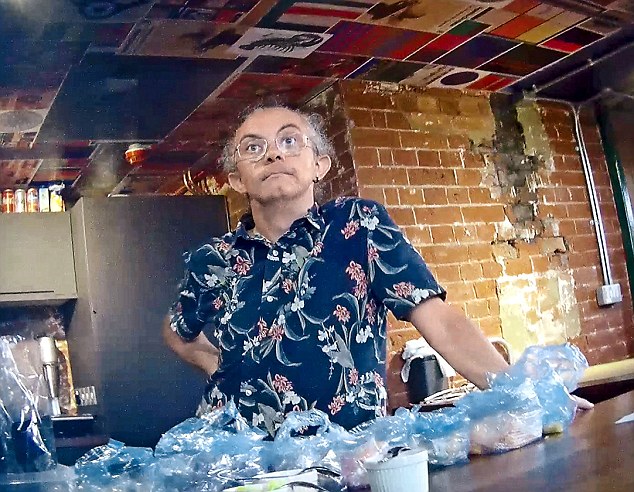 A dealer, who goes by the name Penn Chann, is filmed by Mail On Sunday reporters in Bethnal Green

Undercover reporters were able to buy hundreds of pounds worth of edible cannabis products after contacting dealers via Instagram. Alarmingly, the number of drug-dealing accounts has soared as police have come under increasing fire for turning a blind eye to the sale of cannabis. This comes at the same time that senior police are warning of a huge rise in the number of dealers of edible cannabis products.

Detective Constable Greig Baxter, from Police Scotland, said: ‘We have seen a significant increase in the number of individuals buying and selling edible cannabis products in recent years. Some of the dealers now have huge operations almost like multinational companies.’

He added: ‘Labelling these chocolate products with popular brands could make these products more appealing to a child. It looks like a treat but it is dangerous.’

The market has become so competitive that sellers post daily ‘deals’ and even competitions on their pages, which have thousands of followers, including some who appear to be schoolchildren wearing uniforms.

Experts warn that eating cannabis can be far more dangerous than smoking it – because of the greater risk of accidental overdose. Professor Keith Humphreys, of Stanford University in California and King’s College London, said: ‘Edibles take a while to take effect, so some people may then eat more as they don’t feel anything.’ This raises the possibility that users take a dangerously high dose before they feel the effect of the drug. ‘This can lead to panic attacks as they have taken high levels of THC,’ he added.

The Scotland Edibles Instagram page, which has almost 6,000 followers, posts daily photographs and videos showing fake Mars, Smarties and M&Ms-branded cannabis products. These are sold on to a network of dealers, who in turn sell them to the public. Images on the page also show a man who apparently runs the firm wearing a Rolex watch, driving an Audi SUV and sailing in his own boat. In East London, a dealer with the pseudonym Penn Chan advertised an event in Bethnal Green on Instagram. After paying a £15 entry fee, our undercover reporter saw shoppers being offered gums, hard-boiled sweets and ‘vegan protein balls’ in what was more like a farmers’ market for cannabis connoisseurs than a shady backstreet deal. Visitors were offered samples, talked through the illegal menu and were even invited to stay for a coffee as Chan explained how he usually sells cannabis chocolates, but had been hampered by the heatwave which had melted his wares. Customers were given a choice of strengths, with Chan offering hard-boiled sweets with either 20mg or 50mg of cannabis oil.

One woman said a previous purchase had been too strong and she had needed to halve or quarter them. Single hard sweets were priced between £2 and £5 depending on the dosage and packets of ten gummy bears sold for £20 which we tested in a lab and found contained illegal cannabis. Scotland Edibles requests that prospective buyers contact one of its ‘certified vendors’, who can deliver in person or organise postage across the UK and overseas.

They could come from the shelves of any supermarket or corner shop, but these sweets are infused with cannabis and are cynically produced to appeal to children.

Recreations of famous confectionery, including Gummy bears, Smarties and Mars Smarties chocolate, are used to win a portion of the lucrative so-called ‘medibles’ market.

Their makers combine the bright colours that academics say attract children and the famous logos known to spark excitement among youngsters around the world. 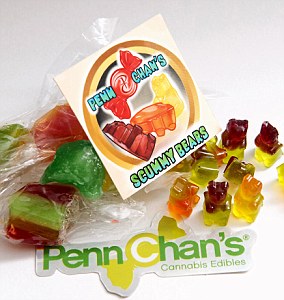 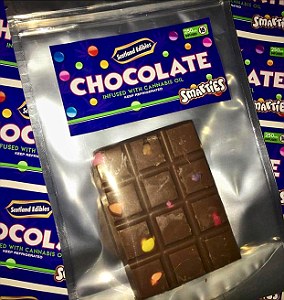 Recreations of famous confectionery, including Gummy bears, Smarties and Mars Smarties chocolate, are used to win a portion of the lucrative so-called ‘medibles’ market

Our reporters also met vendors in Glasgow and Perth after being sent a ‘menu’ of sweet treats, plus three strains of skunk and THC liquid, which can be added to drinks and e-cigarettes. In Glasgow, we bought £100 of vacuum-packed ‘Mars’-branded cannabis chocolate bars and cakes from a dealer calling himself The Glasgow Gardener.

Arriving in a silver VW Golf GTi, the bearded man in his 30s opened the glove box and arm rest, which were packed with drugs, and joked: ‘I’ve got tons of hiding places in here.’ He also sold us a quarter-ounce of ‘Toxic’ skunk for £70. Each Mars-branded cannabis cake, advertised as containing 150mg of THC, cost £15 and a Smarties chocolate ‘melt’ cost £20.

The Glasgow Gardener warned our reporter that the chocolate was ‘very strong’ and to only eat a third of a cake to ensure she was not ‘knocked out’. ‘They are made from skunk so they pack a punch,’ he claimed. ‘They take about 15 to 20 minutes to kick in so be careful.’

A dealer in Perth, calling himself Perth Edibles, sold a reporter two Scotland Edibles ‘Mars’ chocolate bars advertised as containing 250mg of THC for £25 each.

After sealing the deal at a retail park full of families with children, the hoodie-wearing dealer said: ‘I smoke quite a lot of weed and I ate one of those bars and I was absolutely wasted.

‘I thought I heard voices and thought the police were looking for me… it was scary.’ Under the Misuse of Drugs Act 1971, the maximum penalty for cannabis possession is a five-year jail term. Anyone supplying it can face up to 14 years.

Last night Tory MP Peter Bone said: ‘We should crack down hard on this because they can taken by children if they think they are sweets or cakes. They will be using them without knowing the risks.’

A spokesman for Mars Wrigley said: ‘We strongly condemn the unlawful use of our chocolate brands on these illegal products.’

Nestlé added: ‘This irresponsible and illegal act could have very serious consequences and we are extremely concerned by the misuse of our brand.’ 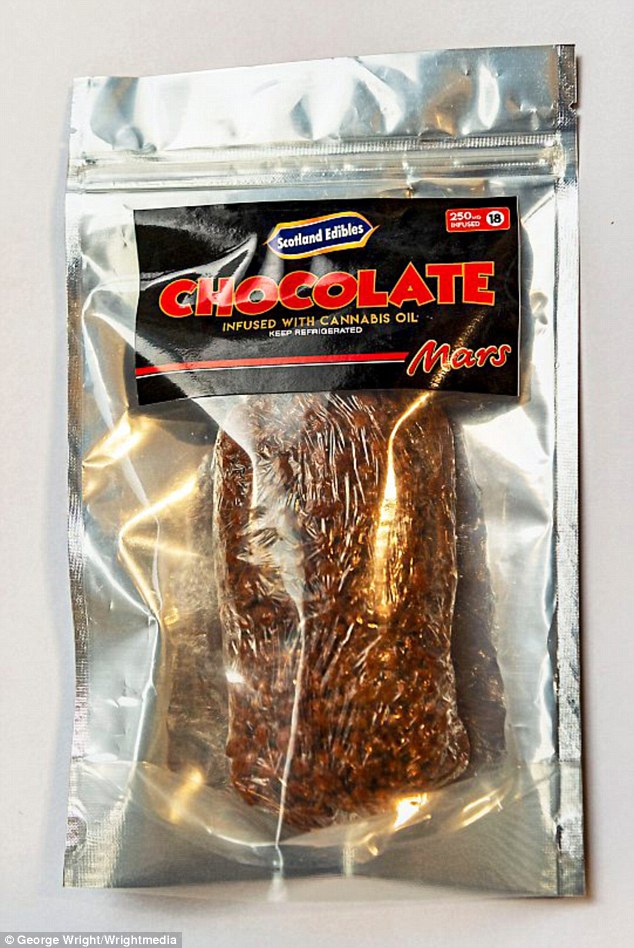 A dealer in Perth, calling himself Perth Edibles, sold a reporter two Scotland Edibles ‘Mars’ chocolate bars advertised as containing 250mg of THC for £25 each

There are more than 1.3 million images tagged with ‘edibles’ on Instagram, underlining the popularity of the cannabis items online.

Accounts selling the illicit foods often use coded terms such as ‘THC’ or ‘420’ – which represents April 20 written the American way, the day that cannabis consumption is ‘celebrated’ worldwide – and mask the fact they are selling drugs.

After cannabis was legalised in the US state of Colorado in 2014, experts saw a rise of 50 per cent in the number of children needing hospital treatment after eating the drug. Almost three-quarters of children taken to a clinic or hospital after taking cannabis had eaten the drug rather than smoked it.

Bright-coloured food in novelty shapes is particularly attractive to children, according to a study by the University of Washington that examined how children could be exposed to edible cannabis.

An Instagram spokesman said: ‘We employ a team of reviewers who work 24/7 to check and remove content or accounts that violate Instagram’s Community Guidelines. Buying or selling illegal or prescription drugs is prohibited on Instagram.’

Neither Penn Chan nor The Glasgow Gardener responded to a request for comment.

The young are most at risk – and could suffer psychosis

By Ian Hamilton for The Mail On Sunday

People might think that eating cannabis is safer than smoking it, but in many ways the opposite is true. The biggest problem is that users don’t know how much is in the product they are ingesting or how strong the cannabis in it is.

Then there is the delay between consuming the cannabis edible and feeling its effects, which can vary from 30 minutes to a couple of hours.

This delayed reaction not only varies from person to person, but can be different for the same person depending on the strength of what they have taken.

There is a clear danger that some people could ingest an edible and wrongly think it isn’t working so take more. This can lead to problems which go beyond just feeling nauseous and could potentially trigger a panic attack or even a psychotic experience.

Those most at risk are younger people and naive users who have no tolerance to cannabis.

Using images and logos familiar to children clearly makes these edibles attractive and may fool children into thinking they are harmless.

In fact, children’s bodies process chemicals like cannabis differently to adults, meaning a dose that an adult might tolerate could cause a child to lose co-ordination, suffer a rapid heartbeat or develop breathing problems. 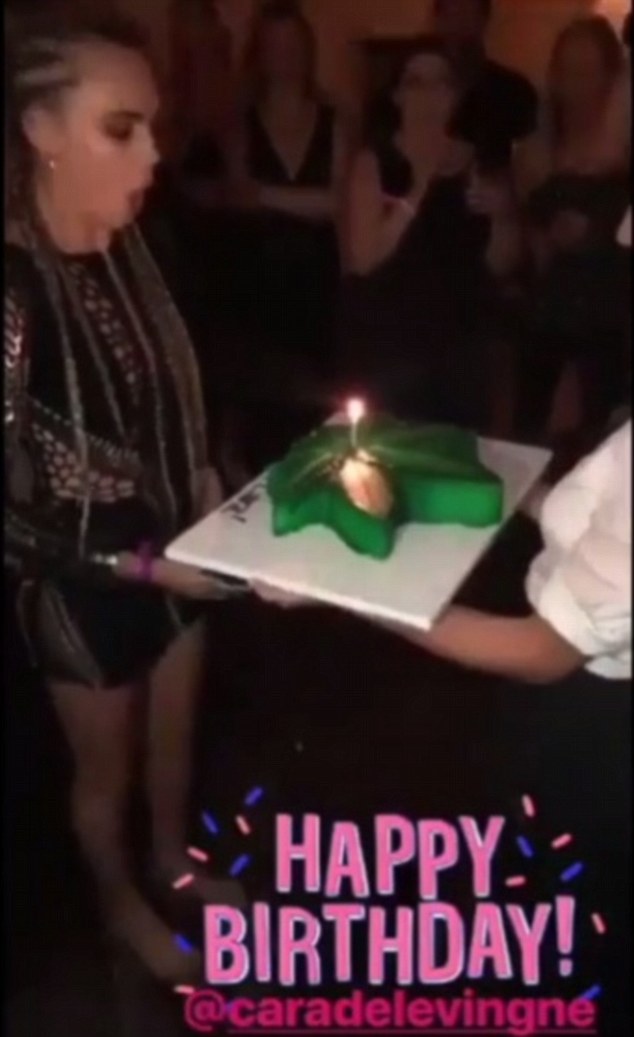 Preparing to blow out a candle, Cara Delevingne joins the growing ranks of ‘cannabis chic’ celebrities. The cannabis leaf-shaped cake was presented to her as she celebrated her 26th birthday last week. Like a host of stars popular with youngsters, including Miley Cyrus, the model has proudly posted pictures of herself smoking marijuana on social media