Jacob Rees-Mogg last night called on the Prime Minister to ‘chuck Chequers’ as he told grassroots Tories the UK should not fear a no-deal Brexit.

In a strongly worded letter to the chairmen of local Conservative parties, he said Theresa May should stand up to ‘bullying’ from Brussels and ‘believe in Britain’.

Mr Rees-Mogg’s forthright message came just as Brexit Secretary Dominic Raab prepared to publish a series of papers on how Britain will cope if negotiations with the EU collapse. Mr Raab will say today that he is confident a good withdrawal deal is ‘within our sights’ – while insisting ministers are ready if talks fail.

But in his letter last night, Mr Rees-Mogg, chairman of the pro-Brexit European Research Group of Tory MPs, said Britain had nothing to fear from a no deal because Brussels needs a deal more than we do.

This is because, if no deal is reached, the EU will not receive the £40billion ‘divorce settlement’ Britain has promised to pay.

Mr Rees-Mogg – seen as a Tory leadership candidate if Mrs May falters – called on her to ditch the Brexit plans agreed with her Cabinet at Chequers last month, writing: ‘It is time to face down vested interests in the establishment and put democracy first.

‘Yet most of all, it is time to chuck Chequers, respect the referendum, be out of Europe, take back control and believe in Britain.’

On what promises to be another dramatic day for Brexit:

North East Somerset MP Mr Rees-Mogg said Mrs May’s Chequers deal was the ‘wrong deal for Britain’ and does not ‘implement the will of the British people’, adding: ‘The white paper does not respect the result of the referendum and does not give us control of our borders, laws and money. Chequers will tie our economy and our future to the EU indefinitely.’

He wrote: ‘This is why the Prime Minister should “chuck Chequers” and instead seek a Canada style free trade agreement with the EU to make the most of the global opportunities that lie ahead.

‘The United Kingdom does not need to do a deal with the EU. The EU needs to do a deal with us at all costs. No deal means no divorce bill – handing a £40billion Brexit bonus to Brussels. It is time the Government realised that the EU stands to lose much from no deal being agreed and stopped being cowed by the EU’s threats.’ 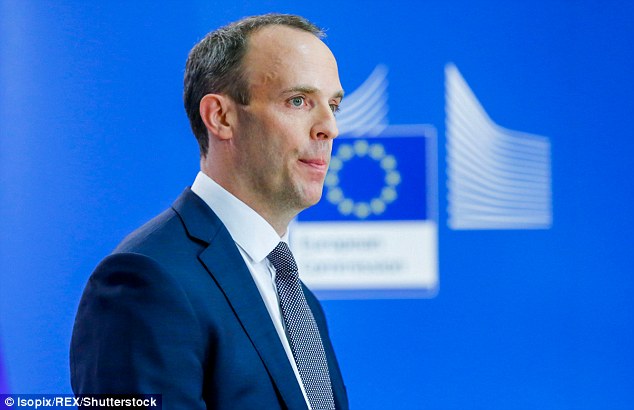 Mr Rees-Mogg concluded the letter to all Conservative Association chairmen by saying: ‘Please feel free to circulate this letter and briefing note to members and your constituents to assure them that the Prime Minister has alternatives, and that if the bullying stance of the EU continues we can leave on 29 March 2019 with either Canada or WTO terms. We believe in Britain.’

As part of its no-deal planning, the Treasury will today commit to guarantee EU funding promised to poorer regions such as Cornwall and parts of northern England, as well as scientific research.

The plan is one of the ‘technical notices’ published today by Mr Raab, laying out how Britain will cope if talks with the EU collapse.

Mr Raab will also accuse Brussels of being irresponsible by refusing to work with the UK to prepare for a potential no-deal.

It is understood one of the papers will guarantee funding for scientific research under the ‘Horizon 2020’ scheme. And farm payments under the Common Agricultural Policy will also be maintained.

A source said: ‘The Government will commit to the Northern Powerhouse by maintaining the structural fund.’

Mr Raab will say the series of technical briefings will ensure the ‘smooth, continued functioning’ of the UK economy in the event of a no-deal Brexit.

The Brexit Secretary will also say the Government will take ‘unilateral action’ to maintain continuity if negotiations break down.

In the event of a no-deal, the UK will ‘continue to behave as responsible European neighbours’.

In a speech, Mr Raab will state: ‘I remain confident a good deal is within our sights, and that remains our top, and overriding, priority. If the EU responds with the level of ambition and pragmatism, we will strike a strong deal that benefits both sides.

‘But, we must be ready to consider the alternative. We have a duty, as a responsible government, to plan for every eventuality.

‘These technical notices – and the ones that will follow – are a sensible, measured, and proportionate approach to minimising the impact of no-deal on British firms, citizens, charities and public bodies.’

Mr Raab will say the UK, in the event of a no-deal, would ‘diverge when we are ready, on our terms’ from the EU.

The Brexit Secretary will explain there have already been planning discussions between the Bank of England and the European Central Bank for no deal and called for talks to begin on data protection and between port authorities.

‘For our part, if the negotiations fail, we will continue to behave as responsible European neighbours, partners and allies,’ he will say.

Under current plans, the technical notices will be published in batches, starting today and running through September.

But Labour’s Brexit spokesman Sir Keir Starmer dismissed the documents as a distraction, saying a no-deal would be ‘catastrophic’.