As late as October last year, Russ Shepherd thought the idea of making money from converting classics and old rustbuckets into electric cars was so far-fetched he almost cut it from the business model.

There was no questioning the rapidly growing interest in electric vehicles: More than 14,000 were on the roads by January 2020 – almost double 2018 figures – and Mr Shepherd's team at EVolution Australia was selling hundreds of wall chargers and other pieces of equipment every year. 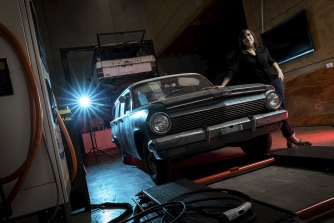 But if brand new cars were hitting showrooms for prices comparable to complex conversions – usually upwards of $50,000 – who besides themselves, they wondered, would be interested in breathing electric life into old petrol models rusting away in garages and paddocks?

With more and more phone calls from do-it-yourselfers needing advice, they decided to post online about Mr Shepherd's first conversion, a 2001 Audi he completed in 2015 when he was working as an IT project manager.

Converting classics to electrics now accounts for about 30-40 per cent of the business and EA's crew of coders, high-voltage electricians and fabricators have seven vehicles finished or in the intricate process of conversion. 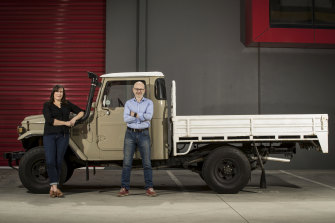 Emma Sutcliffe and EVolution Australia founder Russ Shepherd with a client’s 1979 Toyota landcruiser. They have been set the unique challenge of giving it a 500km battery range. Credit:Darrian Traynor

"I think it's more interesting to have something with a story behind it rather than something new," said Mr Shepherd, who takes particular pleasure in the contradiction of state-of-the art technology beneath worn and weathered panels.

"People love the look of classics, but they're often terrible to drive and not particularly safe. So it's not just about putting in a new motor, it's re-purposing, up-cycling, giving it a new lease on life – fundamentally, it's making them daily drivable."

One of the cars in the Clayton South shop is a 1963 EJ Holden wagon that Ms Sutcliffe bought out of a paddock for $6000. By the summer, she will be driving it every day to visit customers or to trade shows.

Another in the shed is a 1979 HJ47 Toyota Landcruiser, still in good condition, owned by Perth-based client Chris Bausor, who is paying about $100,000 for the conversion.

Much of that price is down to a unique challenge he set EVolution Australia: instead of the standard 300 kilometre range, Mr Bausor, a keen off-roader, wants 500 kilometres.

"I just love the body, the shape – everything about that era of Landcruiser, whether it's a ute or troop carrier – they are an absolute work of art," Ms Bausor said.

"I was looking at recommissioning the diesel engine and taking it around Australia. Then I came across the EV guys and I started looking into it more and more and it just looked like a fun solution."

When he moves back to Melbourne early next year, Mr Bausor hopes to rent it to other enthusiasts on the weekends he is not using it for himself.

While the new 2.5 cent per kilometre tax announced in the Victorian state budget last week was an industry-wide blow, Ms Sutcliffe said there was no stopping the rise of electric vehicles.

"The writing’s on the wall with this stuff but there are still petrol vehicles being made and sold to the Australian market," she said.

"So we're going to see this group of vehicles in Australia that essentially no one's going to want to buy. I don’t know when that point is going to be, but I think probably 2022-23."

She said EVolution Australia was now focused on lowering costs and time frames so that everyday Australians with more common cars could ultimately save money by choosing a conversion over a new electric model.

"Toyota Corollas, for example, can we get it to $5000 and where it takes a day to do and gives you a similar range to a petrol vehicle," she said.