Revealed: The top 10 UK towns and cities where you face greatest mugging threat when using an ATM

An historic Suffolk market town was today revealed to be the most dangerous place in Britain to take out cash.

Bury St Edmunds has experienced the most thefts and robberies near cashpoints per resident in the last decade – with one in every 415 suffering at the hands of thieves, research has found.

The figure, revealed in data obtained via freedom of information requests by MoneySuperMarket, is high compared to large cities such as Leeds (one in 5,143), Birmingham (one in 5,459) and even London (one in 6,340). 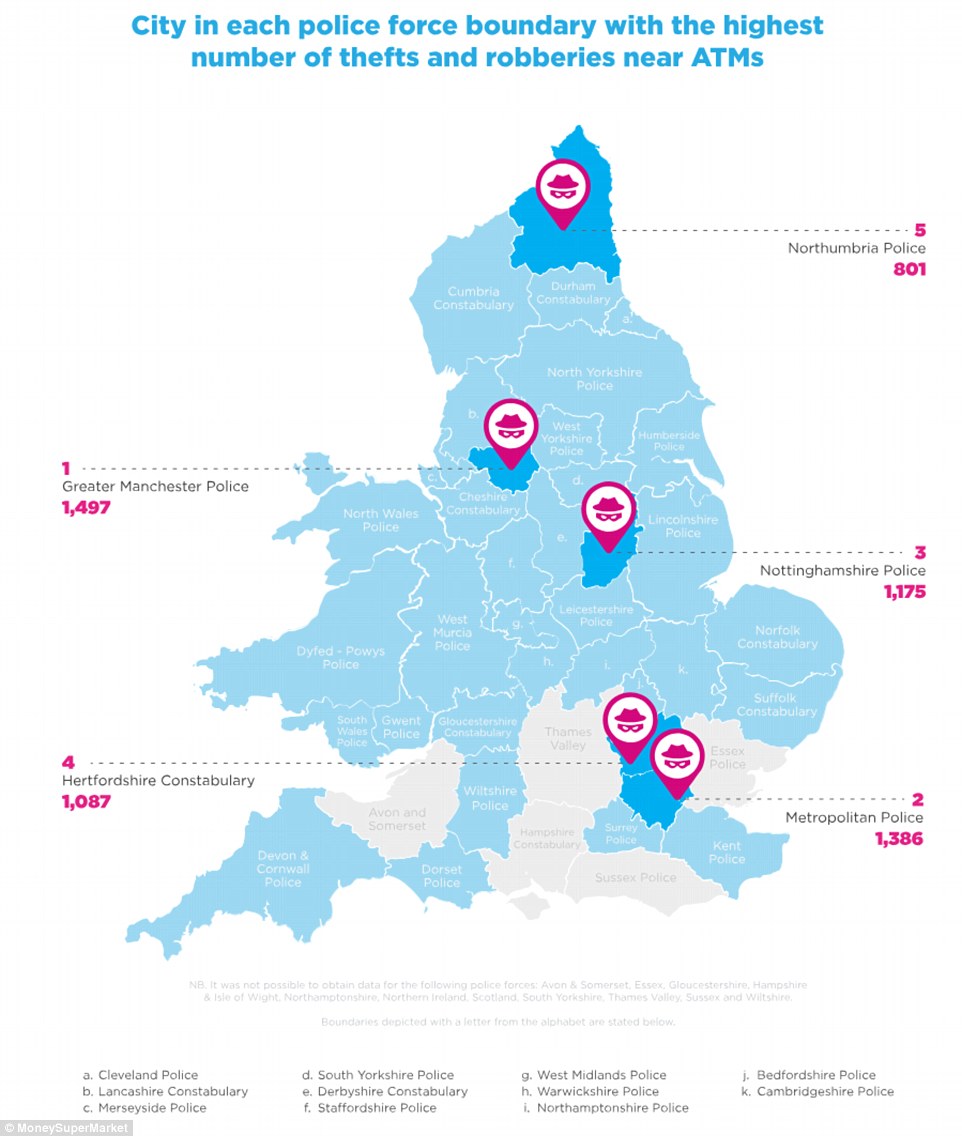 Greater Manchester Police have dealt with the largest number within their jurisdiction since 2007 – totalling 1,497. London’s Scotland Yard came second (1,386), with Nottinghamshire (1,175) and Hertfordshire (1,087) in third and fourth respectively 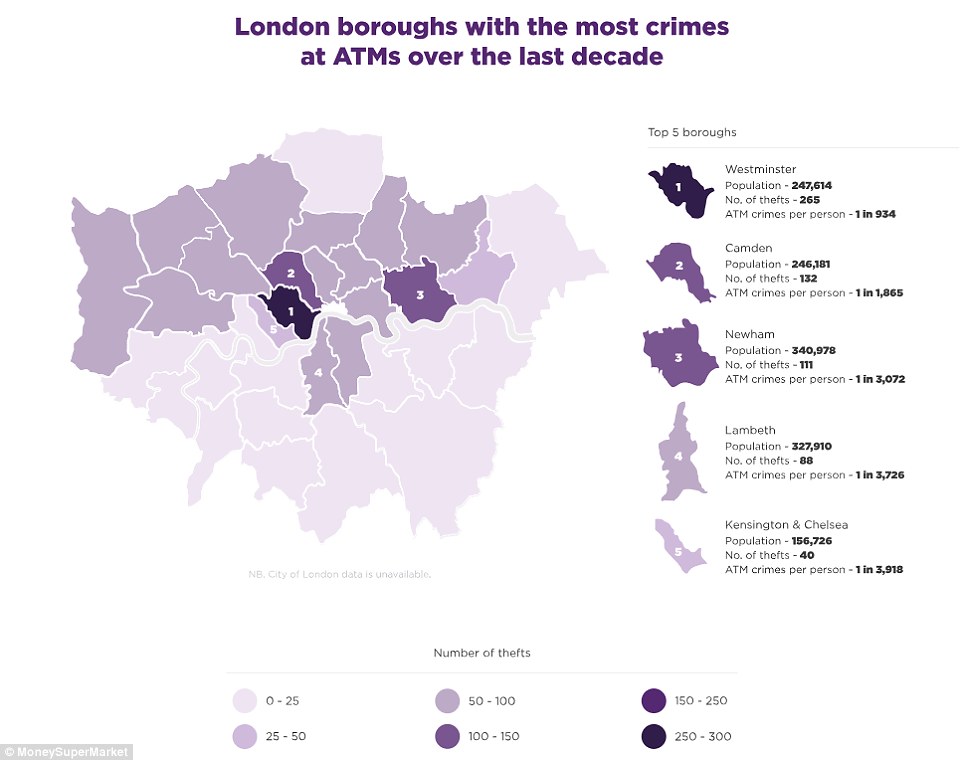 The City of Westminster tops the list for cash machine thefts across London boroughs, followed by Camden and Newham 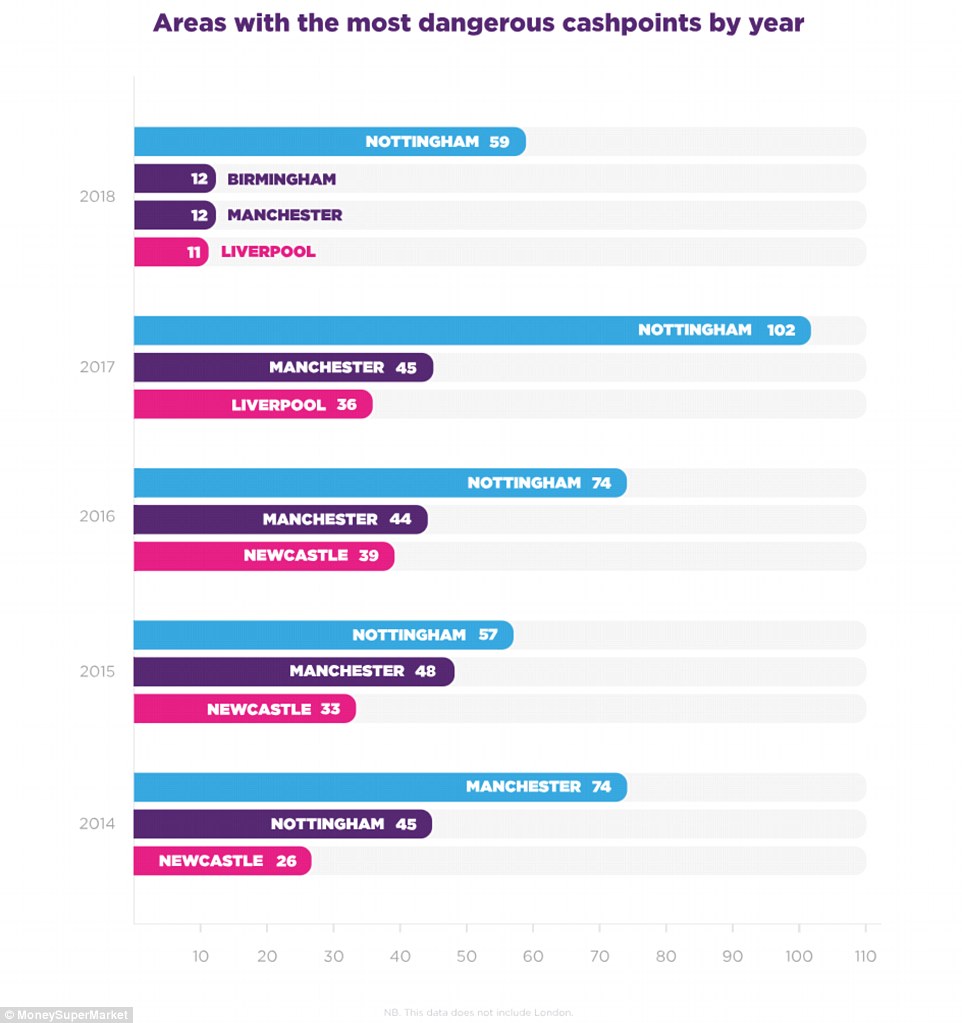 Nottingham has had one in 542 thefts or robberies at ATMs per resident, the data compiled by MoneySuperMarket found

The figures also brought out the news that Liverpool has seen a 260 per cent increase in thefts and robberies near ATMs, followed by Leeds (200 per cent) and Leicester (117 per cent) – compared to London, with only 58 per cent.

The City of Westminster tops the list for cash machine thefts across London boroughs, while the average percentage increase in thefts and robberies near cashpoints among the UK’s largest cities is 24 per cent.

The study also found that the rate of theft and robberies near ATMs is on the rise, and that Greater Manchester Police have dealt with the largest number within their jurisdiction since 2007 – totalling 1,497. 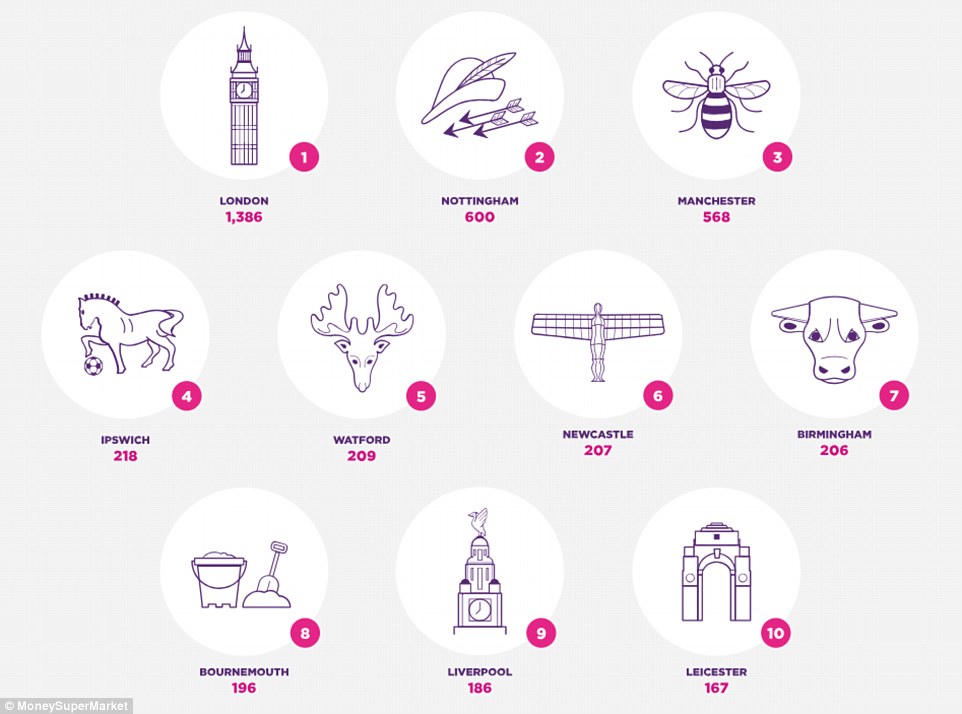 The top ten large towns and cities across Britain with the most dangerous cashpoint locations, as revealed in the survey

Know who’s around: Check no one is looking over your shoulder and cover the keypad when entering your PIN

Secure your cash: Ensure you’ve secured the money you have withdrawn in your wallet, purse or bag, zipped up

Small town risks: Don’t assume that because you’re not in a major city there’s no risk when taking cash out

Hidden traps: Look out for cameras installed on the cashpoint, or anything else that seems suspicious

Block stolen cards:  If your bank card is stolen, call the police and block the card so no money can be spent

Kevin Pratt, consumer affairs expert at MoneySuperMarket, said: ‘Cash is still king as far as many criminals are concerned, and ATMs are their ideal hunting ground.

‘This police data highlights the importance of being vigilant and cautious when using an ATM, even in a quiet market town where you might not expect to encounter a problem.

‘The rise of contactless payments via credit and debit cards and electronic devices means ATM usage generally is falling, which is why we’re hearing about dozens being closed each month.

‘But our research suggests Brits typically make 1.5 cash payments a day each, so ATMs will continue to play an important part in British life for the foreseeable future – and the crime associated with them is likely to continue.

‘If someone robs your cash or steals your card, you should immediately report it to the police. Report a stolen credit or debit card and cancel it immediately, and keep an eye out for fraudulent transactions on your account.’ 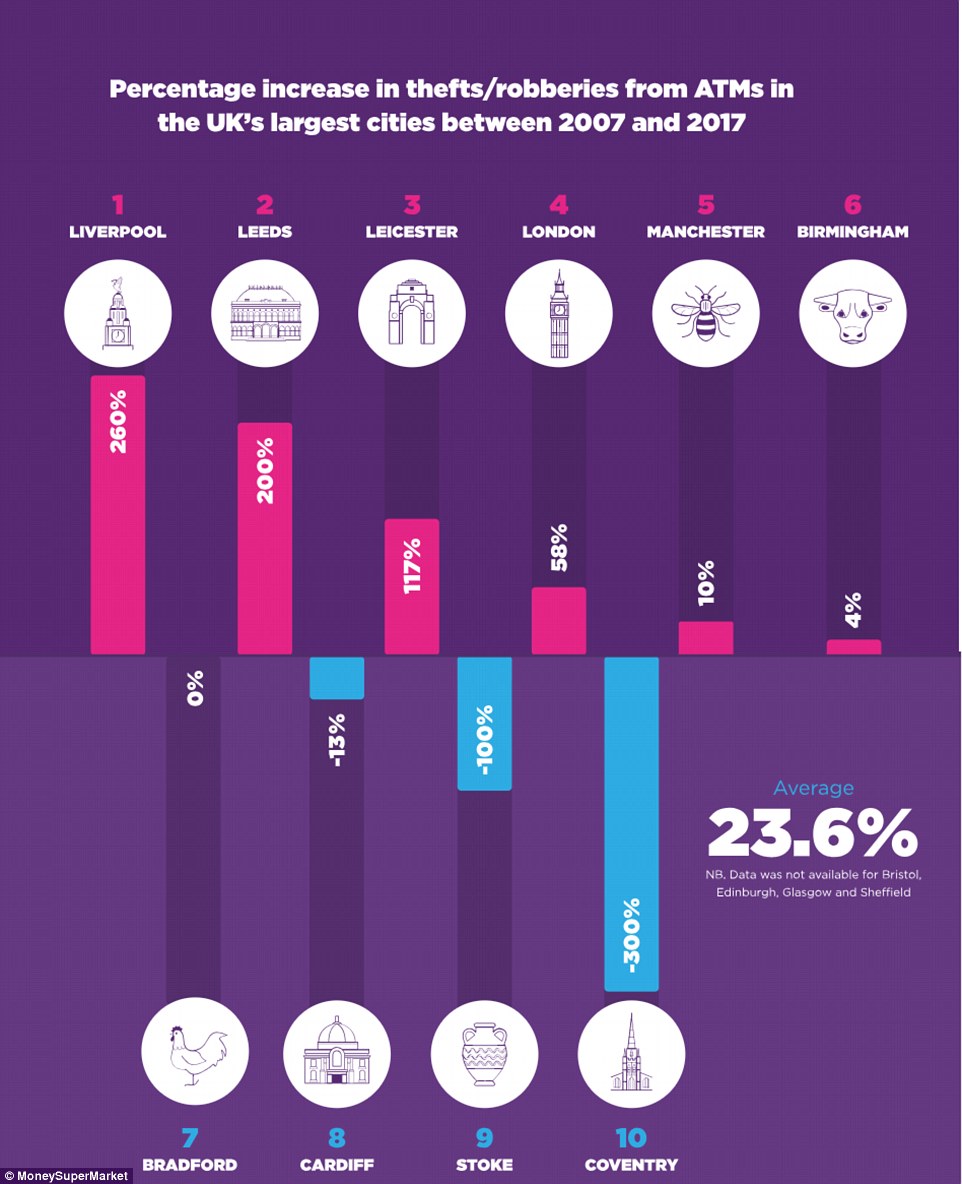 The figures also brought out the news that Liverpool has seen a 260 per cent increase in thefts and robberies near ATMs, followed by Leeds (200 per cent) and Leicester (117 per cent) – compared to London, with only 58 per cent 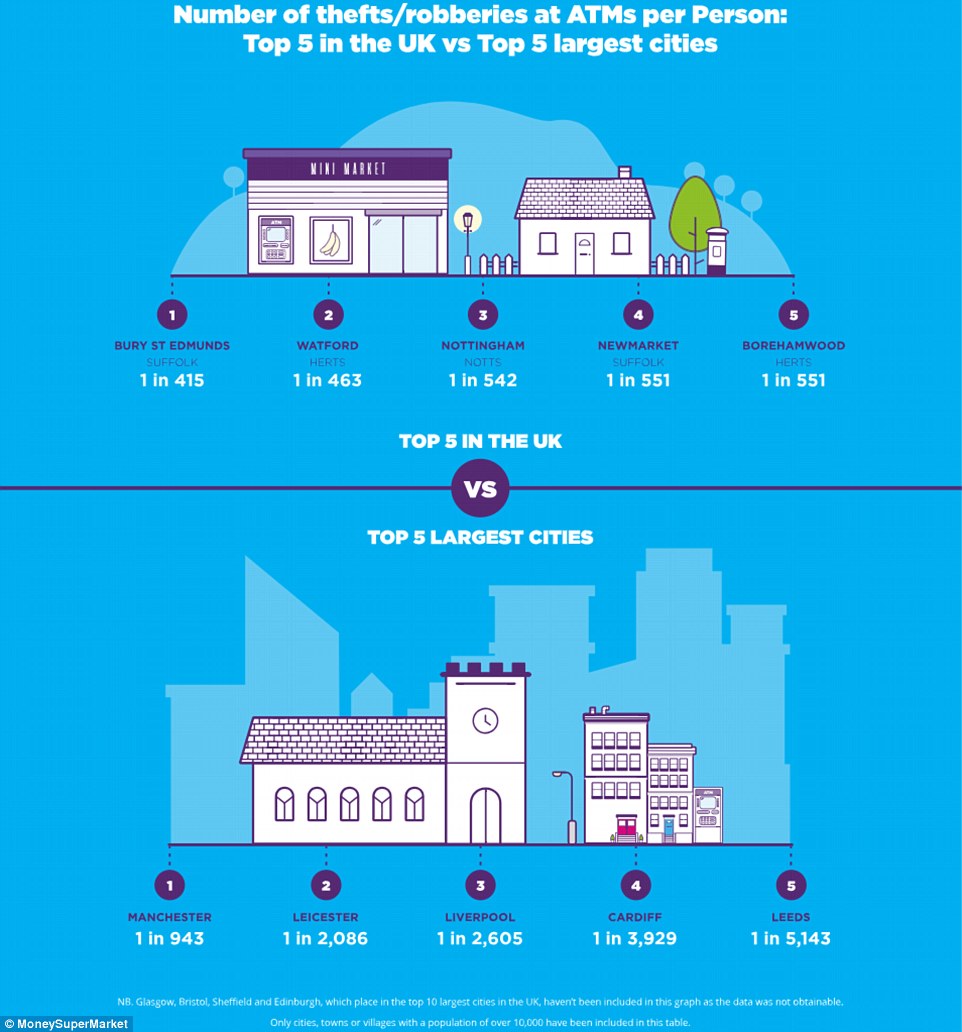 Bury St Edmunds in Suffolk has seen one in every 415 of its residents suffering at the hands of ATM thieves, the study found 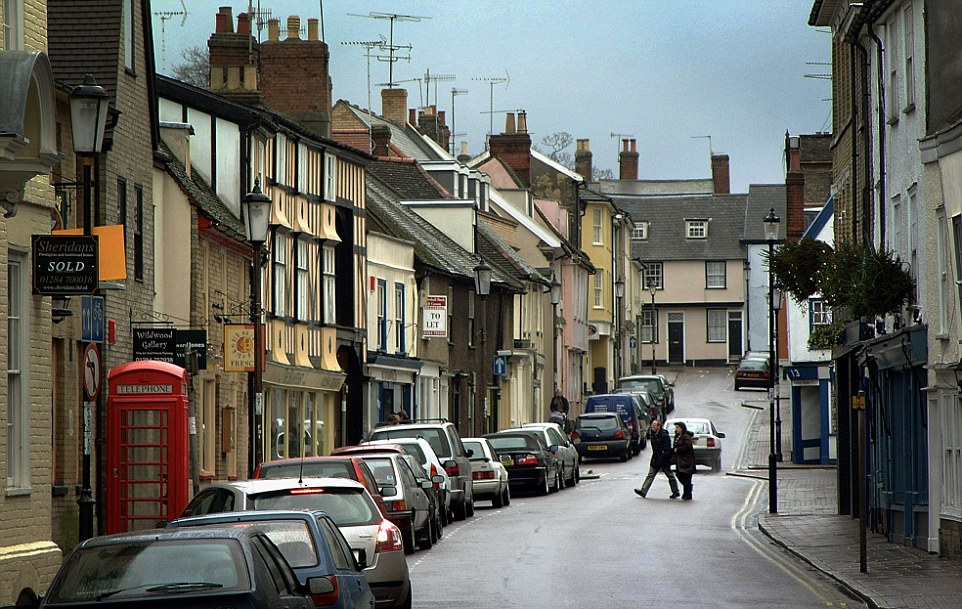 Four years ago there was a spike in cash machine thefts thanks to criminal gangs from Eastern Europe, with police intelligence suggesting more than 90 per cent of the crimes were linked to Romanian immigrants.

Gang members were using distraction techniques, with the thieves often crowding round ATMs and reading PIN numbers before stealing the card. They are then able to drain the victim’s account.

As the number of these distraction thefts has soared over the past decade, thieves have started deploying the scam in shops, railway stations and cafes.

Other thieves use more sophisticated ATM scams – such as fitting the cash machine with a ‘skimming’ device which will make a copy of the card’s details.