Britain's retail figures soar by 0.7% thanks to world cup - WSBuzz.com
Skip to content

Britain’s retail figures soar by 0.7% as the summer heatwave and the World Cup fuel a shopping boom, new figures reveal

Britain enjoyed a shopping boom last month as the heatwave and the closing stages of the World Cup saw retail figures grow, figures out today reveal.

The Office for National Statistics said that sales grew by 0.7 per cent in July – up dramatically on the 0.5 per cent fall the month before.

And the numbers are also up on last year, with numbers showing that year on year sales grew by 3.5 per cent – up on the 1.1 per cent the year before.

The growth was fuelled by big sales on food and drink as England fans stocked up on beer to enjoy while watching the closing stages of the World Cup.

And more people than ever before are going online to buy things, the month;y figures reveal.

Nearly a fifth (18.2 per cent) of spending was online in July this year, and big department  stores  are leading this growth accounting for a record proportion at 18.2 per cent.

The surge in online sales was partly down to lots of website only promotions, the ONS said. 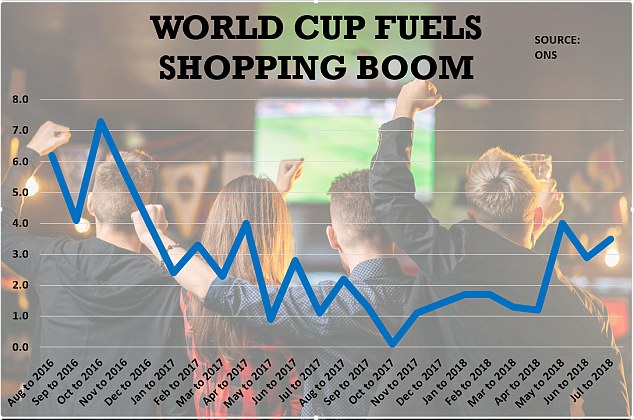 The Office for National Statistics said that sales grew by 0.7 per cent in July – up dramatically on the 0.5 per cent fall the month before.

‘Food sales remained robust as people continued to enjoy the World Cup and the sunshine.’

The  numbers come despite a bloodbath on the hihg street in recent months with ma ny of the UK’s best known shops being foreced to close their stores.

House of Fraser announced last week that it was going into administration – but was rescued at the last minute by Sports Direct owner Mike Ashley who has bought many of the stores.

But many other big names, including Mothercare, Carpetright and Maplin have been forced to close their shops amid falling sales.

Today’s figures show that the climate will continue to be tough for traditional high street retailers as more people go online to shop. 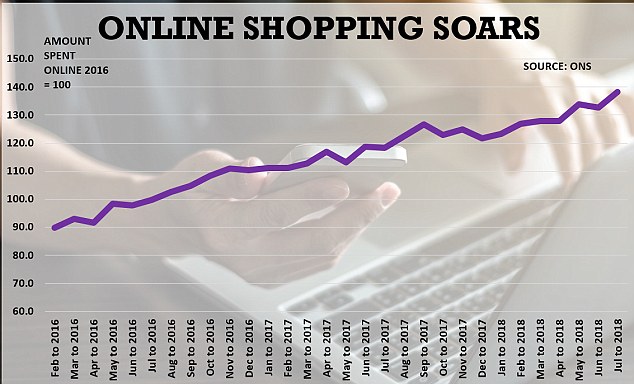 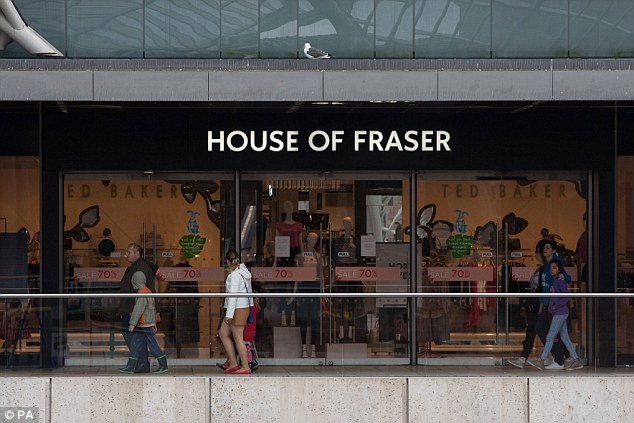 Many of Britain’s biggest high street names have had tos hut their doors this year. House of Fraser (pictured) announced last week that it was going into administration – but was rescued at the last minute by Sports Direct owner Mike Ashley who has bought many of the stores

Ministers have come under growing pressure to wake up to this change in shopping habits and tax big online retailers more.

and Chancellor Philip Hammond last week indicated that he could draw up egislation to impose an ‘Amazon tax’ in the UK.

Under current rules big international internet giants like amazon pay tax on twhere they bank their profoits – not on the scale of sales thyegy make in a certain country.

This means they can move their money around so they pay very little tax in the UK depsite soaring sales whih are squeezing out many high street shops.

Mr Hammond last week indicated that he could change the tax laws  so that they would have to pay tax according to their sales.

The move would mean the Treasury would get far more money and end criticisms that big internet firms are escaping with tiny tax bills.

Which high street retailers have closed shops in 2018? 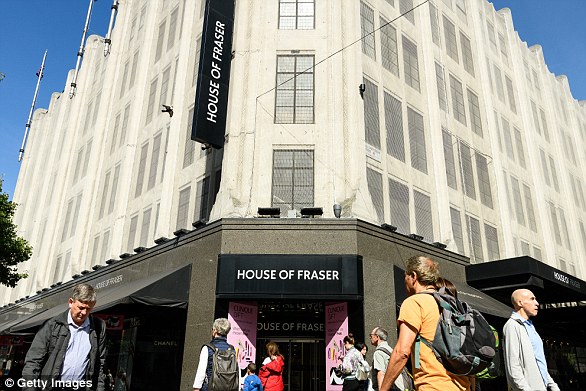 HOF: The department store chain is closing 31 of its outlets putting 6,000 jobs at risk

The year has seen a bloodbath of Britain’s high streets – with many of the nation’s retailers shutting stores and axing jobs.

The carpet retailer is closing 92 stores across the UK.

These closures represent nearly a quarter of all UK Carpetright stores.

The UK’s largest toy shop went into administration in February 201, leading to an estimated 2,000 redundancies.

The department store chain is closing 31 of its outlets putting 6,000 jobs at risk

The electronics giant has gone bust, closing shops across the country and putting thousands of jobs at risk.

The baby and toddler chain is closing 60 shops across the UK putting up to 900 jobs at risk.

Poundworld announced it was going into administration on June 11 after talks with potential buyer R Capital broke down, putting 5,100 jobs at risk.