British author Sir V.S. Naipaul who was awarded the Nobel Prize for Literature in 2001 dies aged 85

Naipaul ‘died peacefully surrounded by those he loved’ at his home in London, his wife, Lady Nadira Naipaul, said in a statement.

‘He was a giant in all that he achieved and he died peacefully surrounded by those he loved having lived a life which was full of wonderful creativity and endeavour,’ she said.

The author, who had written more than thirty books, was awarded the Nobel Prize for Literature in 2001 for ‘having united perceptive narrative and incorruptible scrutiny in works that compel us to see the presence of suppressed histories’. 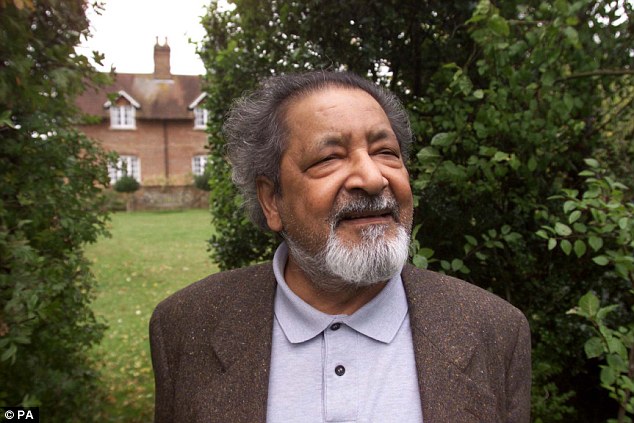 Other honours awarded to him throughout his life included the Booker Prize in 1971, the David Cohen Literature Prize in 1993 and a knighthood in 1990.

His 1961 novel, A House for Mr Biswas, is regarded by many critics as one of his most seminal works.

The book was based on the life of his father Seepersad, who was a reporter for the Trinidad Guardian.

Vidiadhar Surajprasad was born in Chaguanas, Trinidad and aged six his family moved to the country’s capital, Port of Spain.

It would later become the setting for his first novel, written in 1959 and titled Miguel Street.

In 1948 he won a government scholarship to read English at Oxford’s University College, where he suffered a nervous breakdown.

He married Patricia Hale, whom he met at Oxford in 1955.

She died in 1996 and he went on to marry Lady Nadira, who was some 20 years his junior, shortly afterwards.

Throughout his career he was outspoken, notably criticising Tony Blair as well as the famous novel of E.M. Forster, A Passage To India.

He also notoriously fell out with author Paul Theroux, whom he had mentored, but the pair later reunited and resolved their differences.

Among his other well-known works were those on Islamic fundamentalism – the 1981 work Among The Believers and the 1998 book Beyond Belief.