British holidaymakers will have to wear facemasks on the beach if they are looking to head to a Spanish shore this summer.

The Spanish government issued a directive on Tuesday tightening up the use of face coverings.

Masks will become obligatory in public at all times, even on the beach when people are sunbathing and social distancing.

The new diktat is expected to remove powers from regional authorities to exempt sun seekers from taking facemasks off even when they are lying on their towels.

It remains to be seen how police will enforce the rules to enable tourists to go for a swim in the sea without leaving themselves open to a fine, although they are expected to adopt a common-sense approach where they see people heading for the water without a face covering on.

But the tightening of the rules will leave holidaymakers at risk of mask tan lines this summer in popular tourist areas like the Costa Blanca and Costa del Sol. 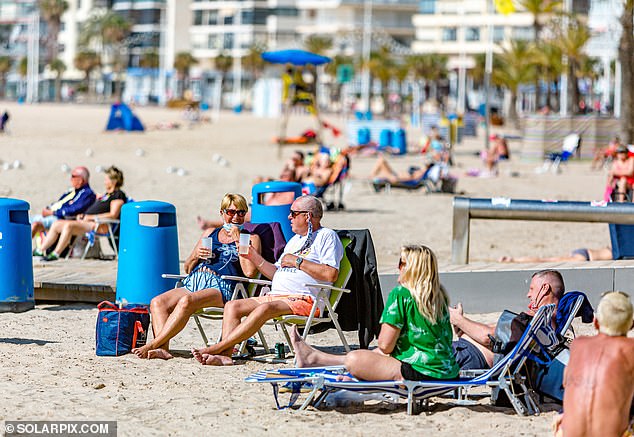 British holidaymakers will have to wear facemasks on the beach if they are looking to head to a Spanish beach this summer, the Spanish government said on Tuesday. Pictured: Expats and locals on the beach in Benidorm [File photo]

Only children under six and adults with illnesses that could cause breathing difficulties will be exempted from wearing face masks in public at all times.

People doing individual sport outdoors will also be exempt, although regional communities are expected to maintain the right to make masks compulsory for the likes of runners and cyclists if they see fit.

Balearic Islands governors, responsible for Majorca and Ibiza, were among those who exempted beachgoers from wearing face masks last summer, though social distancing measures were in place.

However, the new decree from the central government, issued in an official state bulletin, makes masks obligatory at all times in public even when people are five feet apart.

Spain reported 1,5501 new cases and 989 deaths on Tuesday. The country is among the hardest-hit in Europe, having recorded 3.27million cases and 75,199 deaths since the pandemic began last year.

British Health Secretary Matt Hancock gave hope to those hoping for holidays abroad this summer by insisting on Monday that the door ‘was not shut.’

He told ITV’s This Morning that more will be known from government scientists in the next few weeks regarding whether it will be safe for Brits to travel abroad for holidays.

‘We’re not yet sure, but we’re doing the science in Porton Down, and watching very closely, and if that all goes well, then we haven’t got a problem and then we’ll be much more relaxed about international travel.

‘We will know more over the next few weeks.’

Public Health England’s lab in Porton Down is trying to determine whether current vaccines are less effective against variants of coronavirus such as those found in South Africa, Brazil and Kent.

Mr Hancock said: ‘The door is not shut on foreign holidays this summer, it’s just too early to say.’