Over 60% of Britons are baffled by these nine common recycling symbols found on supermarket items – so how many do YOU know?

More than half of Britons are baffled by basic recycling symbols found on everyday products, a survey has found.

A poll of supermarket shoppers suggests 61 per cent of people do not know what nine of the most widely used symbols of item packaging stand for.

This includes the internationally-recognised ‘Tidy Man’ icon of a figure throwing litter into a bin.

The symbol was first used in the UK during the Keep Britain Tidy campaign in the late 1960s, but one quarter of respondents did not know what it meant.

SaveOnEnergy.com surveyed 2,300 British shoppers for the poll on the most common symbols found on items. 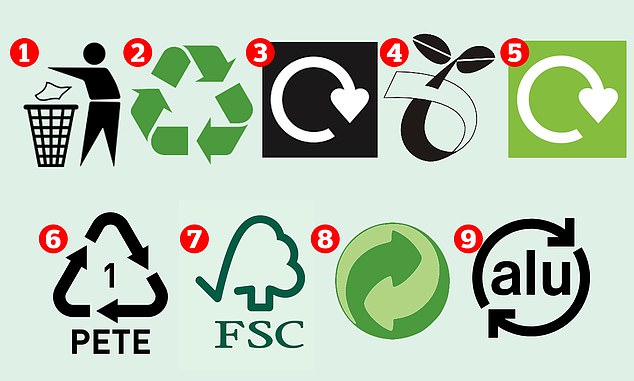 A poll of supermarket shoppers found 61 per cent of people do not know what nine of the most widely used symbols of item packaging stand for. Can you identify all nine? Answers at the bottom of this article

Respondents struggled most with the ‘alu’ symbol, with 88 per cent failing to say the icon with two circular arrows around the letters ‘alu’ means the product was made of recyclable aluminium.

Eighty-three per cent also did not recognise a wavy green arrow symbol which indicates the manufacturers of products have made a financial contribution towards the recycling of packaging.

Triangle-shaped symbols that show what type of plastic a product is made from were not understood by 79 per cent of those polled while the same number of people did not realise that the letters FSC, standing for Forest Stewardship Council, meant responsibly sourced wood had been used.

Participants were also timed on how long it took them to find the meaning of symbols, with shoppers taking an average of one minute and 43 seconds to look for the symbol on the packaging and searching for it online before giving up. 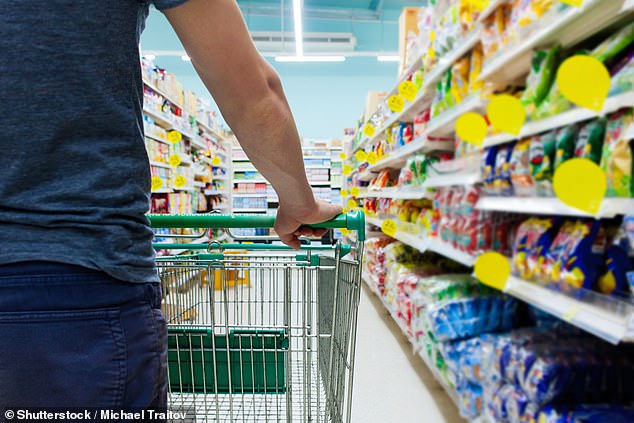 SaveOnEnergy.com surveyed 2,300 British shoppers for the poll on the most common symbols found on items

But with those who persisted until they found the correct way to recycle, they took an average of two minutes and 37 seconds.

Linda Dodge of SaveonEnergy.com said: ‘It’s really fantastic how far we have come to help save the animals and our environment by minimalising the amount of plastic we use and waste.

‘Although there is still a long way to go, symbols are put on items so consumers know what to do with them.

‘However, it seems they may be adding to the confusion – with this study showing more than half of Brits don’t know what most of the signs stand for.

‘It would suggest we need to teach these symbols more widely in schools and workplaces for us all to live in a better and sustainable planet.’

How many symbols could you identify?

1. The ‘Tidy man’ – Reminder to properly dispose of waste in a bin.

2. Mobius loop – This means that products are capable of being recycled, but it does not mean it has been recycled before.

3. Check locally – This item is recycled by 20-75 per cent of local authorities in the UK, so you should check with your local council.

4. Compostable – Place this item in with your garden waste bin.

5. Widely recycled – This item is recycled by more than 75 per cent of local authorities. There may be conditions for it to be recycled, like rinsing the packaging out, or remove the sleeve or lid.

6. Plastics – This tells you what kind of plastic a product is made from, to help you understand how to recycle it. e.g. PET – short for Polyethylene Terephthalate. This is widely recycled.

7. Forest Stewardship Council – This product has been made from wood and sourced from a responsibly-managed forest.

9. Aluminium – This product is created from recyclable aluminium – this may be a drinks can, deodorant can, or foil.