Shoppers are stocking up on their Christmas staples amid fears of shortages this festive season due to the ongoing fuel and energy crises, new data has revealed.

Meanwhile, there was a five per cent year-on-year rise in toy sales over the past four weeks while gift wrapping products grew by 10 per cent over the same period.

It comes as a lack of HGV drivers and global supply chain issues have sparked fears of shortages in the run up to December 25.

Meanwhile parts of the UK are still grappling with the fuel crisis, with a third of retailers in the South East warning at the end of last week that they had either no or limited fuel supplies.

And industry experts – including steel and glassmakers – warned Sunday that factories are just ‘days away’ from having to close due to the spiralling price of wholesale gas.

The latest figures from Kantar suggest the fuel crisis has seen people travel less to the supermarket, opting to do their shopping online instead. 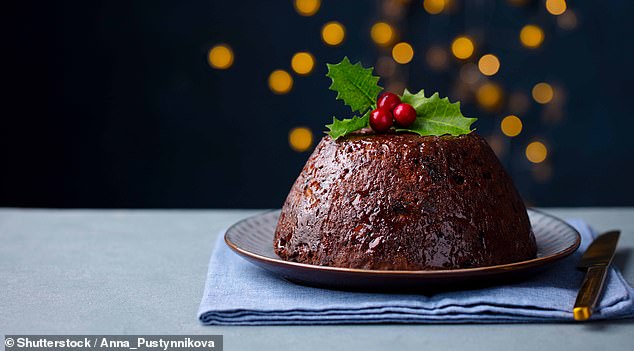 The average UK household made 15.5 grocery store visits in the past four weeks – the lowest monthly figure since February – while the proportion of groceries bought online was up 12.4% over the same period, compared with a 12.2% rise in September and following seven months of declines.

Shoppers also bought more during each store visit, with a 6% rise in trips where people spent more than £100.

It comes after a study by the Office for National Statistics (ONS) last week found that 17 per cent of adults discovered that the essential food items they wanted to purchase were unavailable, while almost a quarter found the same problem with non-essential food items.

As the combination of supply chain woes filtered through to supermarket shelves in September, shoppers were also dealing with price hikes. 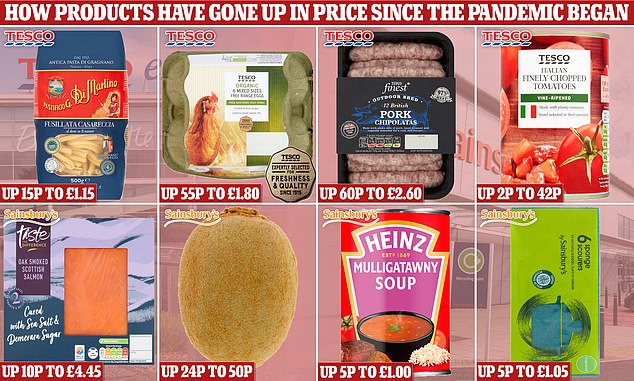 Figures from Kantar show like-for-like grocery prices were up 1.7% in the past four weeks.

Fraser McKevitt, head of retail and consumer insight at Kantar, said: ‘In real-world terms, the average household had to spend an extra £5.94 on groceries last month than they did at the same time last year.

‘The typical household spends £4,726 per year in the supermarkets, so any future price rises will quickly add up.

‘Shoppers will look to manage their spend by carefully selecting the products and retailers that offer them the best value.’

However he said the figures do not yet suggest a general pattern of panic buying.

‘These are still relatively small numbers and anxiety around supply issues has not translated to panic-buying – festive or otherwise,’ he said.

In the 12 weeks to October 3, overall grocery sales fell 1.2% to £28.8 billion year on year, although they remained 8.1% higher than before Covid-19, according to the figures. 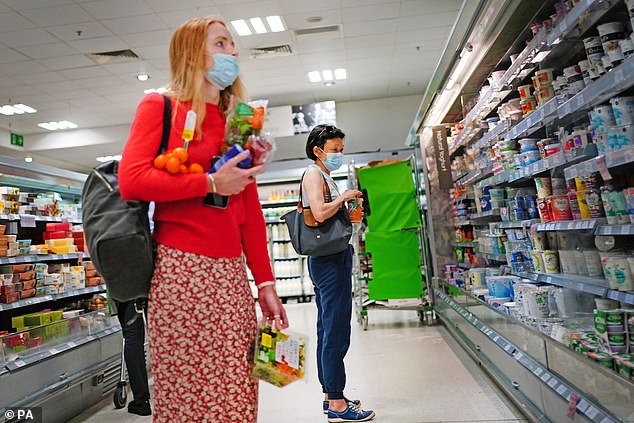 Figures from Kantar show like-for-like grocery prices were up 1.7% in the past four weeks

Last month saw the Army being roped in as soldiers were given specialist training so they could drive HGVs and help deliver petrol and diesel.

At the height of the fuel crisis on Friday September 24, the Kantar report showed that visits to forecourts in the South of England jumped by 66% as motorists queued to fill up their tanks ahead of the weekend.

The report also showed that as the private equity takeover battle for Morrisons reached fever pitch, the chain suffered a fall in market share to 9.8% in the 12 weeks to October 4, from 10.1% a year ago.

US private equity firm Clayton, Dubilier & Rice agreed a £7 billion takeover of the Bradford-based supermarket at the beginning of the month after a dramatic bidding auction.

Tesco was the only one of the major chains to report a rise in market share, increasing from 26.9% to 27.5% in the latest quarter, while Sainsbury’s and Asda held firm at 14.9% and 14.4% respectively.

Aside from Tesco, Lidl was the only other retailer to achieve growth in the quarter, with sales up 0.4% to give it a market share of 6.2%, which matched its previous record high in May 2021. 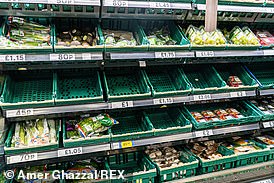 Figures released by the Office for National Statistics last week showed that about one in six adults in Britain were unable to buy essential food items in the previous fortnight, while 12 per cent of filling stations had run out of fuel in the South East and 17 per cent had only one grade of diesel or petrol.

It came as a survey of 1,000 people by retail magazine The Grocer suggested two-thirds were worried or very worried at the prospect of food and drink shortages over Christmas.

A number of companies have warned there may be shortages this winter, with Nestle saying it was facing challenges that could hit the availability of products including Quality Street chocolates while Walkers Shortbread in Scotland is facing difficulties due to a lack of staff.

Hundreds of thousands of shoppers have already booked their delivery slots for Christmas. British supermarket Waitrose, which is owned by John Lewis, said it saw 22,000 slots booked by lunchtime on the first day of releasing its dates last week.

Cabinet Ministers are now desperately seeking to allay mounting fears that staff shortages, soaring energy bills and global supply-chain woes will lead to panic-buying in the run-up to Christmas, with toys, clothes, chocolate and toilet rolls among products that could become more scarce within weeks as manufacturers wrestle with soaring costs.

Top Government figures have reportedly said that they are considering keeping soldiers on to drive HGV lorries over Christmas in a bid to prevent food shortages, as Britain is plagued by a series of crises, with soaring gas prices and HGV shortages causing chaos.

Education Secretary Nadhim Zahawi said last week that the fast-track scheme will be expanded to allow up to 5,000 people to be trained as HGV drivers. But with the free courses not starting until next month, they will do nothing to alleviate concerns about shortages this Christmas.

Labour’s Shadow Transport Secretary Jim McMahon thundered: ‘This is a drop in the ocean and it’s clear the Government is either unwilling or unable to grasp the scale of the challenge facing Christmas. The industry has warned that for Christmas food deliveries alone, an extra 15,000 drivers will be needed – not to mention the colossal gap ministers have already failed to plan for or properly address.

‘If the Prime Minister does not treat this crisis with the seriousness that is required and show real ambition in tackling it, working people will continue to pay the price with rising costs, rocketing energy bills and bare shelves this winter.’