This is the incredible moment two male lions attack a lone lioness to steal her food.

The lions sneak towards her while she continues to feast on the carcass in South Africa’s Kruger National Park.

But then they attack the lioness and shove her from the food before standing their ground to stop her from returning.

The two males use brute force to steal the remaining buffalo meat from a carcass from a starving lioness.

One tourist said: ‘The lioness looked in a real bad neglected state and she was starving.

‘The hungry lioness enjoyed her find for not even five minutes when we suddenly saw a big male lion on a hill in the distance. 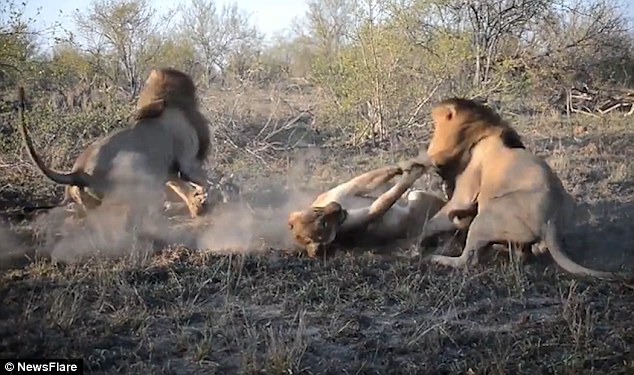 ‘He was staring straight at this female and soon started stalking her. The male lion sneaked up to the lioness and out of nowhere, he was joined by a second big male lion.

‘The lioness realized too late what was going on and was brutally attacked by both males for a brief moment. Pinning her down, both males bit into the lioness, making their intentions very clear while leaving her totally shocked and blown away.

The lioness stood no chance and quickly realized that it was better to move on while the two male lions claimed their prize.’

The lioness had no relation to the two males and were all purely fighting for means of survival. 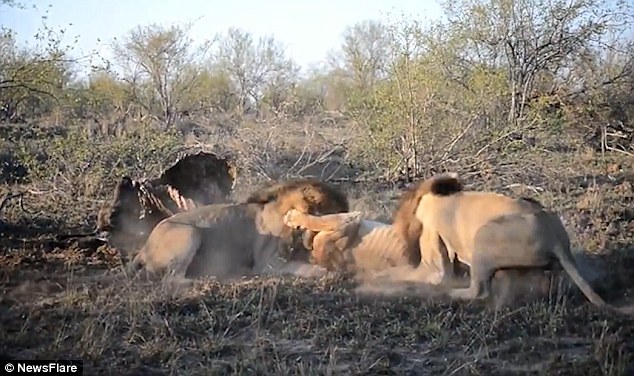