London: In the frantic minutes after police shot dead knife-wielding terrorist Sudesh Amman in a busy high street, an armed officer walked into a nearby cafe with a simple instruction. 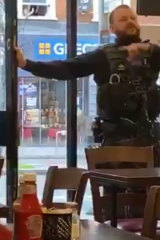 A police officer orders the evacuation of a cafe near the Streatham terrorist attack.Credit:Twitter

"Sorry guys, you're going to have to close and evacuate I'm afraid. There's been a terrorist incident down there," he said. "If you want to stay safe you'll listen to me."

An incredulous staff member replied: "Just give us half an hour? People have started to eat."

"Madam, a terrorist has been shot dead just down there," the officer responded. "They've got a possible IED vest of them, which is a bomb. If you want to try to stay open for half an hour and you want to put people's lives in danger, then be my guest. If not, please listen to me and please make your way out of the shop."

The reaction to such a dangerous situation neatly demonstrated an increasingly blasé attitude to terrorist attacks in Britain despite some seriously chilling statistics and emerging trends where violence is being carried out by convicted terrorists.

This latest incident, in which Amman was shot dead after stabbing two people in the southern residential suburb of Streatham, was the third terror attack in the United Kingdom in just two months. And the 10th in a little over three years. 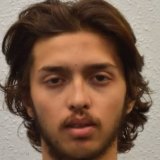 It is understood that the man police are investigating over the terror attack on Streatham High Street is Sudesh Amman.Credit:Source: Met Police

He pleaded guilty to six charges of possession and seven of disseminating terrorism material and was sentenced to three years and four months in prison.

What happened next? He was released early under the UK's controversial parole regime, and was only under surveillance at the time of Sunday's attack because police believed he still posed a threat to the public.

Some will see the surveillance as proof the system is working. But the general public should be appalled such a dangerous offender could be walking the streets when authorities were so worried about his intentions that they felt the need to launch a major undercover operation.

In late November, convicted terrorist Usman Khan unleashed a deadly rampage at a prisoner rehabilitation conference before being shot dead by police on London Bridge. And in early January, a guard at a high-security prison north of London had his neck and face slashed by inmates in what police later classified a terrorist attack. 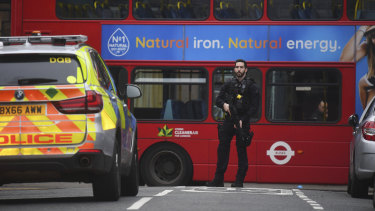 The incident on Sunday was the third terrorist attack in Britain in the past two months.Credit:PA

Sunday's incident will strengthen support for Prime Minister Boris Johnson's plan to crack down on convicted jihadists and deny them early release. However the Conservative Party has had a decade in government to get this right and have so far failed abysmally.

The three most-recent attacks now share the same striking connection: police and politicians knew the perpetrators were terrorists well before they unleashed their attacks. A complacent Britain should sit up, pay attention and demand answers.