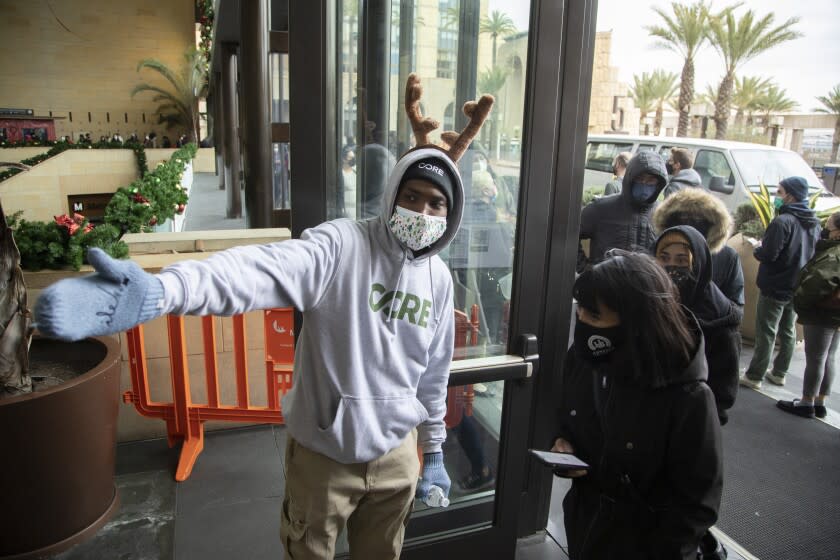 COVID-19 hospitalizations are rising rapidly in California, placing fresh strain on healthcare systems already worn thin by nearly two years on the frontlines of the pandemic.

Though the number of COVID-19 patients statewide remains far below the high marks seen during last winter's surge, the daily count has swelled — a likely byproduct of a new spike in coronavirus cases that officials say is being fueled by the heavily mutated Omicron variant.

California recorded 4,378 coronavirus-positive patients in its hospitals Monday, an increase of 377 from the day before. The number of Californians hospitalized with COVID-19 has swelled by nearly 25% in the last week.

It's unclear how many of the new hospitalizations are the work of Omicron, or whether the Delta variant is still responsible for most of them.

Though there are some data indicating that Omicron may cause less severe symptoms than Delta — long the dominant version of the coronavirus circulating in California — health officials have noted that a significant uptick in infections is still likely to send many new patients to the hospital.

"Our case rates are going up incredibly fast, and some proportion of people that get sick will require a hospital bed," Dr. Sara Cody, the Santa Clara County public health director and health officer, said during a news conference Tuesday.

"We are anticipating that our cases will exceed what they did last winter, so even a small proportion will have a significant impact on our hospitals, and that's what we are concerned about."

Overall, COVID-19 hospitalizations remain a relative fraction of what they were this time last year. On Dec. 27, 2020, there were 19,766 coronavirus-positive patients hospitalized statewide, one of the highest single-day totals of the entire pandemic.

But that likely is little comfort to healthcare workers who have long been treating those stricken by the virus.

During a briefing last week, L.A. County Public Health Director Barbara Ferrer said she wanted to "extend my heartfelt gratitude to all of our healthcare workers and our public health workers, who really can't believe that we're starting to see another huge, huge surge right around holiday time."

"I know that the frustration is very real because it just at this point seems endless, and because we have some tools that provide a lot of protection and lots of people aren't still using them," she said. "I think for those who are in charge of caring for us, the frustration can be overwhelming because, in general, our healthcare workers, our public health workers, are the most compassionate people in our county. They've dedicated themselves to caring for us when we're at our very worst. But we're asking a lot of them."

Data reporting was interrupted over the recent holiday weekend, making it difficult to discern the extent of the coronavirus spread in recent days.

But some health experts have said a wave of new cases is again washing over California. On Thursday, state health officials reported 20,401 new infections. From Friday to Sunday, a combined 86,634 were reported.

California is not alone in its uptick.

The Centers for Disease Control and Prevention reported Tuesday that the nationwide average number of daily cases over the last week has climbed to 206,000, exceeding the peak of about 160,000 during the summer Delta surge and coming closer to the all-time high of about 250,000 daily cases reported last winter.

Many have attributed the mushrooming case counts to the spread of the Omicron variant, which is possibly the most transmissible version of the coronavirus yet.

And according to data released last week by the California Department of Public Health, at least three California health systems have reported that Omicron appears to account for 50% to 70% of new cases — though officials stressed that full sequencing is still being done.

The variant's rapid rise is not unexpected. About two weeks ago, Cody warned of "a deluge of Omicron."

"Today, unfortunately, that deluge is here," she said. "Our cases here in Santa Clara County are spiking, and the vast majority of them are Omicron."

There's also growing evidence that Omicron presents an increased risk for patients to be reinfected with the virus, and that past infection alone, without vaccination and masking, is not enough to guarantee protection against another COVID-19 illness.

Officials are urging people to avoid large indoor gatherings and instead are encouraging New Year’s get-togethers that are indoors to be small.

Even with the emergence of Omicron, officials say the best way for residents to armor themselves against infection and serious illness is to get vaccinated and, if eligible, get a booster.

From Dec. 2-8 — the week after Omicron was first detected in the state — unvaccinated Californians were nearly eight times more likely to be infected than their fully vaccinated counterparts, state data show.

And over the weeklong period ending Dec. 11, unvaccinated people in L.A. County were 23 times more likely to be infected than vaccinated people who had received a booster shot, officials said.

"These greatly increased risks to unvaccinated people underpin all of our work to increase vaccination and boosters for every single resident," Ferrer said recently.

The CDC says that 85% of U.S. adults have received at least one dose of the COVID-19 vaccine, while 15% are unvaccinated. In California, about 95% of adults have gotten at least their first shot; 77% are considered fully vaccinated, the CDC said.

A newly released report from the U.S. Census Bureau sheds some light on the remaining holdouts.

Only 2% of respondents said it was hard to get the shot.