CALLS to boycott the MLB quickly followed after some San Francisco Giants players kneeled for the National Anthem and Donald Trump slammed them for showing "great disrespect."

Backlash comes after SF Giants manager Gabe Kapler and four of his players took a knee before a preseason game on Monday night in support of the Black Lives Matter movement. 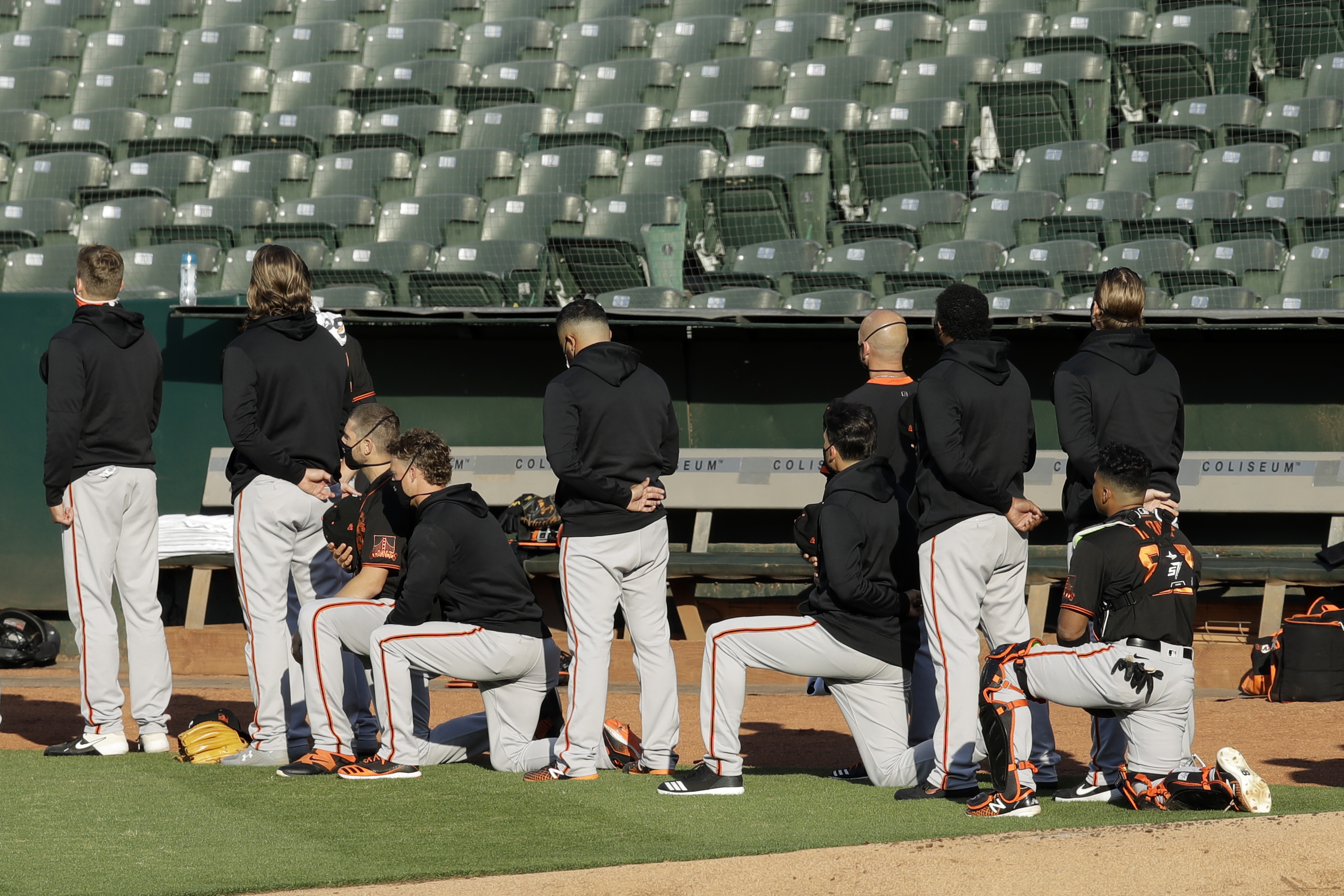 Major League Baseball shared a 13-second clip of Giants players kneeling as the national hymn is heard on the loud speaker in an empty stadium.

Along with the video, which has been viewed more than 1.8million times, the MLB tweeted "#BlackLivesMatter" and put a few BLM fist symbol emojis.

Clenched fists raised in the air are used at protests worldwide after the death of George Floyd in the United States.

Take a knee is a protest against the unfair treatment of Black Americans, which has been used at many American football games and started in 2016 with San Francisco 49ers’ black quarterback Colin Kaepernick.

Kapler, 44, and some players took a knee before the start of the team's preseason game against the Oakland A's on July 20.

Before the game, Kapler reportedly said: "I wanted them to know I wasn’t pleased how our country has handled police brutality.

"I told them I wanted to amplify their voices and amplify the voice of the Black community, and marginalized communities as well."

Prior to Monday night's protest, the only MLB player to take a knee in protest during the national anthem was Oakland Athletics catcher Bruce Maxwell.

In response to the players taking the controversial position, President Trump took to Twitter Tuesday morning to express his disapproval.

Trump wrote: "Looking forward to live sports, but any time I witness a player kneeling during the National Anthem, a sign of great disrespect for our Country and our Flag, the game is over for me!" 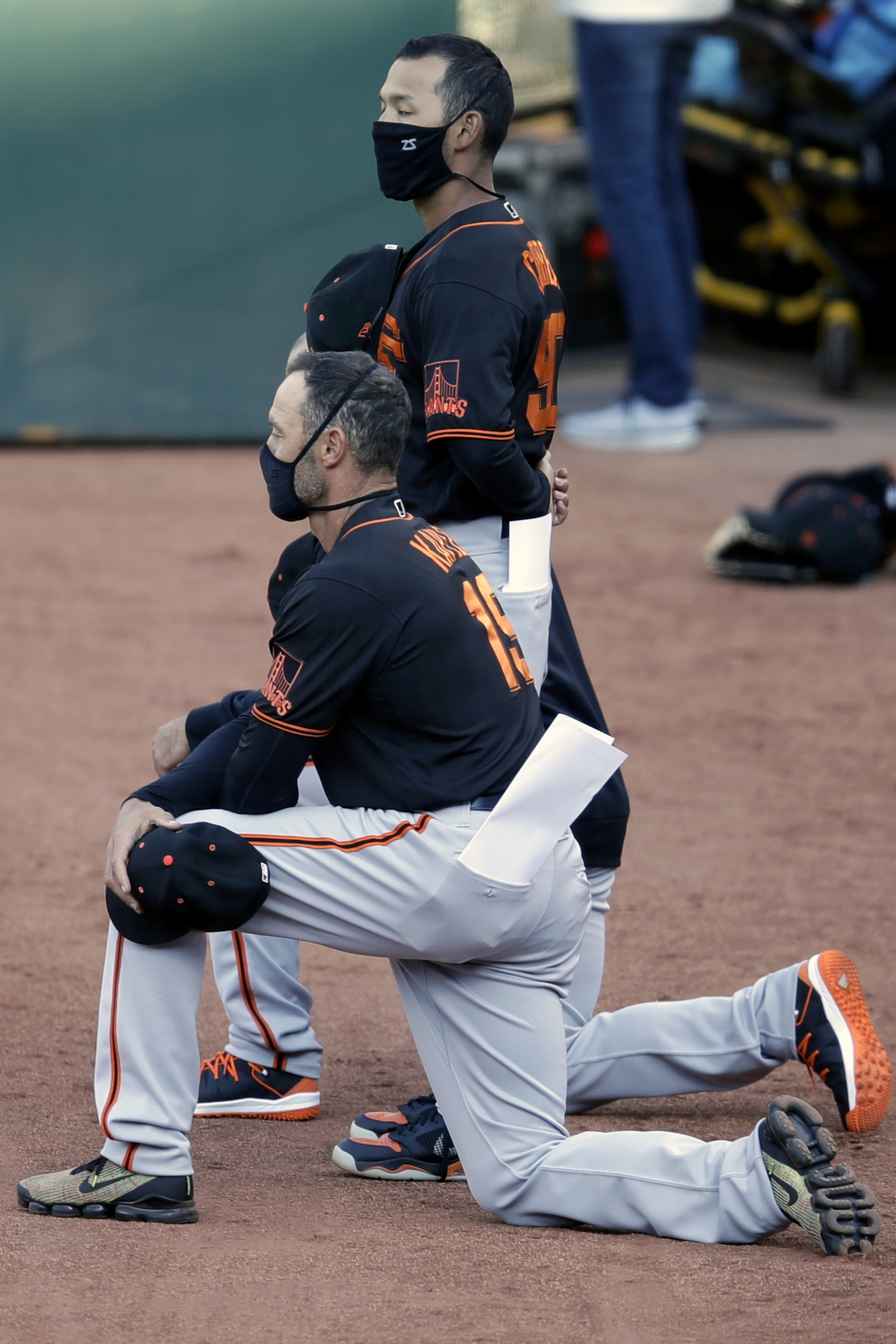 Hashtag BoycottMLB is now being used on social media, as some people don't support kneeling during the anthem.

Another person tweeted: "Taking a knee as it is done when America's unifying national anthem is played is wrong, not the way to protest, there are other peaceful means, and everyone on all sides here is forgetting one simple truth that has been around forever #BoycottMLB."

Twitter user Mike G said: "The national anthem is sang for our military not our law enforcement firstly. You kneel you're disrespecting your military.

"Yes black lives matter, kneeling for the national is showing complete lack of respect for out men and women fighting for your freedom."

His tweet prompted the MLB to defend themselves, saying: "It has never been about the military or the flag.

"The players and coaches are using their platforms to peacefully protest."

However, not everyone is against taking a knee.

One social media user tweeted: "For those planning to boycott the MLB – would you also kindly remove your name from the season ticket waiting list? I’d love to move up a few spots. Thanks! #BoycottMLB."

Farhan Zaidi, the president of baseball operations for the Giants, said the team is proud of the players' decision to kneel.

In a public statement, Zaidi said: "We're proud of our players and staff for continuing to participate in the national conversation about racial injustice.

"We support those who knelt to peacefully protest racial injustice and those who stood to express love of country.

"We do not see these as mutually exclusive sentiments and believe the freedom to express both is what our country is about."

He added: "As an organization, we reaffirm our denouncement of acts of discrimination and violence against members of the Black community and our pledge to work together with those who seek to end racial injustice in America."