The holiday’s over! Boris Johnsons’s fiancee Carrie Symonds dons a bobble hat to battle the chill British weather on her return from five-star Italian holiday at £600-a-night Lake Como hotel

Carrie Symonds has arrived back in chilly Britain after enjoying a luxury seaside retreat to Italy with baby Wilfred.

Boris Johnson’s fiancée battled the blustery weather in a red beanie hat as she left Downing Street by the back exit this afternoon.

The new mother strapped her four-month-old son into a government people carrier before being whisked on to the street in the direction of The Mall.

Earlier in the week MailOnline revealed Ms Symonds, 32, to be relaxing in the exclusive resort of Lake Como with three girlfriends at the £600-a-night Grand Hotel Tremezzo.

There, she was pictured strolling along the promenade with Wilfred and cruising around the coast on a boat trip.

But she returns to choppy political waters in Westminster as the Prime Minister faces a backbench revolt over the Government’s coronavirus emergency powers.

Carrie Symonds has arrived back in chilly England after enjoying a luxury seaside retreat to Italy with baby Wilfred. Boris Johnson’s fiancée battled the blustery weather in a red beanie hat as she left Downing Street by the back exit this afternoon 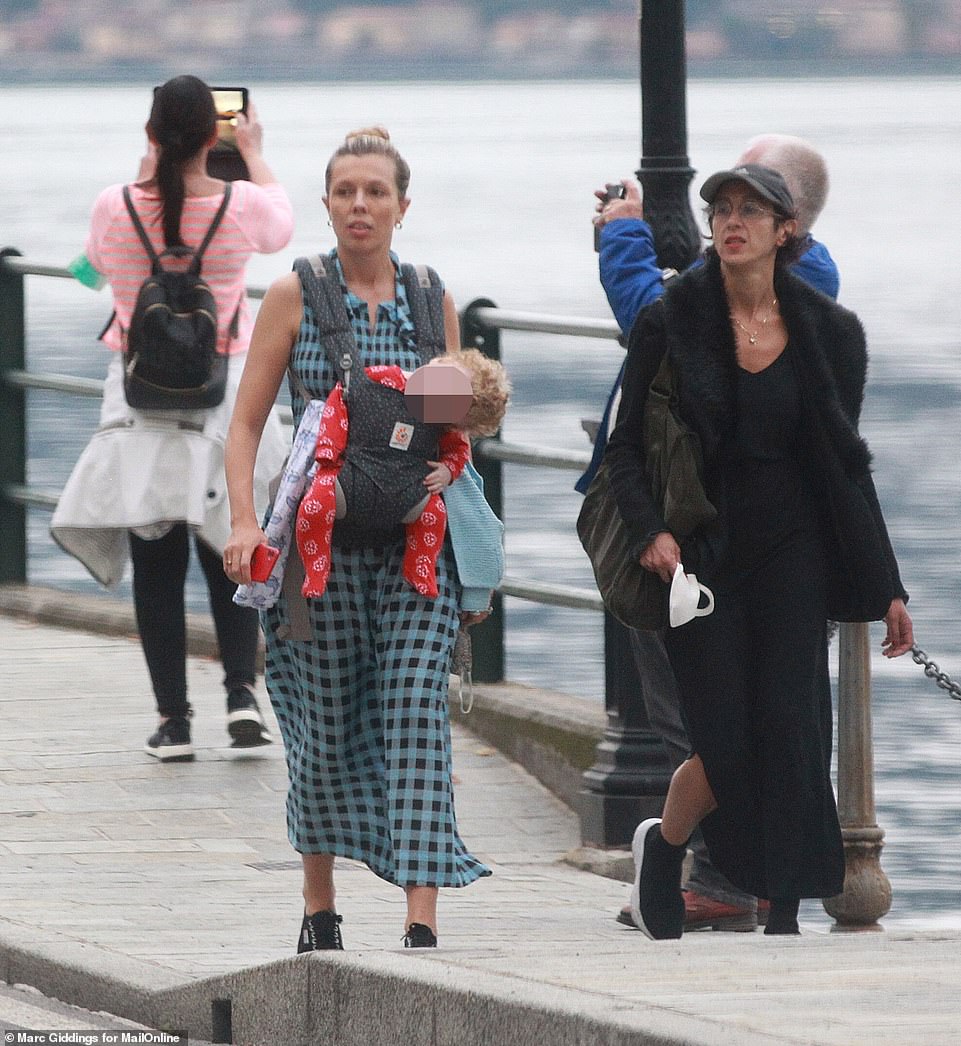 Carrie Symonds, 32, was seen strolling along a waterfront promenade with a friend while carrying son Wilfred in a baby sling

Slung around her shoulder was a black bag which she clutched with her right hand, partially revealing the jewel-encrusted engagement ring on her finger.

Downing Street’s first couple announced their engagement in February, but in the following months the country was plunged into lockdown and the PM endured his own Covid-19 fight.

During her luxury getaway the new mother was seen cutting a casual figure in a £325 blue checked cotton gingham dress by Ganni and black Superga trainers as she wandered along the waterside esplanade with a friend while carrying Wilfred in a baby sling.

A British holidaymaker told MailOnline: ‘Carrie seemed very relaxed. She was smiling and laughing with her friends. It was as if she didn’t have a care in the world.’

Mr Johnson’s fiancée didn’t appear to have any worries as she enjoyed her holiday at a hotel which is considered one of the finest in Europe, popular with wealthy Americans.

This was despite Mr Johnson’s grave warning to the nation in a televised address that he will impose more restrictions if the infection rate does not slow.

On Tuesday when the PM tightened the coronavirus laws around pubs – including a 10pm curfew which kicked in last night – Ms Symonds stayed up until well after 10pm as she ate at the hotel restaurant where Mediterranean-style sea bass with tomatoes, capers and Taggia olives costs £28. 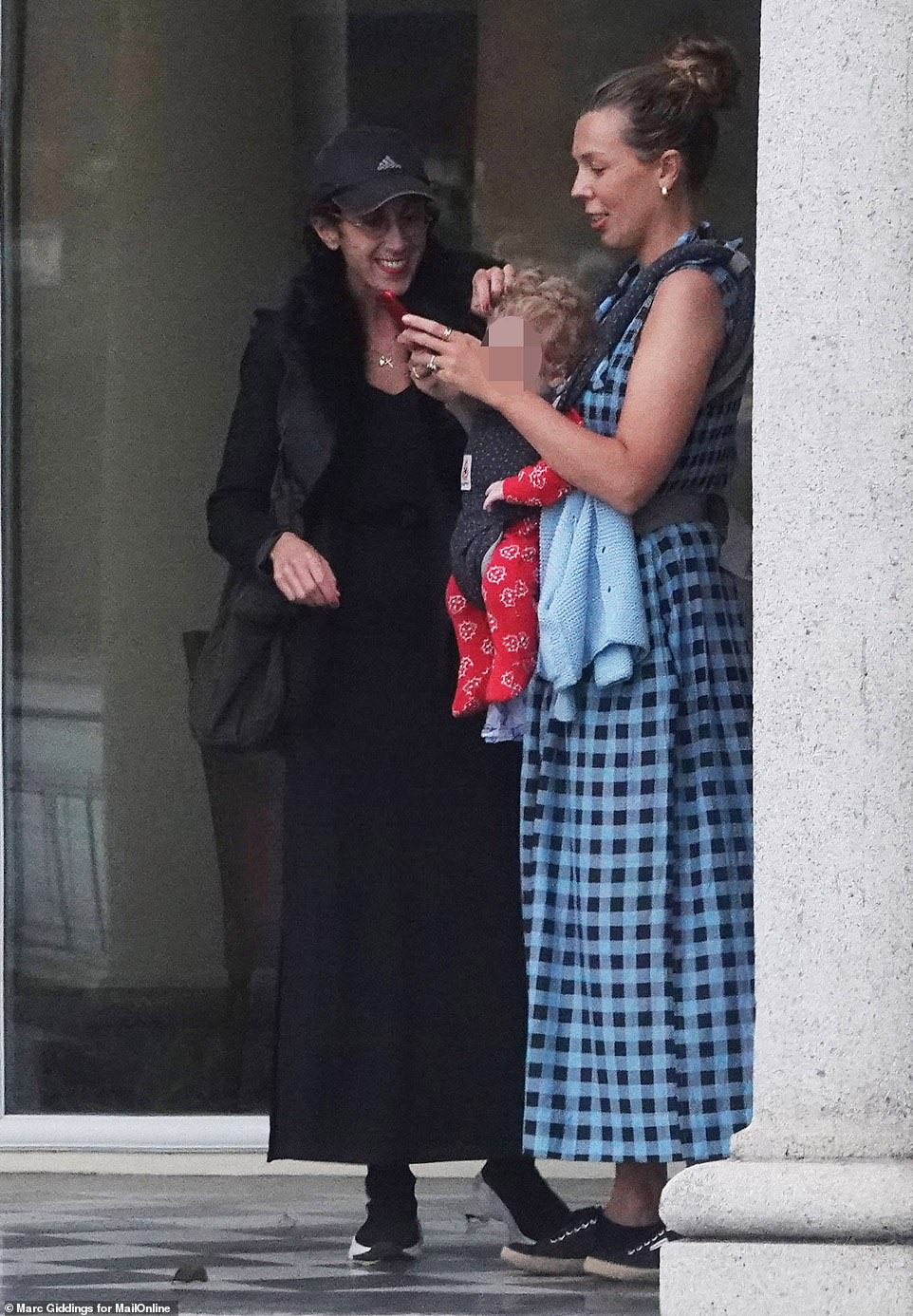 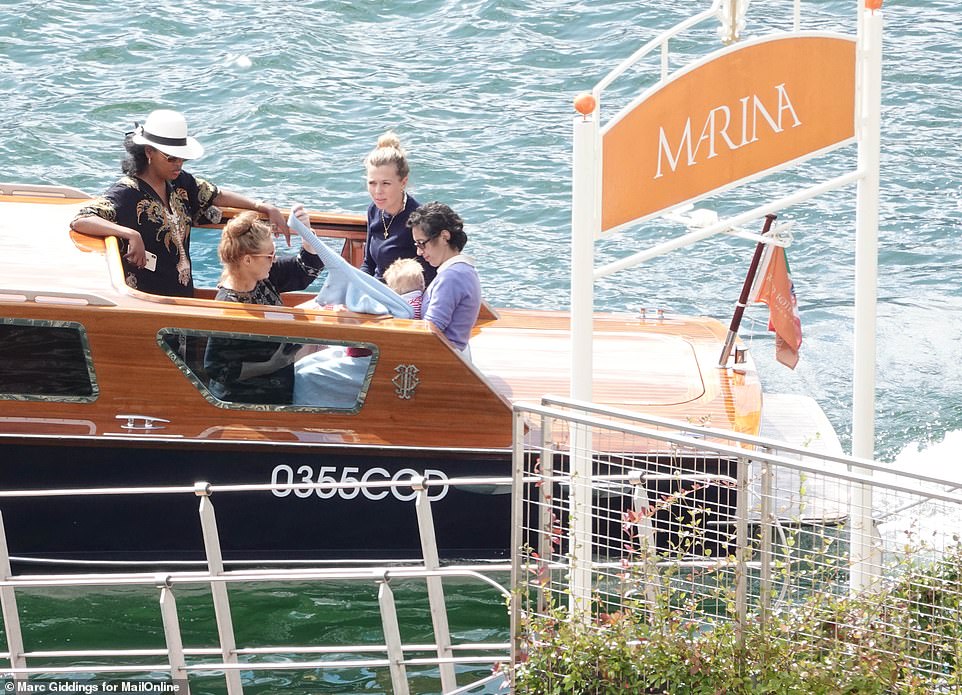 Carrie and her friends used the hotel’s £300-an-hour launch to see the various castles, stately homes and waterside villages that have made this Alpine location one of the world’s most prestigious holiday destinations

Carrie was seen wearing a £325 blue checked gingham dress, black canvas shoes, with her blonde hair tied up in a bun as she strolled with her son. After their stroll, the friends were seen enjoying a late night supper at an exclusive hotel 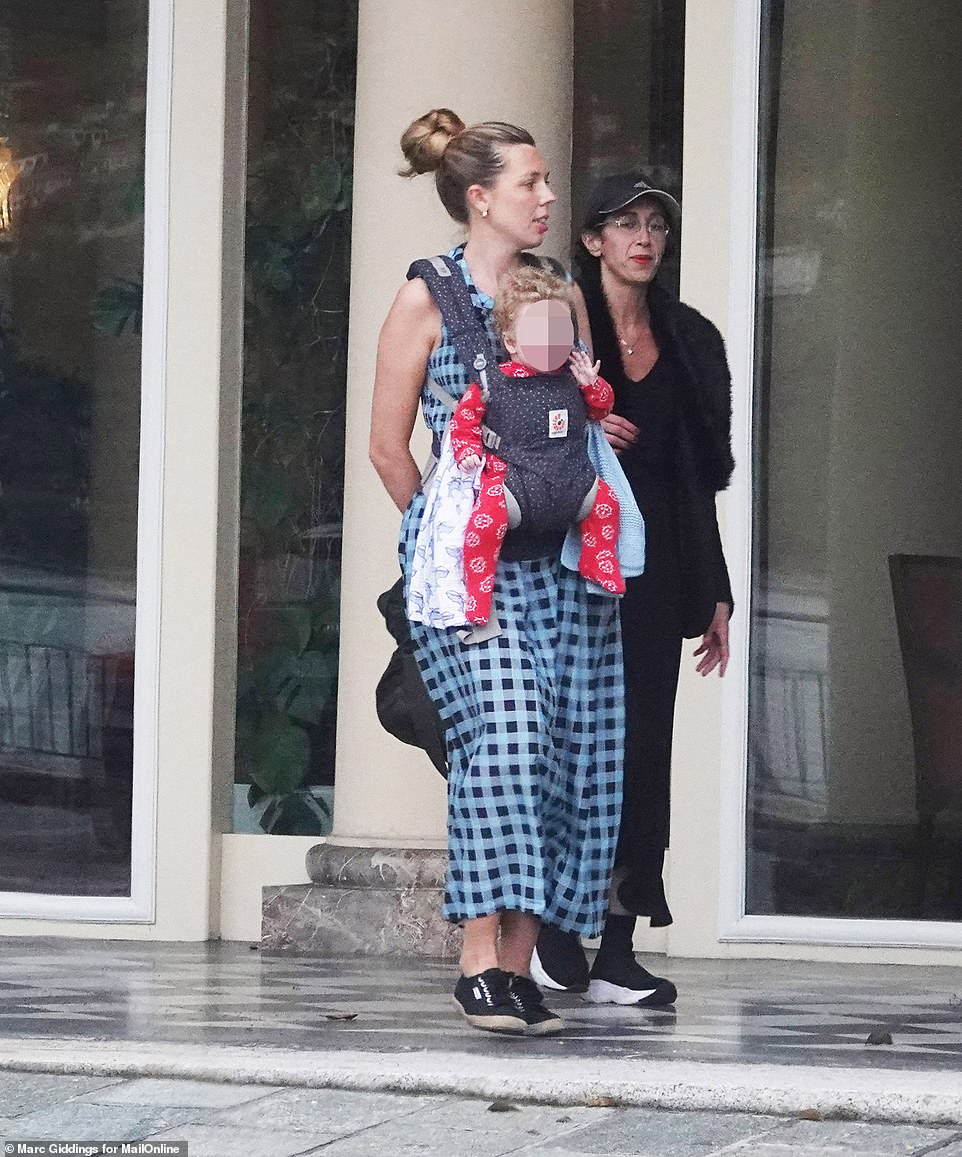 Carry, seen on her afternoon walk, is staying in one of the finest hotels in northern Italy, which is popular with rich Americans

Carrie and her friends were seated on the terrace at an outside table. The tables were spaced apart in line with appropriate social distancing. The waiters and all hotel staff were wearing masks. Guests are also required to wear masks in the public areas of the hotel and can only remove them when eating and drinking.

Before dinner the Prime Minister’s partner strolled along the promenade where she was able to take off her mask outside, taking in the view with Wilfred dressed in a red and white baby grow.

Mr Johnson’s son, with his distinctive shock of blonde hair like his father, took a lively interest in the scenery before dozing in his sling.

The onlooker said: ‘It’s such a beautiful hotel, I’m not surprised that she was having a good time. It was a surprise to see her on holiday, particularly as we are in the grip of a pandemic.

‘You notice it even if you are on holiday. The waiters and other staff wear face masks all the time. In the whole of the country they are being very strict.’

Mr Johnson is trying to see off a rebellion from some Tory MPs who want Parliament to have the final say on emergency coronavirus powers. 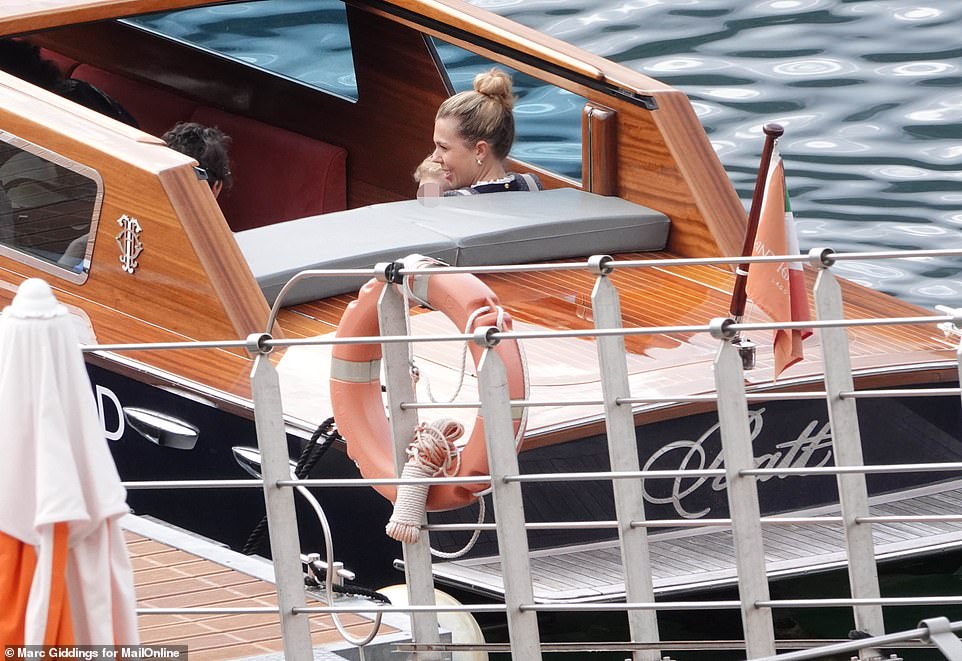 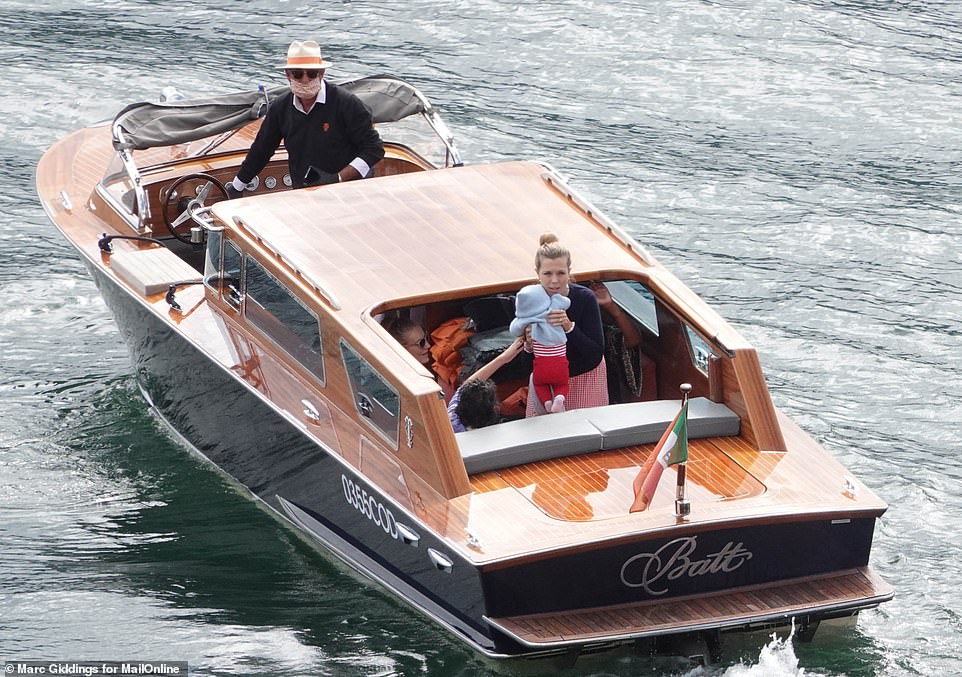 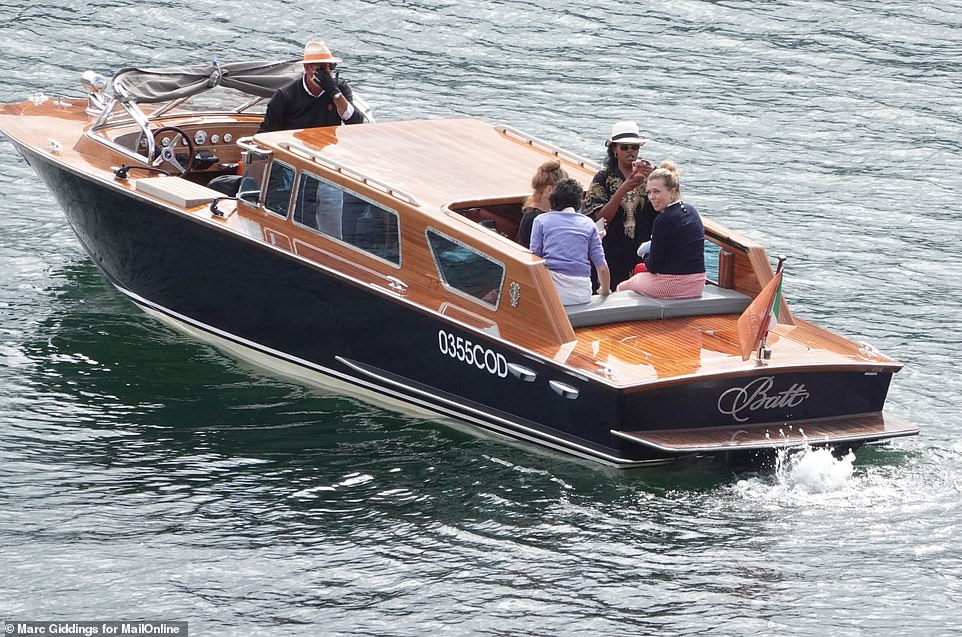