China's Foreign Minister Wang Yi has said that the deterioration in China's relationship with Australia is not something Beijing wanted to see and that he would like the relationship back on the right track "as early as possible".

However, Wang also said that the ball was in Australia's court, despite the Australian government repeatedly complaining that calls to Beijing to mend the relationship had gone unanswered. 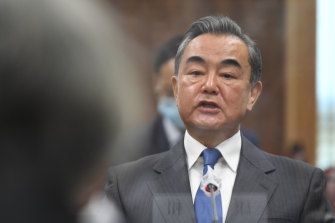 “I would kick the ball to Australia”: China’s Foreign Minister Wang Yi says the two nations can improve their relationship. Credit:Getty Images

The comments made during a conversation with former prime minister Kevin Rudd at a private event livestreamed two weeks ago offered hope of reconciliation even as the relationship between the two nations reached a new nadir.

Wang said Australia and China could again be partners, not enemies, on Saturday, December 19 (AEDT), just days after Australia asked the World Trade Organisation (WTO) to investigate the tariffs China had imposed on Australian barley in May.

The complaint to the WTO marked a formal escalation in Australia's year-long $20 billion trade stoush with the superpower, as China also imposed trade sanctions on Australian timber, wine, lobster and coal.

In late November, Prime Minister Scott Morrison extended an olive branch to China in a livestreamed appearance at a UK policy event, saying he was "happy to have a discussion" about the list of 14 grievances Chinese officials released to The Sydney Morning Herald and The Age.

But the relationship soured swiftly after Foreign Ministry spokesman Zhao Lijian goaded the Prime Minister by tweeting a fabricated image of an SAS soldier slitting the throat of an Afghan child.

Wang did not address the faked image or the 14 grievances in his conversation with Rudd, who is the president of the New York think tank Asia Society, which hosted the event.

At a public event streamed live on YouTube, Wang called for better ties with the incoming Biden administration, but in the following private session for 100 online guests, Rudd pressed Wang about China's treatment of Australia.

Rudd, who is fluent in Mandarin, asked if there was "a practical way in which we can also accommodate … a re-stabilisation of the relationship between Beijing and Canberra."

"And is there any role for any informal diplomacy in the meantime so that we can get both sides to put their megaphones away and get back to normal diplomacy?" Rudd asked, according to a transcript of the event obtained by The Sydney Morning Herald and The Age.

Wang said Australia needed to decide if China was a threat or partner but struck a more conciliatory tone than his "wolf warrior" spokesman Zhao.

"If Australia sees China as a threat, then the improvement of this relationship would be difficult," Wang said.

"If Australia sees China not as a threat, but a partner, then for the issues between us there are better chances that we find solutions. So I would kick the ball to Australia.

"We hope that the relationship can come back to the right track as early as possible and we would welcome efforts by all who want the relations to improve to make some efforts."

Wang expressed concern about the "largely negative" views about China being expressed in Australia, echoing the message from the list of grievances that criticisms by Australian MPS or news outlets was unhelpful.

"But when they are publicised, they will for sure affect the atmosphere for bilateral relations and that will discourage both sides to engage in further exchanges," Wang said.

A spokeswoman for Foreign Affairs Minister declined to comment, referring to Senator Marise Payne's remarks on December 19 on Sky News where she said: "We would never trade away our national interest. And that is a respectful approach to the relationship [with China], and to any bilateral relationship."

Rory Medcalf, head of ANU's National Security Colleges, warned that Wang's comments should "not be over-interpreted as some kind of positive signal".

"They are at best mild and conditional," Medcalf said. "Of course it’s nice at one level to receive some hint that China too would like a stable relationship, but the bottom line is that Wang’s words still place all the responsibility on Australia.

"There’s no admission that China bears any fault in the deterioration in ties, or even acknowledgement that it is using ongoing coercive measures – economic restrictions or hostage diplomacy – against countries like Australia and Canada.

"And in then end, everything seems to depend on how Beijing chooses to define how Australia treats and perceives China – as if there is a simplistic choice between all threat and all partner. That’s not a healthy starting point for pragmatic and mutually beneficially relations."

Peter Jennings, from the Australian Strategic Policy Institute, agreed and said there was "nothing conciliatory" in Wang's comments.

"He avoids any substance and simply says this is all a problem of Australia's attitude," he said. "But Australia did not invent China's military annexation of the South China Sea, nor did we invent China's full on cyber and human intelligence intelligence spying, or the growth of an assertive Chinese military, or the mass violation of human rights of minority groups in China."