Beijing: The principal of a kindergarten in southern China has been sacked after welcoming students back to the first day of the new school year with pole dancing.

First the principal, and then a female adult dancer clad in black hot pants and heels, performed the raunchy routine gyrating around a flagpole bearing the Chinese national flag, in the school's assembly square as families and students watched on.

“So before our kids got out of kindergarten for the summer, there was 10 days of military 'activities' and displays of machine guns and mortars at the door; now the principal has welcomed them back with a strip pole dance on the flagpole bearing the PRC flag. She's gone nuts,” wrote Michael Standaert.

The Bao'an education department released a statement later in the day saying multiple parents had complained about the kindergarten’s opening ceremony. An investigation had found the “flag pole” used in the performance was a steel pipe provided by the dance company. 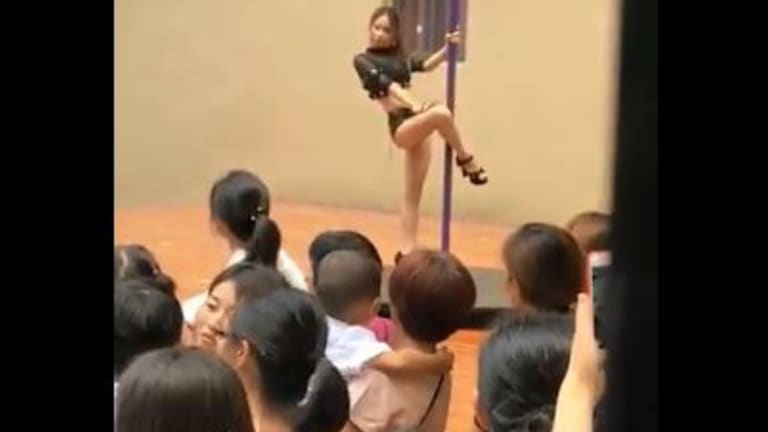 Parents were shocked to see the pole dancing routine performed in front of kindergarten students.

But in a nation where children's television is puritanically censored for immoral elements, including western influences, the dance itself, let alone the strip club outfit, raised eyebrows.

“The District Education Bureau believes that it is not appropriate to perform pole dancing for children in kindergartens,” said the bureau statement, which was shared on Chinese social media by thousands of amused people.

The top commenter on Baidu, China's version of Google, joked that they would like to enrol in the kindergarten.

Others said they had no problem with pole dancing but felt it wasn't appropriate in a kindergarten.
The company that owns the kindergarten was ordered to dismiss the director and apologise to parents.

Mr Standaert and his wife met with the company later on Monday. “It’s an understatement to say they’ve been getting a lot of complaints today,” he wrote.

The Standaerts were told the principal would be removed, after they said they wanted their school fees refunded.

The principal, who had performed one dance, belonged to the pole dancing school.