Doctor Who star Christopher Eccleston, 55, says he will end his life at Dignitas if he is diagnosed with the dementia that ruined his late father’s final years

Former Doctor Who Christopher Eccleston has said he would want to go to Dignitas to die if he diagnosed with dementia like his father.

The actor, 55, says for a decade the illness ravaged his father Ronnie, a former Salford factory worker, before he died in 2012 aged 83.

Mr Eccleston, the ninth Doctor Who, says he would go to the Swiss assisted dying clinic to avoid being a ‘burden’ to his children Albert, seven, and Esme, six, from his marriage to Mischka, which ended in four years ago.

The 55-year-old actor admitted he fears the vascular dementia that took his father’s life – and says when he looks in the mirror, ‘there he was, looking out at me’. 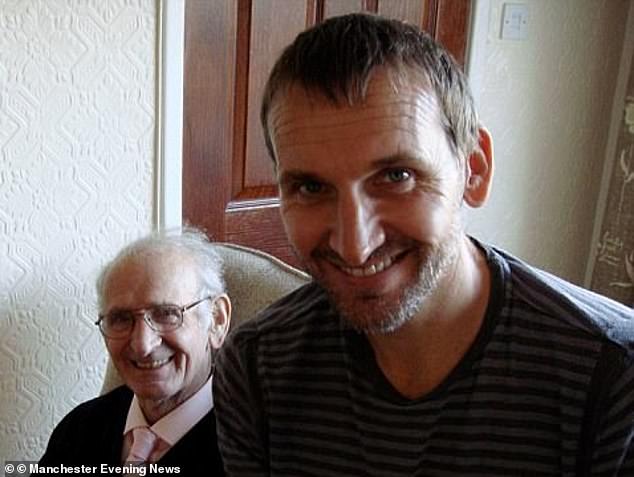 Actor Christopher Eccleston, right, has revealed he would end his life at Dignitas in Switzerland if he was diagnosed with dementia after watching the illness ravage his father Ronnie, left, before his death in 2012 aged 83

He told the Mirror: ‘I’d be petrified. But I just think about the burden. I’d want to go to Switzerland, I’d want an exit. Absolutely, Dignitas, that’s where I’d want to go’.

Mr Eccleston also revealed his fear of dementia stems from a family history, with the condition also affecting his grandmother on his father’s side and two of her siblings.

The actor said one of the most painful moments in his father’s decline was watching him try to remove his catheter in hospital and having to stop him.

He told the paper: ‘To witness someone become demented, someone going out of their mind. In the end you are reduced to an animal state of just existence.’

Mr Eccleston added he supported a Dignitas-style service in the UK because of ‘what he witnessed’.

Last month the actor, 55, admitted he considered taking his own life following the end of his marriage to wife Mischka in 2015.

He said he had battled an eating disorder for decades and was a ‘lifelong body hater’, but struggled to open up about his condition as it’s not what ‘working class men’ do. 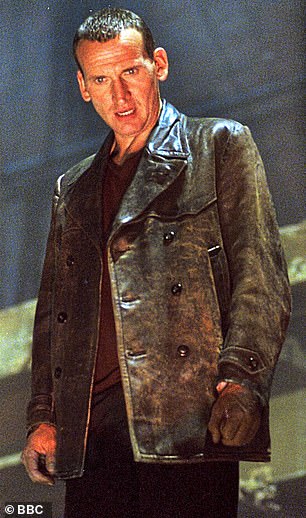 It comes after the former Doctor Who star, pictured on the show in 2005, revealed he has struggled with an eating disorder for decades in his autobiography

Writing in his new book, I Love the Bones of You, the actor said he also lived with the condition while filming Doctor Who.

The star played the ninth Doctor during the show’s revival in 2005.

‘Many times I’ve wanted to reveal that I’m a lifelong anorexic and dysmorphic,’ he wrote.

‘I never have. I always thought of it as a filthy secret, because I’m northern, because I’m male and because I’m working class.’ He explained that from the age of six he worried he had a ‘pot belly’ and ‘knobbly knees’.

A father-of-two, he was diagnosed with depression after splitting from his wife in 2015.

‘I was in a state of extreme anxiety, convinced I was either going to die or I was going to kill myself.

‘In my despair I reached for my phone and looked up a psychiatric hospital, I rang ahead, grabbed my bag and ran.’ Eccleston was prescribed antidepressants which he admits he could be on ‘for the rest of my days’.

‘I am on them to this day’, he explained. ‘I could be on them for the rest of my days. I do have an issue with that.

‘I would like to attempt slowly to reduce the dose, to experience reality again, to see how I do.

‘And yet, interestingly I have received some of the best reviews of my life since I started taking them.’ Beat, the UK’s leading charity supporting those eating disorders, praised the actor for speaking out.

A spokesman for the charity said: ‘It takes a lot of courage to speak out about an eating disorder.

‘Doing so helps to combat the stigma and misunderstanding that exists around these serious mental illnesses, especially for men and boys.

‘We hope that Christopher has received the support he needed and that his bravery will encourage others to seek help, as we know that the sooner someone gets help for an eating disorder, the better their chances of recovery.’