Adam Dickinson, 31, found the bizarre creature while on a day out with his wife and two young children. 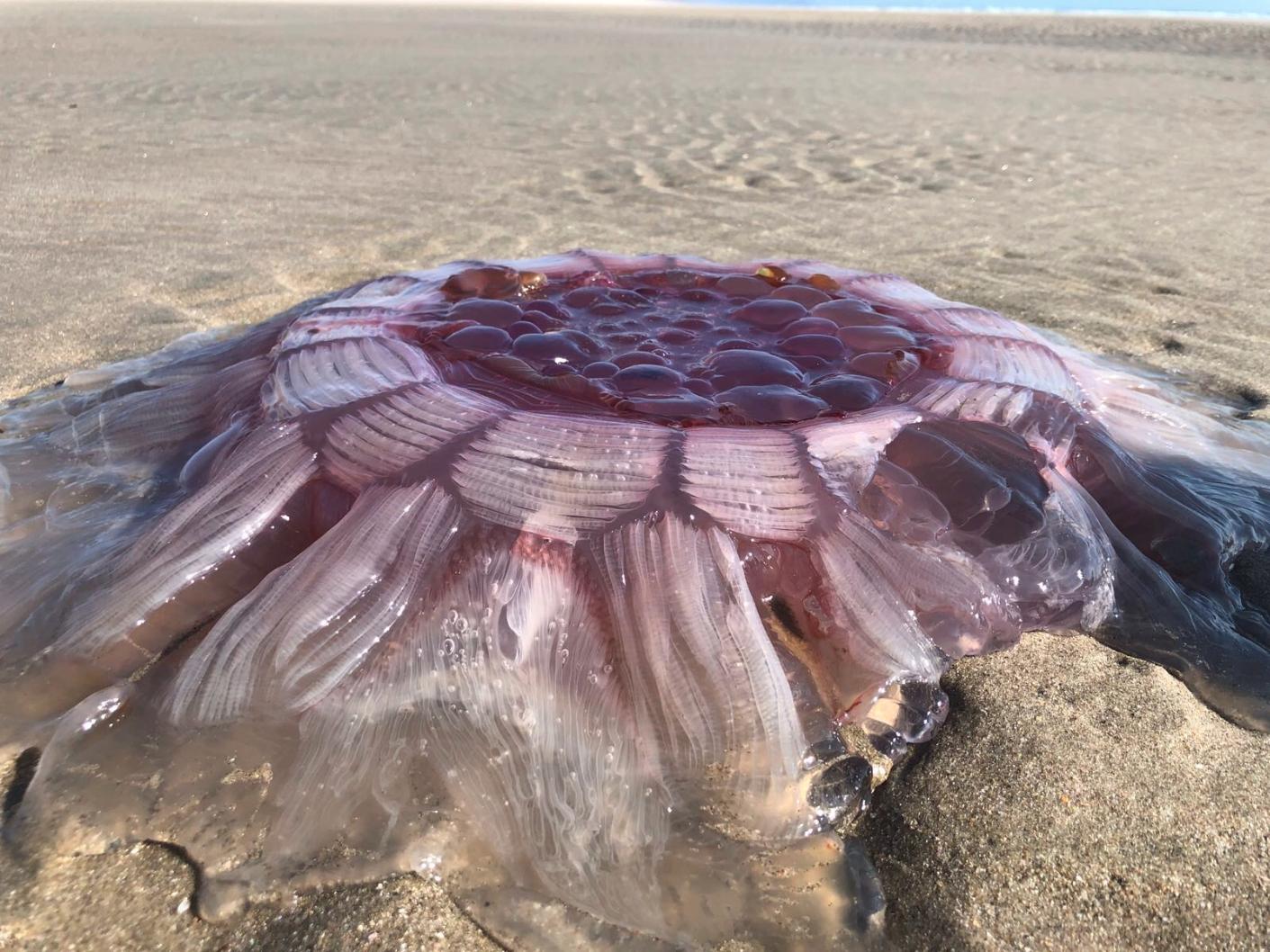 In photos it appears as a number of purple blobs arranged in a circle, bounded by a sun-shaped ring of white jelly.

Now the creature has been identified by New Zealand's National Institute of Water and Atmospheric Research as a lion's mane jellyfish – the world's largest known species of jellyfish.

When underwater the creature's tentacles can trail up to 190ft – longer than a blue whale.

Adam, who visited the beach with his wife Eve, 34, and his children Lucas, four, and Sofia, two, said the they came across the creature on Pakiri beach, 42 miles north of Auckland. 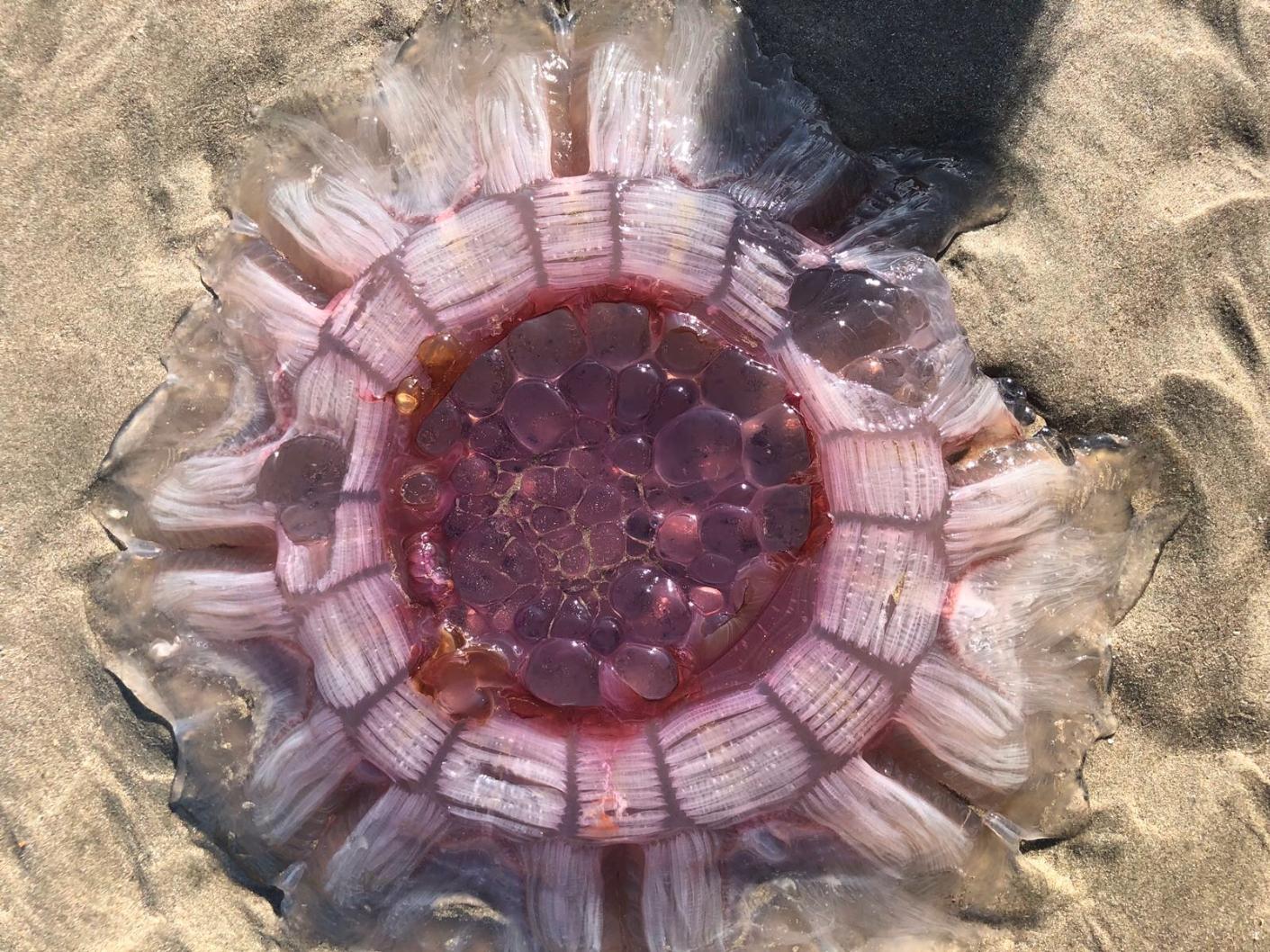 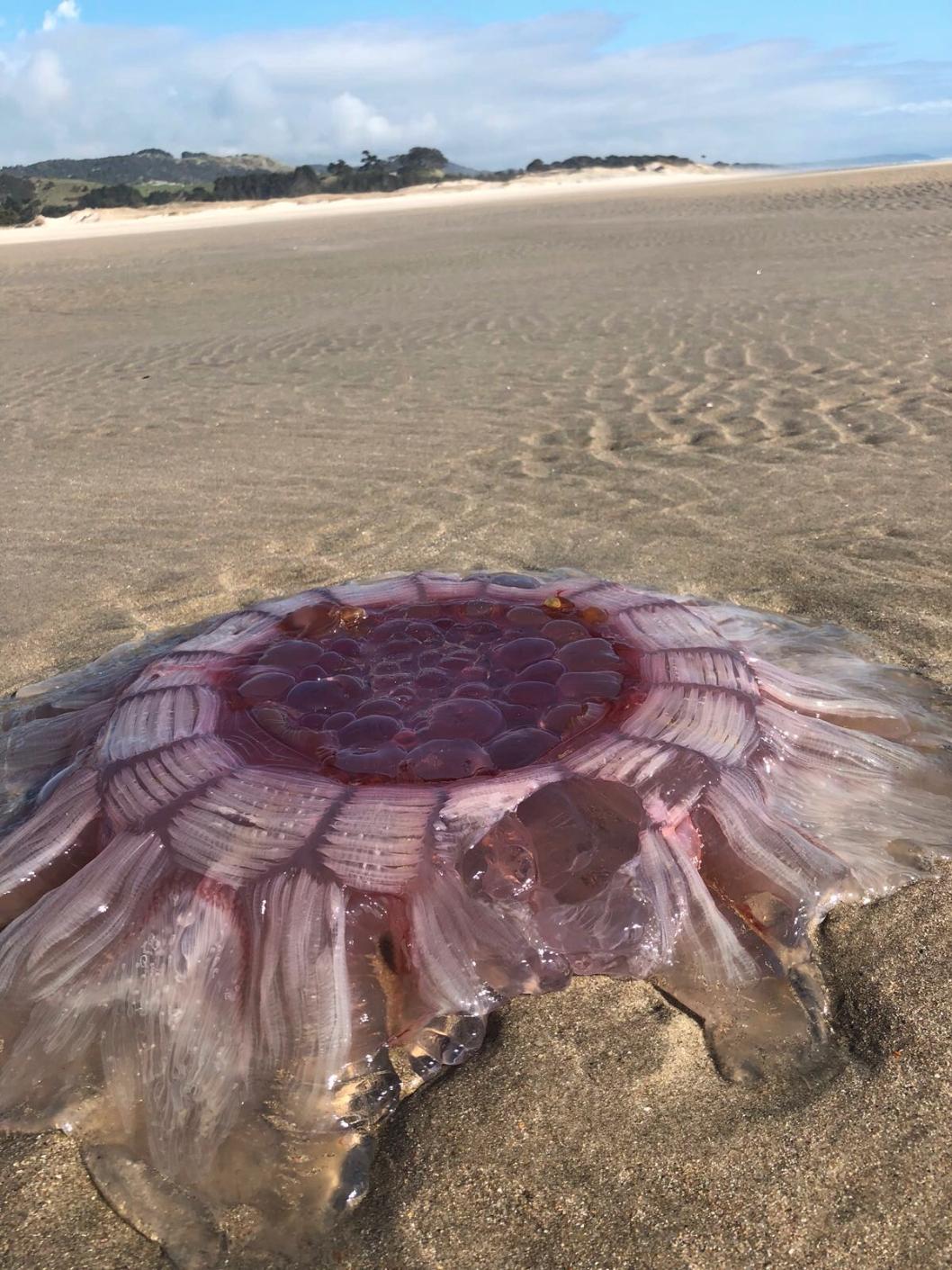 "We had been out walking and there was up to 100 jellyfish along the estuary and beach," said Liverpool-born Adam.

"At the end, after about an hour, we came across this one. It almost looked alien-like and was slowly moving or contracting.

"Our initial reaction was impressed, because it's an amazing looking thing."

And though its stings are rarely fatal, the large number of tentacles mean that medical attention is often recommended after exposure.

In July 2010, the broken-up remains of one such jellyfish were big enough to sting some 150 beachgoers near the US town of Rye, New Hampshire. 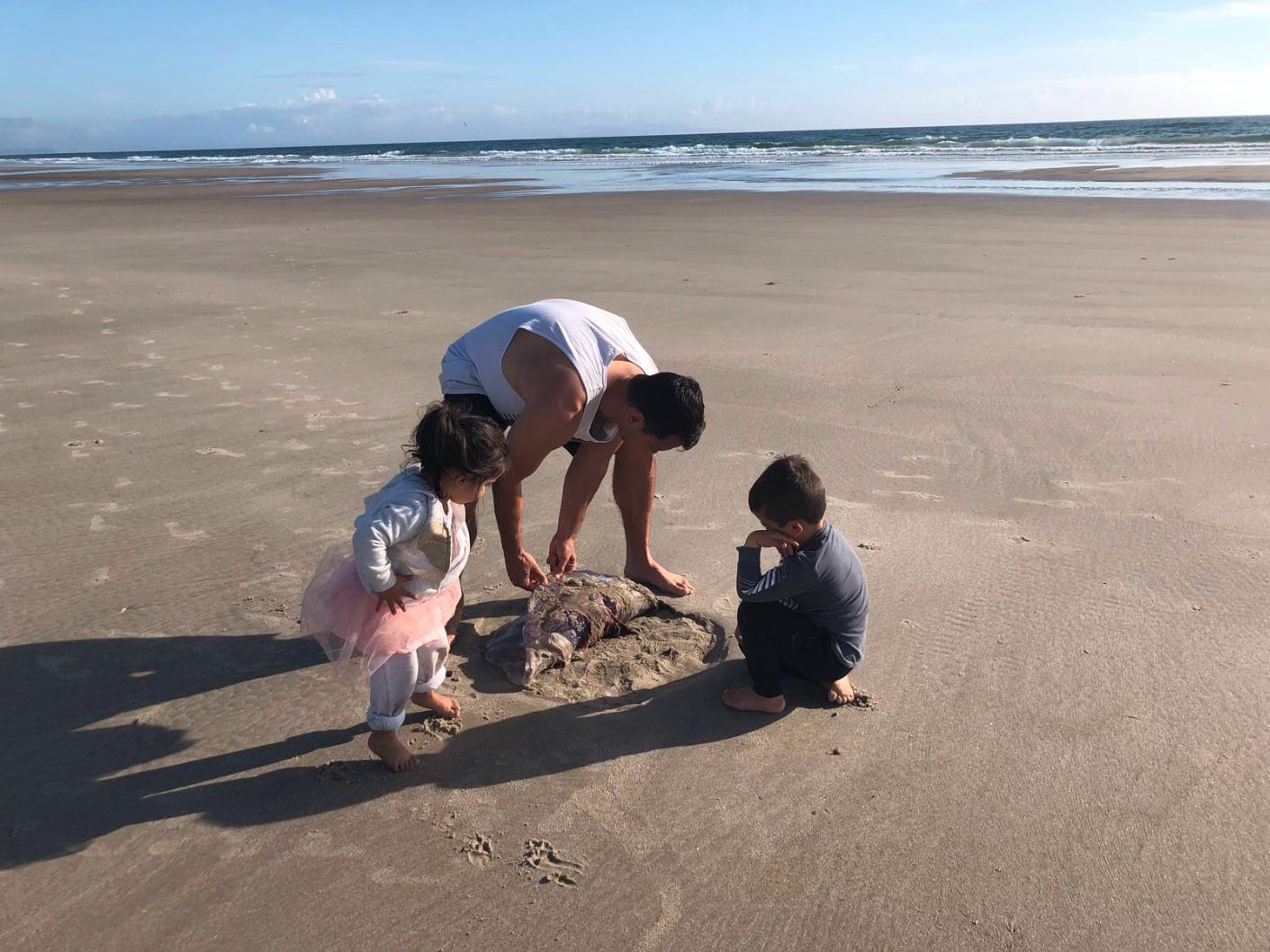 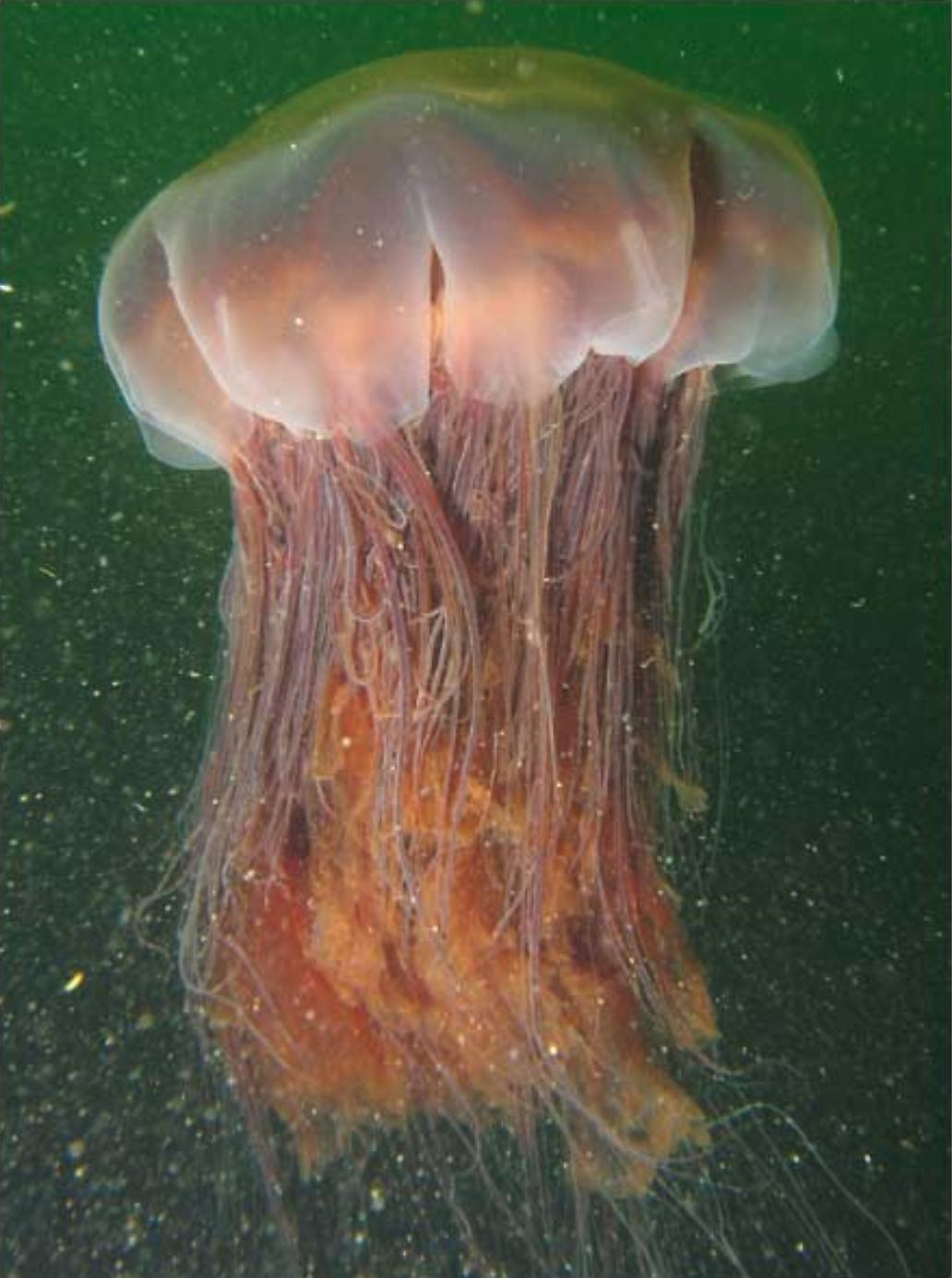 Adam said his kids initially ran up to the jelly fish to take a closer look with his son confirming it was still alive.

"They pack a hell of a punch, I have been told," said Adam.

"I had turned a few jellyfish upside down to explain to the kids not to touch the tentacles, but this was the only one I actually wouldn't touch.

The tentacles of the giant jellyfish reach can reach 190 feet in length – as long as a blue whale – and its body bell can have a diameter of up to 7 feet.

Is mouth is situated on the bell’s underside, surrounded by tentacles that are divided into eight clusters of up to 150 tentacles each, according to conservation group Oceana.

These tentacles contain poison which stun the jelly fish’s prey when they are enveloped.

The top of the bell is usually dark yellow or red in colour and thick in the centre, but thins out towards the edges.

The lion’s mane jellyfish also possess bioluminescent abilities, meaning it’s able to produce its own light and glow in the dark underwater.

Jellyfish actually thrive in areas that are affected by human activity such as climate change, pollution and overfishing, scientific research has suggested.

That reduces the jelly fishes main predators and competitors and increasing the number of the species on which prey.

"I have been here nine years and had seen nothing like that."

The lion's mane jellyfish is regularly seen in the waters of the English Channel, Irish Sea, North Sea and around Scandinavia.

While the lion's mane is the biggest jelly fish, the deadliest is the irukandji.

The irukandji jellyfish is almost impossible to see in water as it is about the size of a match head and has a transparent body.

A teenage girl bitten one off the coast of Australia earlier this year was in so much pain, she said begged her mum to let her die.