London: Britain has unveiled an unprecedented emergency response to the coronavirus crisis that includes £330 billion ($670 billion) in loans for struggling businesses and a program of state intervention in the economy "on a scale unimaginable only a few weeks ago". 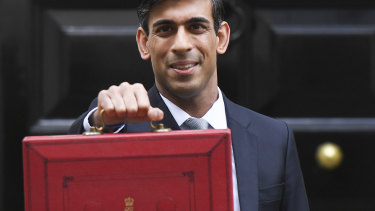 Chief scientific advisor Sir Patrick Vallance said on Tuesday there were probably already about 55,000 cases of COVID-19 infections in Britain despite the formal tally standing at only 1950.

Health officials are urgently working to free up about one-third of England's 98,000 hospital beds for incoming coronavirus patients and has suspended all non-urgent elective surgery for three months.

Vallance told MPs at Westminster that the government hoped to restrict the death toll to 20,000 but stressed that result would heavily depend on whether the public adhered to social distancing measures and pleas for whole households to self-isolate for two weeks if anyone in the home was symptomatic.

The UK government this week shifted its coronavirus strategy to “suppression” following warnings from a team of experts that Britain’s favoured “mitigation” approach would overwhelm the National Health Service and lead to 250,000 deaths.

Prime Minister Boris Johnson on Tuesday flagged the possible introduction of more "extreme measures" over the coming days on top of the existing advice for people to avoid non-essential contact with each other and stay away from pubs, restaurants and bars.

Johnson's own father undermined the Prime Minister's advice during a trainwreck morning television interview in which he said he would defy the public health warnings and continue to drink in pubs.

"Of course I'll go to a pub if I need to go to a pub," Stanley Johnson, told the This Morning program.

Challenged to explain that stance, he said: "Well, because the people who run pubs need a little bit of people – they don't want people to not be in the pub at all. That's my line."

Downing Street said on Tuesday it will relax planning rules to allow pubs and restaurants to operate as takeaway and delivery services during the pandemic.